Don’t throw Stones! Four Reasons why not to lay down the Law

A Commentary by Thomas Schirrmacher

(Bonn, 21.05.2016) In terms of language and in its very nature, worlds separate Amoris Laetitia on marriage and family from writings by earlier popes on sexual ethics, even if the official teaching by the church has hardly changed. The writing is more ordinary, sometimes even more facile, generally understandable, and oriented towards real life situations. The Pope expresses thanks for many contributions made which have helped him understand family (4) and rejects having one solution which is valid for everyone, i.e., doctrinal intervention (3). The document contains a lot of “self-criticism” (36). This is quite unique for a papal document, at least when one considers those prior to 2013.

A positive appreciation for sexuality and eroticism is found throughout, without there immediately being restrictions, as was common earlier. That has consequences, for instance when the Pope writes self-critically that a calling to love and mutual support has been “overshadowed by an almost exclusive insistence on the duty of procreation” (36).

The Pope refuses to make a universally valid decision upon the actual issues from the last two bishops’ synods in Rome, although both bishops’ synods asked him for that in the final document: “. . . I would make it clear that not all discussions of doctrinal, moral or pastoral issues need to be settled by interventions of the magisterium” (3). He essentially mentions four reasons for this stance:

1. Regional and cultural differences: “Each country or region, moreover, can seek solutions better suited to its culture and sensitive to its traditions and local needs” (3). The decentralization called for by the Pope, especially in Evangelii gaudium and in the final address at the Synod on the Family 2015, is continuing. Decentralization has already been radically put into practice concerning the annulment of marriages by no longer making the Congregation for the Doctrine of the Faith in Rome responsible but rather local bishops and respective pastoral care workers. What is already the case anyway has now officially been made possible, which is that the practice of Catholic pastoral care in Germany will now differ from that in Poland or in Africa.

2. Applying ideal requirements to concrete situations: The Pope writes: “For this reason, a pastor cannot feel that it is enough simply to apply moral laws to those living in ‘irregular’ situations, as if they were stones to throw at people’s lives” (305). A pastoral care provider has to look at each case individually and, at the same time, allow for compassion “from our awareness of the weight of mitigating circumstances – psychological, historical and even biological . . .” (308). For that reason, the Pope opens up the possibility that in individual cases those who have divorced and remarried might receive access to communion.

3. A plea for a decision based on conscience on the part of believers: An upward revaluation of conscience on the part of believers with respect to Church teaching is a thread running throughout the document (37, 42, 83, 222, 265, 298, 300-303), for instance in the case of communion for those who have divorced and remarried or in the case of contraception. Believers make the final decision based on conscience. Indeed, one can read all of this in St. Thomas Aquinas (1225-1274), the most significant Medieval religious teacher, whom the Pope quotes repeatedly. However, it was particularly under Pope John Paul II that conscience was seen just as the executive body when it comes to church teaching.

4. There is no such thing as ‘for life’: This has to do with compassion and with integration of the believer who has become guilty. “No one can be condemned for ever, because that is not the logic of the Gospel!” (297). According to the Pope, it can no longer be maintained that a believer living in what is an “irregular” situation is in the condition of mortal sin and living without grace (301). The judgment ‘for life’ has in a certain sense been done away with.

For the conservative wing of the Catholic Church, this document is a nightmare, as discussions on the web are demonstrating at the moment. In the place of non-negotiable legal norms binding in every individual situation, there are numerous reasons why priests and believers can deviate from the norm in individual cases. In the process, the change has serious consequences in that from this time forward it is going to be serious if not impossible for the Congregation for the Doctrine of the Faith to admonish bishops’ conferences or bishops themselves in the issues addressed. With this document, the church gives up a part of its supervisory at authority in questions of sexuality.

The Pope does all of this without at any point changing church teaching itself, as long as one does not want to see the emphasis on culture, individual situations, and conscience as a shift in the entirety of the Church’s moral doctrine in one go. This becomes clear when looking at the topic of homosexuality. It is not an agitating central topic of sexual ethics. Rather, it is almost treated incidentally, not more and not less than, for instance, cohabitation of unmarried heterosexuals, which is also not seen as corresponding to the ideal within the creation.

Ecumenically, the document opens doors in the direction of Orthodox and classical Protestant ethics – Karl Barth would have been delighted. More liberally oriented Protestants will be deeply disappointed, but large parts of the Evangelical world will understand the document to be a rapprochement with respect to their position: Biblically prescribed basic ethical positions and pastoral care applied to life and conscience are not seen as being in conflict with each other. Thus, I have argued in my book Leadership and Ethical Responsibility: The Three Aspects of every Decision that “commandment,” “wisdom,” and “heart” are all equally Biblically based sources for ethics. The Pope uses somewhat different terminology, but he is aiming at the same thing. From my conversations with him I know that it is precisely a matter of the following: preserving the breadth of divine interaction with people in Holy Scripture, which includes encouragement and admonishment, commandments and wisdom, doctrine and decisions of conscience.

Also, one finds that a rapprochement with other Evangelical and classical Protestant positions is taking place. The points of departures are consistently small Bible studies which are dispersed throughout the entire document. It is not only compassion which is emphasized; rather, God’s grace always comes first and humanity is not able to bring about God’s order and “covenant” without God’s continual grace (36, 37, 35). That which is typically Catholic has taken a strong step backwards. Even a long closing chapter about Maria including prayer to Maria, which had been typical of Pope Francis up to now, has yielded to a short “prayer to the holy family.” 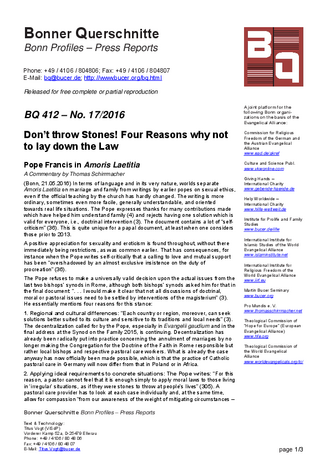