(Bonn, 27.06.2016) At the invitation of the Pontifical Council for Interreligious Dialogue (PCID), on the occasion of the fifth anniversary of the document “Christian Witness in a Multi-Religious World: Recommendations for Conduct,” officials from the Roman Curia and the Catholic Bishops’ Conference of Italy, representatives of the World Council of Churches (WCC) and World Evangelical Alliance (WEA), as well as scholars from African Traditional Religions, Buddhism, Hinduism, Islam, Jainism, Sikhism, Taoism and Tenrikyo met in Rome on Tuesday, 21 June, 2016. This document, published on 28 June, 2011, was a joint venture by the PCID, the WCC and the WEA. 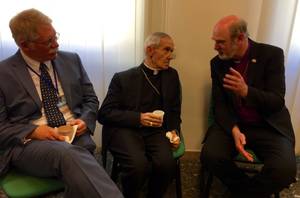 The keynote address by H. Em. Cardinal Jean-Louis Tauran, President of the PCID, was followed by a video message from Rev. Dr. Shanta Premavardhana, previously a staff member of the WCC. Reports on the implementation of the document were presented by Bishop Miguel Àngel Ayuso Guixot, for the PCID; Dr. Clare Amos and Ms. Kyriaki Avtzi, for the WCC; and Prof. Dr. Thomas K. Johnson, for the WEA.

In his statement Johnson claimed, “Codes for conduct, or codes of ethics, generally arise in response to a need. This was clearly true of the Ten Commandments. The need to which this 2011 code of ethics for religious persuasion—for propagating and promoting the faith—responded is the extent to which religious faith has been entangled with human conflicts since the dawn of history . . . Religion has long been associated with the mistreatment of people who do not have the same religion or the same religious experience, whether this mistreatment is in the form of violence, manipulation, or deception. In an astonishingly unified manner, the representatives of almost all Christians joined to address this ancient problem which has been amplified in our time by globalization. We could not say that we will not talk about our faith or invite other people to come to our faith, because the message that God is reconciling the world to himself in Jesus Christ is the most important news we have received; rather, what we have said is that there are recognizably good and evil ways of treating people when we talk about and promote our faith.” 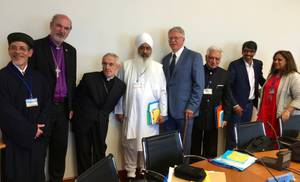 Johnson concluded, “In our age marked by extreme levels of religious persecution, religious violence, and religious terrorism, it is time to articulate the universal standards by which people of all religions can clearly distinguish the honest practitioners of their faith . . . Within Christendom we have done our homework and have written a code of ethics for Christian proclamation. All the people represented here today should continue on toward another history-making code of ethics related to the protection, proclamation, promotion, and propagation of all religious, philosophical, or ideological messages.”

Prof. Dr. Thomas Schirrmacher declared on behalf of WEA, that WEA would cooperate in any further step together with PCID and WCC, e.g., of further developing the document or starting further rounds of discussion in interreligious dialogue.

We offer the whole speech of Dr. Johnson for free use by the media.

Photo 1: Johnson and Schirrmacher in discussion with Cardinal Tauran

Photo 2: Some of the representatives of non-Christian religions with Johnson, Cardinal Tauran and Schirrmacher 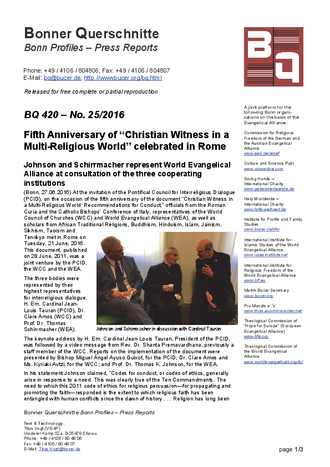