Still no Decision in the Malatya Murder Case

(Bonn, 02.07.2016) Although prospects are being held out for a decision for the bereaved and for church leaders, the court again did not come to a decision in Malatya in eastern Turkey in the 114th day of proceedings on Tuesday this week. The next day proceedings will occur has been set for September 28. On that day a decision is supposed to be given.

On April 18, 2007, Turkish Christians Necati Ayd?n und U?ur Yüksel as well as the German theologian Tilmann Geske were murdered in the offices of the Christian Zirve Publishing House. In addition to five young men who were arrested at the scene, there are also additional suspects charged with supporting the criminal act and with establishing a terrorist organization. Among them are the prior commander of Malatya's provincial gendarmerie, the retired colonel Mehmet Ülger, the chairman of the Malatya  provincial gendarmerie espionage committee, Captain Haydar Ye?il, Sargeant Murat Göktürk and Sargeant Abdullah At?lgan, a member of the teaching staff of the theological faculty of Malatya Ruhi Abat, and others.

According to media reports, attorney Ali Koç, who is representing the joint plaintiffs stated that far too little has been undertaken to find out more background information and to find possible instigators: “The nine years of legal proceedings, from the point of view of seeking truth and justice, have rendered a big zero. We are not expecting anything from judicial bodies. Hopefully we're wrong.” Hürrem Carolin Çevik, a lawyer also representing the joint plaintiffs, added the following: “This act of murder cannot have been conducted by five lone perpetrators. Someone must have been in the background.”

Susanne Geske, the widow of the German murder victim, who this time has again been following proceedings with her three children on site, first of all pointed out the adage hanging in the courtroom, “Justice is the foundation of the state.” In an interview she said the following: “On the first day of court, I believed in this saying. But so much has changed. My trust in justice has been shaken. The only thing I still believe in is God's righteous judgment.” She indicated she would be surprised if after nine years a “fair decision” were to be reached.

For this reason, Christians living in Turkey are again disappointed and very sobered, yet not truly surprised by the course the proceedings have taken. As has been stated to BQ by Evangelical circles in Istanbul, stalling tactics and other methods of delaying things are not uncommon. One has to assume that the real instigators are apparently not going to be found and made accountable. “When things have gotten too big, the independence of the courts has suffered very much in recent years.”

If the thought behind the murders was that the small Evangelical church in Turkey would be permanently weakened, this goal has thankfully not been achieved. On the contrary, the number of Evangelical Christians, also specifically those with a Muslim background, has grown in a sustained manner. Existing churches have become more internally stable over what is coming up on ten years, and in many, even smaller cities new churches have been founded.

In addition, there are concrete examples where people, due to the Malatya murders, have reportedly been brought to intensively reflect on their faith and have become Christians. The example could be brought of an older man who was a successful businessman and from a more conservative part of the city in Istanbul. As a pious Muslim, he is said to have asked whether these murders were able to be reconciled with Islam. After studying the Koran and Hadith (traditions relating to the sayings and acts of Mohammed), he came to the conclusion that in a certain sense it might actually be justified. He did not want to simply accept this result and went on to occupy himself with the Christian faith for which the three men in Malatya had been murdered. After intensively studying the Bible and having many discussions with Christians, he became a Christian and today belongs to a local Evangelical church. He lives out his faith and testifies to it in his surroundings, even if for this reason he has to accept many forms of hostility.

A good insight into the case can be found in an article by Till-Reimer Stoldt which appeared in the June 26, 2016 issue of the German newspaper

Die Welt. The title of the article is “Warum die Mörder eines Christen noch frei sind” (English translation of the title: “Why the murderers of a Christian are still free”). 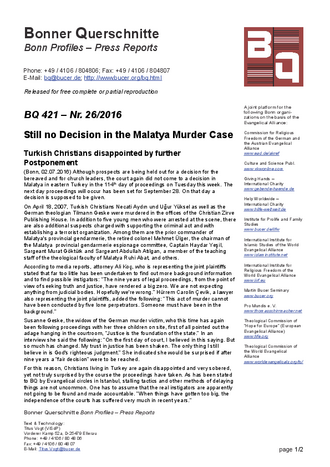