Why Christianity is an Emancipation Narrative for FranÃ§ois Lyotard

Philosopher James K. A. Smith has maintained for years that the ideathat Christianity is a grand narrative is simply a myth spread in Evangelical circles.1 According to the myth, Christianity is a Lyotardian metanarrative. Since a position of scepticism towards metanarratives is representative of postmodern thinking, the Christian faith would correspondingly have to behave antithetically towards Postmodernism.This antagonism, according to Smith, is the result of a superficial reading of Lyotard. A careful review of Lyotardâs writings on metanarratives can demythologise this âbumperstickerâ reading and demonstrates that Lyotardâs criticism of grand narratives does not apply to Christianity. On the contrary, Christians âshould find in Lyotard not an enemy but an ally orthodox Christian faith actually requires that we, too, stop believing in metanarrativesâ (WAP, p. 64). 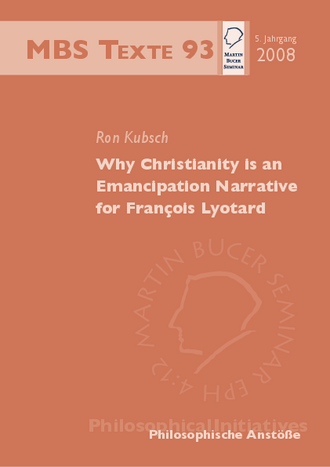