Martin Bucer Seminary Celebrates the Calvin Jubilee with a New German Edition of the First “Institutes.”

(Bonn, 02.01.2009) The Christianae Religionis Institutio, often called “The Institutes” for short, is the famous, main work of the Swiss Reformer John (Jean) Calvin (1509-1564) whose 500th birthday is being celebrated by so many this year. In German, as in many other languages, the last and largest edition of the Institutes, that of 1559, is the version that has seen almost exclusive use. But it was his first edition, that of 1536, that established Calvin’s reputation as a leading evangelical theologian, marked an important turning point in the Reformation, and also set the standard for a new type of religious/theological literature: that of the relatively short, personally engaged but theoretically sophisticated overview of Christian dogmatics and ethics. This first version is recognized to contain the key convictions, really the best theology and ethics, of the Reformation. 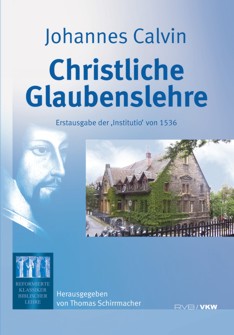 For this jubilee edition, the 1887 translation by Bernhard Spiess has been thoroughly reworked, with modernized spelling and grammar, a corrected and unified system of references and abbreviations, and new subtitles, making it a renewed and valuable tool for students, pastors, serious Christian readers, as well as any reader interested in a truly classical presentation of the evangelical faith.

Calvin’s books bore fruit far beyond the churches that have called themselves “Calvi­nistic” or “Reformed.” Many believers (and also the broader secular culture) were extensively influenced by his message. While Calvin himself tended to retreat behind his message, his “Institutes” is regarded by historians as one of the ten or twenty books that changed the course of history and the character of western culture. Martin Bucer Seminary is pleased to present this new version to the reading public with the hope and prayer that this wonderful little book can bear more fruit today. 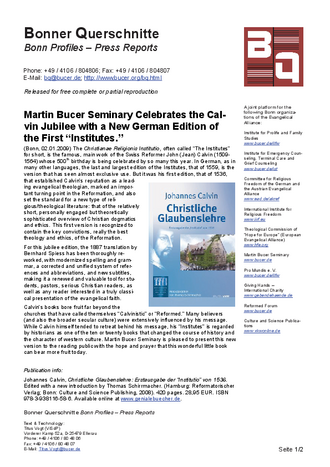