Offering forgiveness and reconciliation in face of severe persecution

New issue of the International Journal for Religious Freedom is published

(Bonn, 15.01.2010) The latest issue of the International Journal for Religious Freedom is available for download on the web, so that scholars all over the world do not depend on the printed version to evaluate the labour of the institute behind it. The journal is edited by the Cape Town Bureau of the International Institute for Religious Freedom under the direction of Dr Christof Sauer and Dr Mirjam Scarborough. The institute is affiliated with the World Evangelical Alliance. 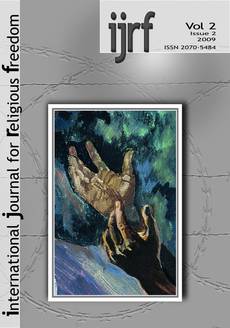 In a reaction to the vociferous criticism of the ban on building minarets in Switzerland, moral philosopher Professor Dr Thomas K Johnson, Prague, is appealing to Muslims to act as if they believe their own words about demanding freedom of religion and to respect it where they rule. His opinion piece appeared in the latest issue of the International Journal for Religious Freedom, which is about to be released.

The journal also documents the appeal “Free to Worship” by Christians from Muslim background. They call for global demonstrations in major urban centres around the world on Saturday 3 April 2010. They demand from governments and religious institutions to grant freedom to Muslim peoples to convert, to worship, to raise their children in the faith of their choice and to marry Christians. They seek to abolish the “crime” of leaving Islam, and they oppose the criminalisation of alleged “defamation” of all religions and Islam in particular.

Dr Richard Howell, the General Secretary of the Asian Evangelical Alliance (New Delhi, India), is reflecting on the killings of Christians in Orissa, India in recent years and maintains that forgiveness and reconciliation are the proper Christian responses to suffering and martyrdom. However “wrongdoing must be publicly and truthfully remembered and condemned, as well as forgiven.”

When it comes to acute persecution there are several legitimate biblical responses, according to Dr Charles L. Tieszen, namely to endure it, to avoid it, and to resist it. For those not immediately affected, solidarity is the proper response.

Sri Lankan lawyer Roshini Wickremesinhe (Colombo), who is the Director of the Religious Liberty Commission of the Asian Evangelical Alliance, analyses the role of government and judicial action in Sri Lanka in defining religious freedom. She reveals tendencies to harass churches on the basis that they are not registered, even though registration is not required. At the same time courts have denied registration to Christian bodies applying for it. There are arbitrary moves to restrict legitimacy of Christian religious institutions by state machinery, including the denial of their existence.

Prof Dr Dr Thomas Schirrmacher (Bonn, Germany), the director of the International Institute for Religious Freedom (Bonn, Cape Town, Colombo) and co-editor of the journal, discusses the relationship of Evangelicals and Christianity to modern democracy and the historical role of Evangelical Christians in establishing constitutions respecting religious freedom. This originally appeared in a widely circulated publication of the German federal parliament, where the evangelical scholar was given the unique opportunity to contribute after Evangelicals had been heavily maligned as a threat to democracy.

Dr Michael Hausin (Uhldingen, Germany) extensively analyses new efforts to unite in advocacy for religious freedom in Germany at a congress held in November. The journal also provides an authorised translation of the Schwäbisch Gmünd Call for Religious Freedom. This call is considered exemplary for its differentiated and constructive addressing of a Western government on religious freedom issues.

The International Journal for Religious Freedom (IJRF) is published bi-annually and aims to provide a platform for scholarly discourse on the issue of religious freedom in general and the persecution of Christians in particular. It is an interdisciplinary, international, peer reviewed, scholarly journal, serving the interests of religious freedom. It is available free of charge online, with a print edition offered for subscription. 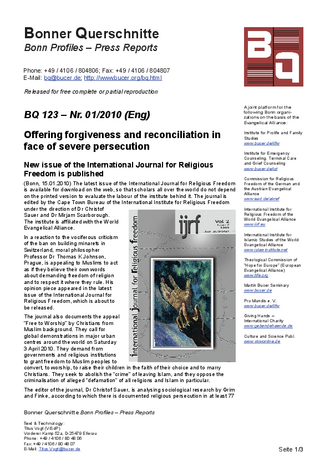