(Bonn, 19.02.2012) The German-language evangelical missiological society (Arbeitskreis für evangelikale Missiologie e. V.), which within the framework of the German, Swiss, and Austrian Evangelical Alliance brings together missiologists and researchers on global Christianity, has acknowledged the activities of Wycliffe Bible Translators and of Bible translators in general. The afem Chairman, Prof. Dr. Thomas Schirrmacher, emphasized that Bible translators around the world have delivered and still deliver enormous theological achievements which are largely ignored by members of the theological guild. Additionally, indigenous Christians are themselves increasingly more actively involved. Bringing the Bible into a new language and culture demands not only great linguistic proficiency (and nowadays also computer proficiency). Rather, theological ability and ample sensitivity are also required. The theological discipline of history of church and dogma should not only honor this as it applies to the past but also as it applies to the present.

Upon the occasion of its annual conference in the Forum Wiedenest association and its annual awards ceremony, afem invited the retired linguist and Bible translator Prof. Dr. Ursula Wiesemann to be the guest of honor at the awards ceremony and interviewed her in connection with that occasion. In recognition of her 55 years of work with Wycliffe Bible Translators, she was awarded a Chagall Bible. The afem had already previously honored Wiesemann in 2007 with a Festschrift entitled Mission as Communication (Mission als Kommunikation) upon the occasion of her 75th birthday. Her particular focus was putting oral languages into writing. Schirrmacher emphasized that Wiesemann thus contributed to the preservation of several languages and cultures in Latin America and Africa, which according to the opinion of experts would otherwise have been absorbed into by the culture shared by a majority of the population. Most well known is the example of the Kaingang Indians in Brazil. Wiesemann produced a written language from the innumerable dialects found in villages and groups throughout all of Brazil. That written language became the standard Kaingang language through the translation of the Bible and was the way in which cohesion between the various groups even became possible in the first place. This, according to Schirrmacher, parallels the consequences of Martin Luther’s translation of the Bible for Germany. 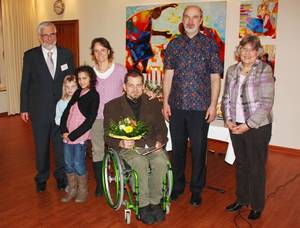 This year’s annually awarded George W.-Peters Prize (George-W.-Peters-Preis) for special achievements in the promotion of missiology was given to the linguist and theologian Eberhard Werner (Burbach, Westerwald) for his University of Wales dissertation published by the J. Kovac-Verlag with the title “Bible Translation in Theory and Practice: A presentation of Its Interdisciplinary Nature using the Example of the Practice of Education” (“Bibelübersetzung in Theorie und Praxis: Eine Darstellung ihrer Interdisziplinarität anhand der Ausbildungspraxis”). In the course of his work, Werner found out through a global survey among Bible translators that they make exclusive use of the translation method which they became acquainted with during their training. Alongside that, he compared the most significant translation methods. Finally he advocated teaching the three most common methods of translation so that the translator could later utilize the one most applicable in his field of activity. Werner is a staff member of the German branch of Wycliffe Bible Translators (Burbach, Germany).

The Austrian theologian Martin Podobri (Linz, Austria) received the 2012 George-W.-Peters-Promotional Grant (George-W.-Peters-Förderpreis) for his final thesis at the Institute for Theology and Church Development, which is the Austrian branch of the Martin Bucer Seminary. The thesis has been published by Culture & Science Publishing. Using the thesis, which carries the title “Transformation in Austria,” a seminar going by the same name was held at the annual conference. In the seminar he developed the basis for a comprehensively understood missions approach in Austria for free churches which would seek to dispel numerous taboos.

The prize is named after Prof. Dr. George W. Peters (1907-1988). The renowned American missiologist was active during his period of retirement from 1978 to 1987 in Germany and was the founding rector of the Free College of Missions in Korntal (Freie Hochschule für Mission), now called the Academy for World Mission (Akademie für Weltmission). He was also an initiator of afem.

As alternative reading or background material, we recommend the following article from the idea press service (idea-Pressedienst):

Revival Movements in Islam and Hinduism are experiencing an Influx

Bergneustadt (idea) – Within Islam there are thousands of people who are converting to belief in Jesus Christ without leaving the external confines of their community. A similar development is also occurring among Hindus, according to statements made by the Chairman of the Association of German Speaking Evangelical Missiologists e. V., Prof. Thomas Schirrmacher (Bonn), in a conversation with idea during the annual conference of the association in Bergneustadt (Oberberg District).

“It is difficult to assess whether what is involved is an enthusiastic flock of New Christians – or an implication of a situation where there is persecution,” according to Schirrmacher. In the face of an apparent pretense for violence through Islamic terrorism, many Muslims have distanced themselves internally from their religion. The turn towards Christianity is nearer to them than atheism on account of their monotheistic background religion. The leaders of revival movement in other religions are frequently disappointed by the western form of Christianity because they are unable to win their friends over to it. Believers of the so-called ‘Insider Movements’ would continue to go to the mosque and pray five times a day, albeit to Jesus Christ. Among missiologists it is disputed whether this movements represent an accommodation of the Christian faith to the local culture which eases life as a Christian or even first enables it, or whether in the process central contents of the faith are abandoned and they can no longer be viewed as a part of Christian mission.

The participants at the annual conference discussed the significance of the teaching of the trinity (the doctrine of three persons in one God) in missions work among Muslims in a segment carrying the title “God as Trinity – The Stumbling Block of Missions.” The question of whether a Muslim has to understand the divinity of Jesus Christ prior to his or her conversion, or whether God could reveal this truth to the individual at a later time, received diverse answers. Forty mission theologians and academically interested missionaries took part in the conference. “We want to bring Christians together who not only do missions but who also reflect upon the activity,” according to Schirrmacher. His understanding is that the association offers more opportunity for open and controversial discussion of missiological questions than do events within a missionary organization. About 200 missiologists and mission staff in German-speaking Europe belong to the association. It was launched in 1985 as a reaction to the efforts of ecumenical missiologists who sought to abandon the spread of the Christian faith in favor of development policy activities. The association publishes the journal evangelical missiology (evangelikale missiologie) on a quarterly basis and has a circulation of 1,000 sold copies. 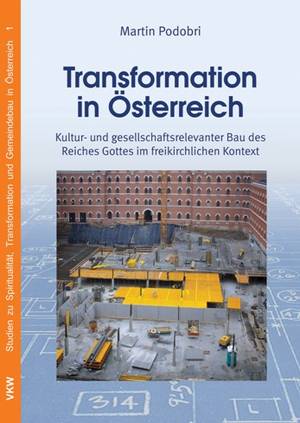 AfeM has awarded the 2012 George-W.-Peters-Prize (George-W.-Peters-Preis) in Bergneustadt. This main prize went to the linguist and theologian Eberhard Werner (Burbach/Westerwald), who holds a doctorate, for his dissertation “Bible Translation in Theory and Practice” (“Bibelübersetzung in Theorie und Praxis”). Werner found out in his research that Bible translators mostly employ the translation method which they learned during their period of training. He therefore argues the case for teaching all three of the common methods of translation so that the translator can utilize the one most fitting for his field of activity. The Austrian theologian Martin Podobri (Linz, Austria) received the Promotional Grant for his master’s thesis at the Institute for Theology and Church Development, the Austrian branch of the Martin Bucer Seminary. The thesis is entitled “Transformation in Austria” and develops the basis for a holistically understood missions approach in Austria. The prize is named after the American missiologist Prof. Dr. George W. Peters (1907-1988). Active in Germany from 1978 to 1987 in the advanced training of missionaries, he was the founding rector of the Free College of Missions in Korntal (Freie Hochschule für Mission), now called the Academy for World Mission (Akademie für Weltmission). He was also an initiator of afem.

Photo 2: (from left): The award winner Dr. Eberhard Werner with his family, along with the presenter of the award, Dr. Andreas Franz (far left) and the afem Board Members Thomas Schirrmacher and Hanna Schmalenbach (right) 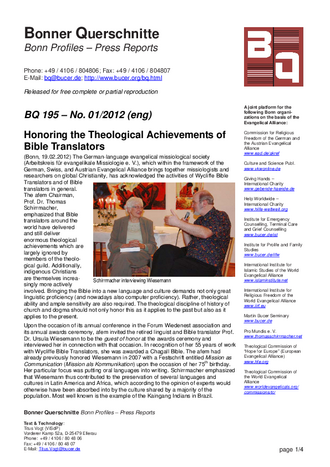