(Bonn/Gießen/Kapstadt, 02.02.2018) The Co-Director of the International Institute for Religious Freedom, Prof. Dr. Christof Sauer, welcomes in an extensive analysis that the “Ecumenical report on the religious freedom of Christians around the world” has renewed attention for the discrimination and persecution of Christians. 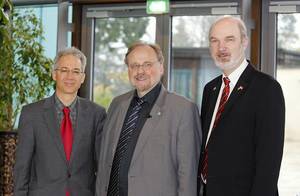 He especially highlights the contribution of the former UN Special Rapporteur on Freedom of religion or belief, Prof. Dr. Dr. h.c. Heiner Bielefeldt, Erlangen. Bielefeldt called the freedom to change one’s faith the litmus test of freedom or religion or belief.

Overall the Professor for religious freedom and the research of persecution of Christians at Giessen School of Theology, Germany, is recommending to strengthen the Christian and theological perspective of the report, in order to more inclusively cover the real experiences of Christians on the ground.

The report was presented in Berlin on 15 December 2017 by the two major church bodies in Germany, the “Evangelical (Protestant) Church in Germany” (EKD) and the German Roman Catholic Bishops’ Conference.

The analysis also deals with critical comments made about the World Watch List oft the international Christian agency Open Doors. Sauer sees a competition in interpreting discrimination and persecution of Christians which is reflected in differing terminology and emphases.

Interviews: Christof Sauer is available for interviews: christofsauer@iirf.eu or phone +27 21 783 0823. 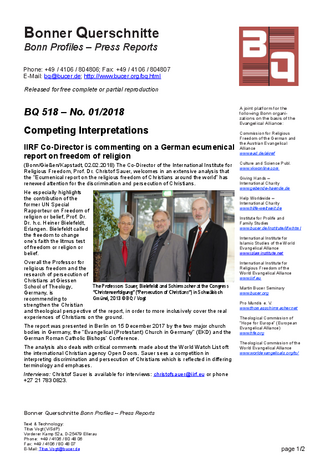