A most exemplary Reformer

(Bonn, 14.01.2009) Dr. George Ella, a Reformation History Lecturer at Martin Bucer Seminary and author of numerous biographies of less known Reformers, has recently completed a comprehensive Bullinger biography available via the British publishing house Go Publication. It is the first scholarly Bullinger biography written in English. This is all the more astounding since during Bullinger’s lifetime, numerous editions of his writings were published in English. At the time of the Reformation, Bullinger was by far the best known Reformer in English-speaking countries. In Calvin’s wake, Bucer and Bullinger are often forgotten, but long before Calvin they held to the Reformation’s teaching of grace. Ella refers to the fact that by their friendly and apolitical manner, they were shepherds in uneasy times who did not become inter-twined in politics, church politics, and even wars. Rather, they led their congregations as pastors through rough times.

Text by the publishing house 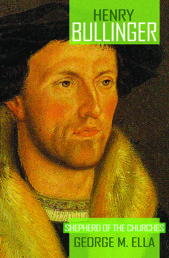 This biography of Henry Bullinger is the first full-length study of his life and works ever to appear in the English language. Today he is almost unknown amongst English-speaking Christians, yet he was the best known theologian in Britain during the entire Reformation period. Bullinger of Zürich, and the equally forgotten Martin Bucer of Strasbourg, reintroduced the doctrines of grace to the churches long before John Cal-vin took up his pen to write. Bullinger lived in dangerous times when the religious, political and cultural map of Europe was changing fast.

Yet his theological writings and educational reforms gave him a leadership role far beyond his native Switzerland. His vast correspondence secured him a favourable hearing in courts and universities throughout the continent. His Biblical studies in an age of reform forged a recovery of New Testament Christianity which shapes the church to this day. Yet Bullinger never forgot that he was first and foremost a pastor and a shepherd of men’s souls. Whether it was preaching to his own congregation or guiding the larger international flock who looked to him for supervision, Bullinger’s wise, sensitive and sympathetic advice won him lasting respect even in the camp of his opponents.

In Henry Bullinger the author has brought to us a man whose love for the Lord and dedication to the church of Christ will bear testimony to God’s goodness and grace as long as Christians value their history and study God’s word.

George M. Ella was born in England in 1939. As a student, he sat at the feet of Dr. Martyn Lloyd-Jones, Lawrence Barnard, James I. Packer, and John R. Stott. He stud-ied theology, history, library science, and linguistics. He has lived for the past 32 years in Mülheim an der Ruhr in Germany.

Mr. Ella has had held various lectureships, examination office positions and positions in library science. In numerous books he has investigated the lives, work, and theol-ogy of forgotten reformed theologians of the 16th to 18th centuries, including William Cowper, James Hervey, John Gill, Andrew Fuller, William Huntington, and Augustus Toplady. 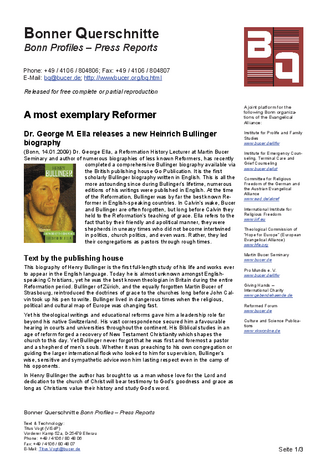