(Cape Town/Bonn, 31 January 2012) The International Journal for Religious Freedom (IJRF) has been included in the “Approved list of South African journals” effective as from 1 January 2012.

Prof. Dr. Christof Sauer as the editor in chief of the journal reports: “The Department of Higher Education and Training of the South African government, which administers this list, has just communicated the acceptance of IJRF on this list. We have been striving for this sought after accreditation since the founding of the journal in 2008. The criteria are very stringent and it is difficult to obtain”. 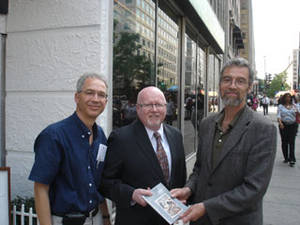 “In South Africa the recognition of a scholarly journal by the government is crucial for the status of a journal”, Sauer explains. “State subsidies for universities are partly based on the number of articles published by its academics in approved journals. So South African scholars usually prefer to publish in accredited journals.”

The issues of the IJRF were assessed by both the government department and the Academy of Science in South Africa (ASSAf) according to the National Code of Best Practice in Editorial Discretion and Peer Review for South African Scholarly Journals.

The IJRF aims to provide a platform for scholarly discourse on religious freedom in general, and the persecution of Christians in particular. The IJRF is an interdisciplinary, international, peer reviewed journal, serving the dissemination of new research on religious freedom and is envisaged to become a premier  publishing location for research articles, documentation, book reviews, academic news and other relevant items on the issue.

The journal is available for subscription as a print version and made freely available online with a delay on 1 March and 1 September respectively (www.iirf.eu). The IJRF is also included in the portfolio of the provider of electronic journals for libraries, SABINET.

A recent issue on “Advocacy and Law” was widely distributed on 4 continents by Advocates International and a number of other sponsors. The latest issue deals with “Religion and Civil Society”. 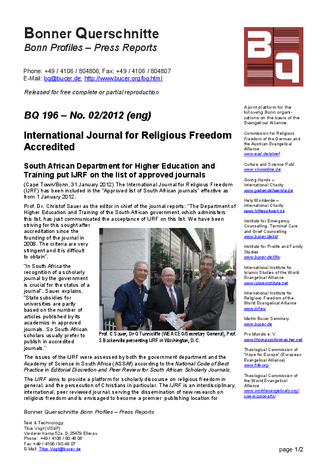