“From Adversaries into Allies”

An Interview with Czech psychologist and author, Pavel Raus, regarding his recently published book

(Bonn, 21.02.2012) This interview was conducted by Dr. Thomas K. Johnson on behalf of the Institute for Life and Family Studies.

BQ: Mr. Raus, we would like to congratulate you on the publication of your book!

Raus: Thank you for your interest.

BQ: Since many of our readers do not read Czech, tell us about the problems you are addressing in your book. 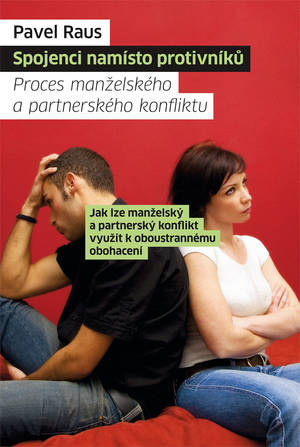 Raus: Because I have been doing a lot of seminars in churches, I was once asked by one church to come and help young people to prepare for their marriages. The church suffered several traumas in previous years when several marriages, even of church members, disintegrated. Young people were shocked and asked, “If that can happen even to Christians, what can we do to save our marriages before the problems arise? How can we secure our marriages when no serious problems have developed yet?” That led to a one-day seminar which was later done in many other churches. The idea was to learn to deal with conflicts. While spouses or even single people are still calm and can think, unlike in the real conflicts when they are strongly emotional and not always responding rationally, people can consider the different stages of conflict. Conflicts, especially the serious ones, do not appear overnight but have their own history. In a case where we can solve problems appropriately in the initial stages, we do not need to progress into the later stages when conflicts take power and become much more painful.

BQ: Tell us about those stages.

Raus: The book presents five stages through which conflict culminates. The tasks in those stages, and strategies to reverse the development of the conflict, are proposed in each of those stages. After a conflict has grown into a serious crisis, the book suggests three directions to end the crisis. The first direction is resolution, with it own distinct stages, in which personal transformation takes place while forgiveness and reconciliation lead to relationship reconstruction. The second is chronic conflict. The spouses no longer fight but the unresolved issue forms a gap between them and real intimacy is restricted. The third stage is marriage disintegration. Even if the marriage moves in the third route, there are stages in which still things can be overturned, though a specific plan is required to manage more serious change in the relationship.

BQ: Is the disintegration of marriage a big problem among Czech?

Raus: It seems like about half of Czech marriages end in divorce, which then becomes another cause of conflict and pain.

BQ: What do you hope to accomplish in the lives of your readers?

Raus: My hope is that spouses can learn by being exposed to the big picture of conflict development. Impatience, loss of hope, despair, and the feeling of being cornered escalate and dramatize conflict behavior and consequently worsen the fight. The hope is that once people understand, they will be able to see that their way out will be gradual and would be able to manage themselves while they seek the way out. Their expectations can be more realistic and they would manage their emotions and see the other side of the problem.

BQ: What else is important, in addition to understanding conflict?

Raus: What really makes a difference in a conflict are character and personal qualities. The book is not focused specifically on those qualities but it provides opportunities in different places to see their value and see how to work on them.

BQ: What are some of the competing voices that concern you?

Raus: During the communist time, and even now, one of the most influential family professionals was a psychiatrist who published several books and was also a popular speaker, Dr. Plzák. He himself was three times divorced and among his main theses was the view of an affair as an issue of the spouse who was betrayed and was jealous. The real issue, according to Plzák, was jealousy. As his advice to the betrayer he says, ‘Disclaim as long as you can!’ That perspective is still highly represented in the society. He still is considered a professional with authority. Our desire is to represent an alternative Christian voice, to bring Christian biblical values which better describe the reality which people experience.

BQ: What is the relation between your Christian faith and your approach to conflict? In what ways does faith relate to turning adversaries into allies?

The book has been written for the general public and does not require understanding of specifically Christian language or doctrines. The book is, however, written with Christian assumptions and is based in Christian values. Also, there are gradually developing allusions to the Christian message in the course of the book and even an invitation to the Christian faith in an appendix. The reason for this plan in the book is my conviction that conflict tests the hidden values and resources which we draw on. The Christian faith is our most important resource because first, the biblical description of God’s design for relationships best explains our experience; and second, the personal relationship with God provides stability and security during a crisis when other sources of security are under threat. That has been definitely my experience and it is my desire that readers may be able to have a similar experience.

BQ: You have our sincere best wishes for your book and all your efforts! Maybe we can get your book translated so we all can read it. 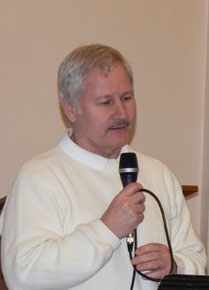 Pavel received dual masters degrees in theology and clinical psychology from Wheaton College in Wheaton, IL. He is now teaching at the Evangelical Theological Seminary in Prague, where he has also been head of Pastoral Care Department since 2002. He helped the ETS program for Pastoral Assistants to be developed and accredited.

Pavel is also head of Parakletos ministry which aims to support churches in the Czech Republic to be equipped for needs in the area of pastoral care and marital ministries. Parakletos has been working to help to marriages by doing seminars and conferences in churches and for the general public joined with marital counseling. Parakletos is also working with pastors, to support them and to organize seminars on the issues which they have to face. Additionally, Parakletos offers Christian counseling to both believers and non-believers.

Areas of interest for Pavel are marital closeness, marital conflict and communication, parenting, relationships, the role of father, biblical view of sexuality, and deeper intimacy with God. In all these areas of interest he is engaged in the integration of theology and psychology.

Pavel is married and has two adult daughters. 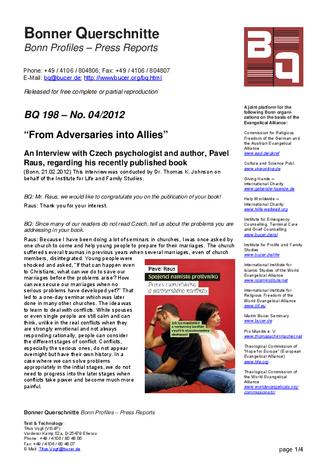