Great applause broke out when the coffin was carried into the church yard at the beginning of the worship service. Spontaneously the roughly 500 mourners belted out the chorus âThe compassion of the Lord never fails; his mercy never ceases,â taken from the biblical text of Lamentations 3:22, 23.

Shemza, Necatiâs wife, spoke in very moving but comforting words about the tremendous meaning of her husbandâs death. âHe died for Jesus, because he loved Jesus.â In spite of her great love for her husband, and while she looks forward to seeing him again in eternity with God, she said Jesus must be the highest priority in every personâs life.

Along with praise choruses, pastors from the entire land of Turkey paid tribute to the martyr. The Academic Director of Martin Bucer Seminary (MBS) in Turkey, Pastor Ihsan Ãzbek, who is also President of the Association of Protestant Churches in Turkey, forcibly and urgently rebuked the untenable accusations and reproaches which are constantly be raised against the Christian churches. But through a firm trust in the Word of God in the Bible and by means of an unshakable faith in the Lord Jesus Christ, the church in Turkey will continue its ministry, for the benefit of the people and the country.

The President of MBS Turkey, Pastor Behnan Konutgan (Istanbul), sent a written commendation in which, in his role as leader of the Turkish Bible Society, he described Necati Aydinâs ministry of Bible distribution in Turkey. Beginning in 2006, the Malatya team of Zirve Publishing House, led by Aydin, has been able to make 10,000 Bibles available to interested Turks. Konutgan hopes that now, after the tragic murder of three Christians, the word of the church father Tertullian will be fulfilled: âThe death of martyrs is the seed of the church.â

After the funeral the mourners (including the vice-president and the international dean of MBS who came from Germany for the funeral) traveled by bus under police protection to a Christian cemetery. There Necati Aydin was laid to rest, while the crowd was overwhelmed with emotion.

Necati Aydin was born into an Islamic family in the Izmir area and came to a living faith in Jesus Christ in 1994. For many years he openly and actively confessed his faith, and for this he was repeatedly condemned by Muslims. In 2000 he spent four weeks in jail for distributing Bibles from a booth on the street, even though this is completely legal in Turkey. He was released from jail because no one found that he had done anything wrong. He was not able to enjoy the judgment of the European Court of Human Rights, to which he had appealed his case. Necati also played the role of Jesus in a large theater production, which was repeatedly held in major Turkish cities.

A few years ago Necati moved to Malatya, where he became pastor of the local Kurtulus Congregation (part of an association of churches led by Pastor Ihsan Ãzbek). He also became a staff member of Zirve Publishing House, which is a Christian publisher based in Istanbul with distribution offices in various Turkish cities.

Last October he began his studies at the MBS study center in Ankara, to be equipped for his ongoing pastoral ministry. He is survived by his wife, Shemza, and their two children, Esther (age 5) and Elisha (age 7).

Martin Bucer Seminary is a European theological school with branches in Germany, Switzerland, Austria, the Czech Republic, and Turkey, which seeks to make the maximum possible use of local leadership. The study program in Turkey is taught in English and in Turkish.

The president of Martin Bucer Seminary, Prof. Dr. Thomas Schirrmacher, wishes to thank the worldwide Christian community for the many expressions of condolence the seminary has received. The solidarity of the students has been overwhelming. The seminary has opened a special support account to assist the survivors of the victims and to help protect the local church. All contributions will be directly sent to those in need, without any administrative fees being deducted.

The bank information for this special support account is:

If you want to contribute to this special fund but are not familiar with the German banking system, please contact the German to English translator of this report, Thomas K. Johnson, Ph.D. Email: 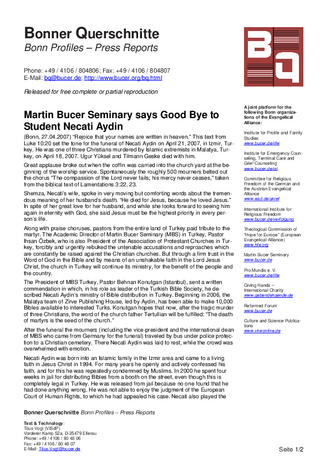