An Interview with Thomas Schirrmacher, President of Martin Bucer Seminary and Director of the International Institute for Religious Freedom.

World Evengalical Alliance: First let me express my sympathy at the murder of one of your students.

Thomas Schirrmacher: Thank you. The local Protestant believers will treasure the international solidarity.

WEA: As Director of the International Institute for Religious Freedom you have been researching religious murders, and suddenly as President of Martin Bucer Seminary you are confronted with the murder of a student. Was this a new experience for you?

TS: We receive daily reports of religious murders, especially murders of Christians because they are Christians, but also murders of adherents of other religions, though that is not so frequent. That does not leave a person untouched. We have interviewed many survivors and witnesses, and in spite of our duty of academic seriousness, their stories often touch our hearts. But you are certainly right: This direct confrontation with a murder, which influences friends, students, and colleagues, is something totally new for me. An area of academic specialization has suddenly become the hard reality of life. Our staff members know the victims, know the survivors and the relatives, know people personally who are now afraid for their lives. This time, I simply cried.

WEA: Had you considered the possibility of these developments?

TS: Yes and no. On the one hand, it almost had to happen, given the way the tiny Protestant or Evangelical minority has been subjected to uninterrupted and unrestrained slander and conspiracy theories coming from the highest levels in the government. For example, that the CIA has sent 25,000 missionaries to Turkey to prepare the way to overthrow the government or to turn the Turkish people away from the Turkish national character, is considered everyday knowledge to many people. In spite of tensions between the Islamicists and the Nationalists, the one thing on which they strongly agree is their dislike of Turkish Christians. And especially those Christians who were previously officially Muslims (though in fact they may have been more atheistic or secular) bear the wrath of the Turkish authorities and population, which happens in much of the world.

On the other hand, just a week before the murders, we had an evaluation of the situation in Turkey with the board of the International Institute for Religious Freedom. We were concerned about some dangerous tendencies, since more and more local and international Christians are being beaten on the streets, but we were at least certain that foreign Christians were not in any serious danger. We thought there was at worst a possibility of an attempt at arson on Christian institutions. We were fundamentally wrong.

WEA: Do you think the Turkish Protestants will once again go underground?

TS: The Protestant church leaders have made a clear and unequivocal decision to become ever more public with their faith, which was already evident in the funeral of Necati Aydin. In light of the real dangers, this is startling.

WEA: What about your theological education center?

TS: Of course we have discussed this within Martin Bucer Seminary. On our (German) side there has been real concern, but our study centers stand under local leadership so far as is possible. Our Turkish MBS leaders are Ihsan Ãzbek, who is the MBS academic director and president of the Association of Protestant Churches in Turkey, who lives with murder threats, and Behnan Konutgan, president of our Turkish board, who has been frequently questioned by the police. Together they have given a clear signal that a suitable theological education for their pastors is more important than it has ever been, and they do not want to hide what we are doing. We will give them our undivided support in this decision.

WEA: Might Christians in Turkey, and especially the evangelicals, be too aggressive?

TS: Really you should say that to the Turkish Christians themselves! They are not little children that we (in Germany) can order about, to do this or that. These are mature people who are making a claim to use their freedom of speech according to the laws that are supposed to be in force in Turkey. And, of course, in Christianity there is no longer any missionary colonialism. The churches in each area must decide for themselves exactly how far they can go when they encounter brutal and violent antagonism.

Honestly, you should get to know the Christians from that area if you want to say something about them. âAggressive,â whatever that term may mean, is certainly not a good description. They are all Turks who know how to behave in their land, who do not want to risk their lives unnecessarily, and who want to advertise the love of Jesus. Only in Turkey does this happen: a Muslim buys a Bible from a shop, and has to do this of his own free will, then someone complains about âoverly aggressive missions,â and the press simply parrots a phrase they do not understand. Is the Pope too aggressive about his mission in Germany, simply because he offers his book for sale? No one is forced to buy his book!

WEA: Why do the non-Protestant churches in Turkey seem to get along better with the State?

TS: After the murder of a Catholic priest and the murder of an Armenian journalist no one will be able to say that the Turkish Nationalists and Islamicists really distinguish between the different varieties of Christians. In their mind, a Turk really has to be a Muslim, whether pious or secular. The limited freedom of religion known by the old established churches in Turkey during the time of the Sultans is gone. The âsecularizationâ of Turkey may have helped some people, but it has not helped Christians.

Of course there was once a historical compromise between the old established churches within the Islamic world and their Muslim overlords. These churches were, at best, tolerated so long as they renounced missionary activity toward Muslims. For example, for some centuries the Coptic Church in Egypt has only worked with Coptic people, not with Muslim Egyptians. If a Muslim converts to Christianity, it is impossible for that person to be accepted by the churches of the established Christian minority. For that reason, Orthodox priests in Egypt or Turkey often send their converts to a Protestant congregation, which often consists largely of converts from Islam.

WEA: After these events, do you think we should stop the negotiations with Turkey about joining the EU?

TS: This question is not easy to answer. The separation of church and state is important to me as a Christian ethicist. As a church member I would say: only admission to the EU will provide the long desired freedom of religion for Christians in Turkey, for which they have long prayed. As members of the German church we must not deny this hope just because of economic considerations. (Translatorâs note: EU membership for Turkey could be extremely expensive for the wealthier EU states, especially Germany.) In comparison with the suffering of other Christians, my retirement pension means nothing. And that millions of Muslims could move to Germany should not be a threat to a living, missionary church.

At the same time the EU states may not notice the way in which they are being misused for internal Turkish power politics. From the standpoint of the state, the entrance of Turkey into the EU would bring so many uncertainties, that it really needs to be carefully pondered. The idea of a privileged partnership would certainly be a good political compromise that would enable or even compel more freedom, but which would not make Turkey an irrevocable part of the EU, whether or not radical Islam wins the upper hand within Turkey.

WEA: Thank you for the interview.

German to English translation of this text was provided by Thomas K. Johnson, Ph.D., Fellow of the International Institute for Christian Studies 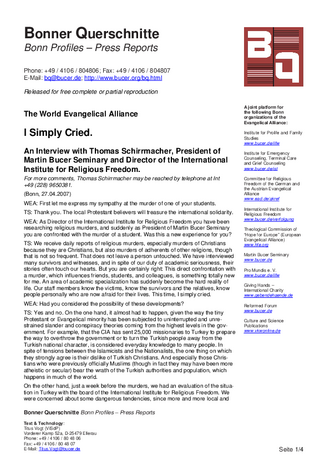