Autopsy reports from the Martyrs in Malatya not yet public

(Bonn, May 7, 2007) The district attorneyâs office responsible for investigating the mur-ders in Malatya has not yet released the autopsy reports. Some reports in the Turkish media, which have given the impression that the reports were in hand, merit severe criticism.

According to statements from associates of Susanne Geske, widow of the recently martyred missionary Tilmann Geske, she was allowed to see the autopsy report while accompanied by her attorney. She told her friends and colleagues that the widely circu-lated media report that her husband suffered 156 knife wounds was clearly not correct; the autopsy report spoke of 15 or 16 knife wounds. The possibility that she was shown an altered autopsy report seems to be excluded: Mrs. Geskeâs statement has been confirmed by a similar report by Ahmet Guvener, Pastor of the Protestant congregation in Diyarbakir.

In a letter dated April 30, Pastor Guvener wrote that he had the opportunity to see Til-mann Geskeâs upper body when he picked up the body from the morgue to take it to the funeral. He wrote, âI saw no knife wounds, only a slit of about 8 or 10 cm. in Tillmanâs throat.â He described the reports according to which the victims had cuts on their noses, ears, and lips as ârumors which do not reflect the truth.â Another Christian, Ed Grudier (Adana) also had the opportunity to see Tilmann Geskeâs body. He is quoted in the letter as saying that he saw only three or four knife wounds. A third wit-ness, Pastor Ihsan Ãzbek, had the opportunity to see the upper bodies of T. Geske and N. Aydin and does not confirm any large number of knife wounds. Pastor Guvener suggests that Grudier saw a small number of knife wounds because he may have examined the corpse more carefully than did Guvener or Grudier. No Christians saw the body of Ugur YÃ¼ksel because his (Muslim) family retrieved the corpse on the eve-ning of his death for immediate burial. Guvener wrote pointedly that he cannot believe the excessively detailed descriptions of torture, since such torture would have made it impossible for YÃ¼ksel to live until 17:30. Guvener summarized his assessment: âYes, the brothers were tortured, but not to the degree which some have said.â This report was described by Pastor Ihsan Ozbek, Pastor Zekai Tanyar (Izmir) and by Ed Grudier as accurate and helpful to âcorrect unfounded exaggerations.â

The family of Nacati Aydin reports that they have not yet had an opportunity to see the autopsy reports, but they agree that the reports of the large number of knife wounds need to corrected in a downward direction, and they accept the report of Ahmet Guve-ner as trustworthy.

There are some very serious questions about how and why some matters are being reported in the Turkish media. In addition to the misleading number of knife wounds reported as if they had come from an autopsy report, there have been reports of de-tails that sound as if they have come from an interrogation of the attackers, but the official reports of those interrogations have not yet been made public. For this reason our âBonner Querschnitteâ report (which was based on Turkish media reports) of up to â156 knife woundsâ has to be completed revised and corrected. (See BQ 33a.) It is certainly correct that the Turkish media reported this number, but it is now very uncer-tain if this Turkish media report corresponds to what truly occurred. Real certainty about the number of knife wounds and the extent of the torture, if possible at all, will only come by means of the as yet unpublished autopsy reports. Other than these de-tails, BQ stands by our previous report (BQ 33a) on the overall course of events in Malatya, which was based on our own research.

The correction and repudiation of âunfounded exaggerationsâ mentioned above, written by Pastor Guvener and confirmed by other leading Turkish pastors, applies also to some parts of a âLetter to the Global Church from the Protestant Church in Smyrnaâ*, which has been widely circulated in German and English via email. The publishers of Bonner Querschnitte want to specifically endorse the careful reports of Pastor Guvener and his colleagues, and by so doing we are joining in the criticism of the reports about massive numbers of knife wounds and unbelievable torture, as those reports came from the Turkish media and certain email reports that were careless about important details.

* Addition May 5, 2007: the criticism following refers tot he first version of this report  (April 24, 2007), which was circulated by e-mail in Germany. Bonn Profiles received only this e-mail version. 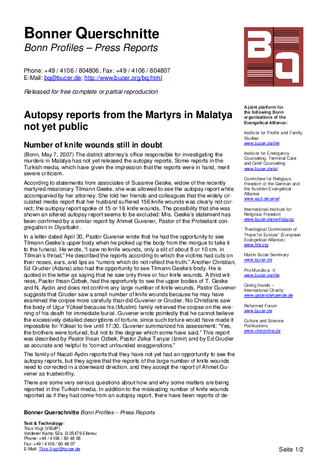