An important new book about the Russian-German resettlers in Germany

(Bonn, 02.03.2009) This book, originally a doctoral dissertation at the University of South Africa, is the first scholarly study of Russian-German “Free Church” (Freikirchen) groups, including Catholics, Lutherans, Baptists, Pentecostals and Mennonites. It was the German chancellors Konrad Adenauer and Willy Brandt who came to agreements with the Russians according to which Germans of the Soviet Union would be able to resettle in Germany, their original homeland. For Klassen, who himself left the Soviet Union after the Second World War, writing this book must have been a labor of love. Beside his heavy work load as a teacher and pastor among the resettlers (Aussiedler), he worked for years researching the life and religious practices of his countrymen. 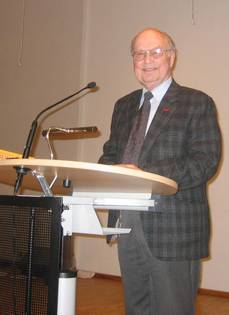 The book is divided into four major parts with several subsections. Part 1, the historical part, deals with German farmers and craftsmen leaving their homeland in the 18th and 19th centuries at the invitation of Empress Catherine II (the Great). In the new country the settlers built their communities, farms and businesses and were able to practice their faith freely. They were also exempt from serving in the Russian military, which was especially appreciated by the pacifist Mennonites. Because of their privileged position in Russia, the German settlers loved the German-born empress and all subsequent Russian tsars.

The First World War (1914-18) and the subsequent communist revolution of 1917 changed the life of the Russian Germans dramatically: almost all lost their property to the state as well as their freedom to practice their religion. Entire communities were uprooted and their religious leaders were exiled and many were shot. Yet during their life in the Gulag, the Soviet-German believers continued to worship privately in their homes, passed their faith on to their children, established house churches, and even sought to evangelize their neighbors. Thus when the opportunity presented itself to leave Russia for Germany, many left, for the Germans, in spite of their being Soviet citizens, were often decried as “fascists.”

Part 2 deals with the Russian-German people leaving the Soviet Union for Germany between the 1960s and 2000. While the author deals fairly equally with Catholics, Lutherans, Baptists, Mennonites and some other religious groups, in this review I am focusing more on the Baptists and Mennonites, who more than then any other group have formed their own congregations, separate from the native German churches. The Baptist-Mennonite Aussiedler (resettlers) in Germany numbered by the end of 2007 about 87,000 persons. This number does not include the native Germans in the resettler congregations, nor the approximately 9,000 resettler believers in German congregations. In 1998 there were 370 Aussiedler congregations, which rose to more than 500 congregations by 2007.

When the Baptists and Mennonites first arrived in Germany, the native Germans hoped they would join their congregations and help them to revive their own church life. This generally did not happen, whereas many Catholic and Protestant Umsiedler joined the German churches. The cultural and religious differences between some of the new groups and those of the native German people appeared to be too great. The newcomers did not feel comfortable with the religious and ethical practices of the German communities. The German churches with their openness to modern culture and liberal practices, such as dress, television, the theatre, and the use of alcohol, seemed too “worldly” to the more conservative newcomers. 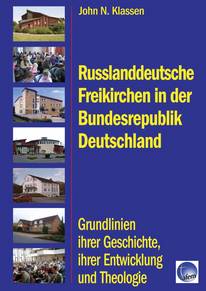 Part 4 consists of numerous graphs, maps, tables, statistics, a list of new congregations established after 1998, an extensive bibliography and a useful index. For serious historians and sociologists of immigrant groups this part is a goldmine of information.

In the rest of the review I can only refer to and comment briefly on some aspects of the life and faith of the Aussiedler, particularly the Mennonites and Baptists.

To understand the Aussiedler and their ways, the author explains, often by mere implication, that the newcomers began their life of faith in the former Soviet Union under considerable pressure, including severe persecution. In atheistic Russia it was illegal to worship freely and to pass their faith on to their children. To pass their religious faith on to their neighbors was forbidden and punished. The leaders were exiled to inhospitable places, hard labor camps, and given long prison terms. Mennonites and other groups were driven from their homes in the Ukraine and the Volga regions to northern areas, beyond the Ural Mountains and to Siberia.

The exiles had to learn to survive both physically and as faith communities. After the death of Stalin in 1953 the harsh rules were slightly relaxed. Around 1956 German-speaking believers began to search for their loved ones and then gather in different areas of the Soviet Union. As they were not allowed to return to their former homes, they organized congregational communities in former penal centers such as Karaganda in Kazakhstan. It is from these areas that most of the Aussiedler came to Germany.

Considering their background of suffering and their struggle to survive religiously, it is understandable that the Aussiedler congregations are different in their cultural and spiritual outlook from the native German citizens. In Russia they had to struggle, often to their death, to retain their faith and young people; now in Germany they again struggle against what they consider “the world” with its harmful influences. The native German Mennonite churches are considered too liberal and a threat to their faith and way of life. While they are open to integration and be good German citizens, the Aussiedler don’t wish to assimilated into the German religious and cultural environment.

The Aussiedler Mennonites consider themselves the heirs to the Anabaptist heritage. Like the early Anabaptists, they seek to live by the letter and spirit of the Bible in all things, including life style, separation from the world and politics, non-swearing of oaths, refusal to serve in the military, and a zeal for evangelism and missions. They seek to follow their spiritual forebears, the 16th-century “Swiss Brethren” and the 19th-century “Mennonite Brethren.”
What is the future for the Aussiedler? The newcomers are grateful to Germany for the opportunity to live in a land of freedom and plenty. But at least for the foreseeable future, according to the book, there is no indication that the majority will join the German churches. Klassen quotes Hans von Niessen, a leader among the newcomers, to the effect that the resettlers are suspicious of the Germans’ openness to ecumenism, feminism and worldliness. A believer who has come to Germany, according to Niessen, will hardly find anything in the old churches he would want to identify with (p. 354).

John Klassen is to be commended for treating the resettlers’ story both objectively and sympathetically. As this book is an academic study, it is not easy reading. However, whoever wishes to know the Aussiedler in Germany, can’t do any better than to study this important book. The book should be placed in all Mennonite and all church history institutions and libraries.

Bios of Loewen and Klassen

Harry Loewen as a child fled with his family from Stalins terror through Poland and 1943 Germany finally 1948 to Canada. With his degrees in reformation history and German studies he was professor of Mennonite Studies at the University of Winnipeg (Canada) 1978-1993. He is seen as one of the leading authorities on Mennonite history and churches worldwide.

John N. Klassen, born 1929 in Steinfeld, Russia, was a young refugee during World War II, when he became a Christian on a youth camp. 1948 he emigrated to Canada, married with Mary with three children. After being educated in carpentry, he studied theology at Fresno Mennonite Brethren Biblical Seminary and Fuller Theological Seminary, Pasadena. Since 1960 he has been pastor in Germany, since 1993 he teaches at Bibelseminar Bonn. 2002 he earned his PhD at the University of South Africa.

John N. Klassen, through his extensive research, introduced this new branch publically. Klassen’s research covers a wide range of topics. Beginning with German emigration to Russia in the 18th Century, he discusses the formation of German-speaking free churches in Russia and the brutal persecution in the time of communism through the re-immigration of the group from the 1960’s until now. The main emphasis of his dissertation is on an accurate representation of the newly founded churches in Germany as well as the church unions, mission organizations, and educational institutions. The author discusses in a meticulous and detailed manner the rapid growth of the Russian-German churches and provides insights regarding their faith and lifestyle. He also critically analyzes the challenges of the Russian-German evangelicals throughout their integration process in Germany.

Klassen’s work is a long awaited and indispensable contribution to the research of pietistic movements. Russian-German evangelicals can now reflect on their own history, whereas German evangelicals learn more about an unfamiliar world.

You can order this book online at

In Canada, the book can be purchased from the Mennonite Historical Society of BC, 211-2825 Clearbrook Rd., Abbotsford, BC V2T 683. 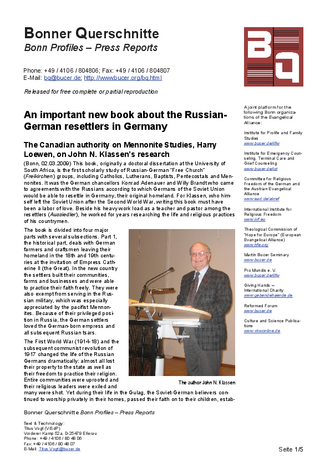