(Bonn, 24.01.2022) The International Institute for Religious Freedom (IIRF) published its audit statement of Open Doors International’s World Watch List (WWL) 2022, which was presented on January 19, 2022. Since 2014, a team of researchers and experts from the IIRF systematically review the data gathering, evaluation and scoring process that leads to the annual list of top 50 countries where it is most difficult for Christians to live due to various forms of discrimination and persecution. 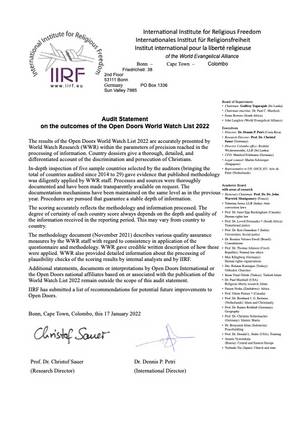 “The World Watch List of Open Doors and its underlying statistics are among the most quoted instruments for measuring the discrimination or persecution of Christians and violations of their religious freedom. I find it to be a very useful tool for understanding discrimination and persecution of Christians,” commented Prof. Dr. Christof Sauer, Research Director at the IIRF, and added: “As its statistics are sometimes misquoted or misunderstood, I emphasize that they must be interpreted correctly and used appropriately.”

In a discussion paper titled Alarm Bells Against Persecution, Sauer also highlighted the role of the WWL as a tool to raise awareness on the issue: “Among the few tools available describing the persecution situation of Christians across many countries, the World Watch List excels in being up to date, as it appears already 2.5 months after the completion of the time frame under examination. It has an exceptional proximity to the Christian grassroots in the countries most intensely affected, particularly among evangelical and Pentecostal churches. In addition, it demonstrates a special sensitivity for the fate of converts, who – as might be known – are intensely persecuted more frequently than most other Christians.”

Dr. Dennis Petri, International Director of the IIRF commented: “The main mission of the IIRF is to promote high quality research on religious freedom. One of the ways we do this is by annually auditing the World Watch List of Open Doors, which is the most authoritative source on persecution of Christians. Through the audit, we do not only provide academic validation for this publication, but we also give recommendations to improve the research process.”

The results of the Open Doors World Watch List 2022 are accurately presented by World Watch Research (WWR) within the parameters of precision reached in the processing of information. Country dossiers give a thorough, detailed, and differentiated account of the discrimination and persecution of Christians.

In-depth inspection of five sample countries selected by the auditors (bringing the total of countries audited since 2014 to 29) gave evidence that published methodology was diligently applied by WWR staff. Processes and sources were thoroughly documented and have been made transparently available on request. The documentation mechanisms have been maintained on the same level as in the previous year. Procedures are pursued that guarantee a stable depth of information.

The scoring accurately reflects the methodology and information processed. The degree of certainty of each country score always depends on the depth and quality of the information received in the reporting period. This may vary from country to country.

The methodology document (November 2021) describes various quality assurance measures by the WWR staff with regard to consistency in application of the questionnaire and methodology. WWR gave credible written description of how these were applied. WWR also provided detailed information about the processing of plausibility checks of the scoring results by internal analysts and by IIRF.

Additional statements, documents or interpretations by Open Doors International or the Open Doors national affiliates based on or associated with the publication of the World Watch List 2022 remain outside the scope of this audit statement.

IIRF has submitted a list of recommendations for potential future improvements to Open Doors.

Under the roof of the World Evangelical Alliance (WEA), the International Institute for Religious Freedom (IIRF) is a network of professors, researchers, academics, specialists and university institutions from all continents which work on reliable data on the violation of religious freedom worldwide and want to implement this topic to college and university programmes and curricula, especially in the areas of law, sociology, religious studies and theological programmes. The IIRF has branches in Europe, Africa, Asia and North America, with offices or partners in Brussels, Colombo, Delhi, Cape Town, Brasília, Tübingen and Vancouver. 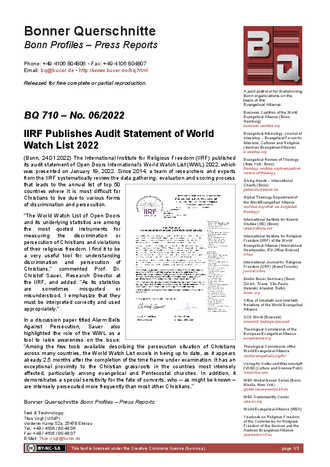