(Bonn, March 12, 2010) The Director of the International Institute for Religious Freedom and Chairman of the Theological Commission of the World Evangelical Alliance, Professor Thomas Schirrmacher, has met with the Grand Mufti of Istanbul, Mustafa Ça?r?c?, at the Grand Mufti’s offices at the Suleiman Mosque in Istanbul. The invitation dates back to a time when the two met each other in the summer of 2009. 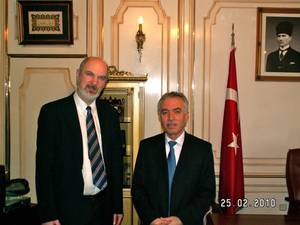 Ça?r?c?, who is also a professor of Islamic theology, is one of the drafters of a letter from 138 Islamic leaders to leaders of Christianity around the world. Schirrmacher formulated the response letter for the World Evangelical Alliance. In the discussion between the two gentlemen, Schirrmacher campaigned for Ecumenical Patriarch and all Christians in Turkey. Ça?r?c? assured Schirrmacher that he advocated a form of Islam that rejects coercion. He expressed hope that Turkey’s entry into the European Union would lead to more freedom of religion in Turkey.

On the day prior to the visit, Schirrmacher had conducted talks with Prof. Dr. Ingo Hofmann, the Commissioner for Foreign Affairs of the German Bahá’í community and its spokesman for questions dealing with human rights violations. On various occasions the International Institute for Religious Freedom has spoken out against the persecution of Bahá’í, especially in Iran.
Regarding the question as to whether his conversations with religious leaders is an indication that the World Evangelical Alliance is making a content-related rapprochement towards other religions, Schirrmacher pointed to the World Evangelical Alliance’s Resolution on Religious Freedom.  This states that the theological assessment of other religions and advocating peaceful coexistence are independent of each other. “Religious freedom and peaceful coexistence,” according to Schirrmacher’s own words, “are precisely not based on the idea of unity with regards to content. Otherwise, there never would have been intra-Christian religious freedom in Europe.” Apart from that, he advocates a situation where specifically those people with differing views need to be in personal dialog. Personal trust helps to bring about peace and resolve difficult situations, and it is an important precondition for serious discussions about one’s own faith. 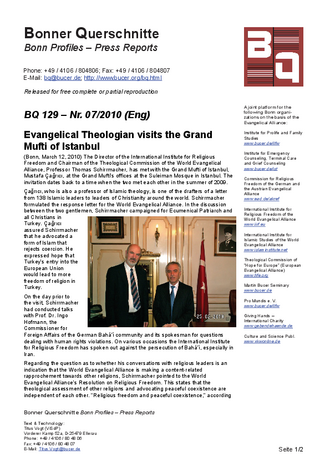