The Chairman of the Theological Commission of the World Evangelical Alliance, Professor Thomas Schirrmacher, meets with the head of the Orthodox Church

(Bonn, March 12, 2010) The newly elected Chairman of the Theological Commission of the World Evangelical Alliance, Professor Thomas Schirrmacher, has made his first official inaugural visit, which led him to the Ecumenical Patriarch of Constantinople, Bartholomew I, in the form of a courtesy call. The one-hour audience in the Patriarch’s study was followed by lunch together. 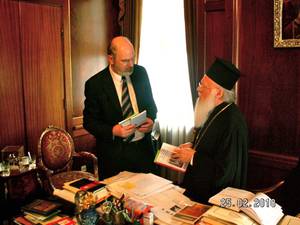 Schirrmacher assured the Patriarch, in what is in the meantime his third meeting, of the global Evangelical community’s solidarity in light of unjust restrictions placed by the Turkish state. He informed the Patriarch of various initiatives undertaken for his benefit and for the benefit of the long-established churches in the Islamic world, as well as political successes in Germany and the European Union. Indeed in the most recent European Union progress report, as far as the entry of Turkey into the European Union is concerned, there are detailed requests to give back to the Patriarch his freedom of movement and to return property and buildings that have been confiscated. The Federal Government of Germany’s new coalition agreement expressly refers to the protection of Christian minorities.

The Patriarch showed himself to be visibly pleased about the substantial support received from Germany by Christians as well as by politicians. The Chancellor of Germany as well as recently the Foreign Minister Guido Westerwelle have both visited the Patriarch.

During the discussion, questions of theological training were addressed, relating in particular to the type of help Evangelicals could give so that the Greek Orthodox seminary on Heybeliada/Halki (Istanbul), which has been closed since 1971, could be reopened. The Turkish branch of the Martin Bucer Seminary in Istanbul instructs students of various confessions. It participated in the conversation via the presence of its President, Pastor Behnan Konutgan, and the Chairman of the Martin Bucer Seminary (Germany), Klaus Schirrmacher (Pforzheim).

A further participant in the discussion was Dr. Nick Nedelchev of Bulgaria, who is the long-time President of the European Evangelical Alliance and is adviser to the Chair of the Theological Commission on oriental churches.

The Ecumenical Patriarch of Constantinople is the head of the Orthodox Churches, who together have approximately 300 million followers worldwide. He holds the preeminent position over all other orthodox Patriarchs. However, he is strongly restricted in his activities by the Turkish government, which only views him as the head of the approximate 3,000 Greek Orthodox Christians in Istanbul.

In addition to the Patriarch, Schirrmacher visited the Metropolitan of the Syrian Orthodox Church, Yusuf Cetin, and Istanbul’s Islamic Grand Mufti, Mustafa Çagrici. The Metropolitan expressed his thanks to Schirrmacher for his efforts on behalf of Syrian Orthodox Christians, who have been driven out of Iraq and have found new homes in Germany or elsewhere in the European Union. Schirrmacher assured the Metropolitan that the World Evangelical Alliance is closely following the difficult situation facing various oriental churches in the Islamic world. The doubtless theological differences at hand should not be allowed to be a reason for denouncing the persecution of Christians. The Alliance has been involved in the cause of the long-standing church in Turkey for over 150 years, and lodged complaints with the Sultan on their behalf as early as in the middle of the 19th century. 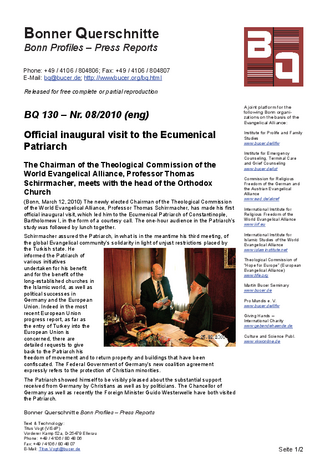