The Crisis of Religious Freedom

(Bonn/Cape Town, 30.03.2012) “Religion and Civil Society” is the theme of the latest issue of the International Journal for Religious Freedom, put online free of charge on 1 March. While “civil society” is an old concept in political philosophy, it became newly relevant following the collapse of communism in Central and Eastern Europe. It emphasizes the freedom of autonomous social groups and institutions below the state and not controlled by it. 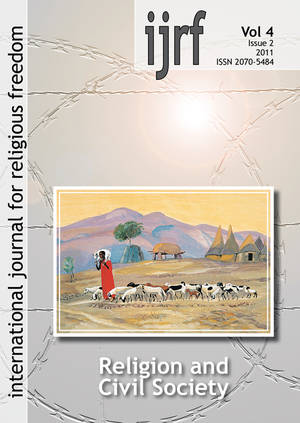 This issue of the IJRF includes philosophical essays by Professors Silvio Ferrari and Rik Torfs, who raise fundamental questions about religion and freedom. Torfs discusses the crisis of religious freedom, including the progressive debasement of the idea when less rigorous approaches lead to the loss of other freedoms. Ferrari explores the tension between religious truth and religious freedomand the implications for a robust civil society.

Other authors focus on specific regional concerns. Bony Guiblehon uses the recent change of government in the Ivory Coast to understand the larger relationship between religion and politics, and he challenges the standard media view of former president Laurent Gbagbo’s connection with Evangelicals. Mxolisi Michael Sokupa explores the experience of the Seventh Day Adventist Church in South Africa and elsewhere. Roy Stults provides an overview of the theology of persecution developed by Paul Lee based on his experience with the Korean Church.

We also examine some social issues and challenges they pose to religious freedom, particularly in the West. Nicholas Kerton-Johnson looks at the marginalization of Christians in the United Kingdom. Mike Donnelly provides a seminal look at the implications for religious freedom and parental rights of restrictions on homeschooling. He contrasts the long and successful campaign to exercise this freedom in the United States with recent experience of restrictions in Germany, Sweden, and elsewhere.

Drawing upon Kerton-Johnson, Donnelly, and others, Stephen Baskerville singles out the newly vocal sexual agenda as a source of hostility to religious belief and its free exercise, emphasizing the expanding scope of government social and family policy. In the opinion piece IIRF Senior Research Writer Fernando Perez conveys some words of caution about an overoptimistic view of the “Arab Spring.” The ascendancy of Islamists to power raises questions about their commitment to freedom for Christians and other minorities who fear the prospect of heightened persecution. Daniel Röthlisberger reports on research on self-help by the persecuted and help for them in the light of New Testament teaching.

As of January 2012, IJRF has been included by the South African Department of Higher Education and Training into the “Approved list of South African journals”. 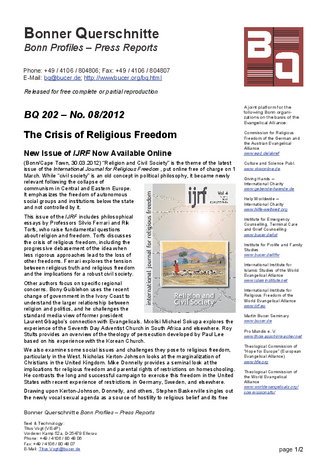