Seminar for Mennonite Brethren in Bielefeld: Amidst enormous Problems the Church is growing around the World

(Bonn, 03.04.2017) According to the Evangelical theologian and sociologist Thomas Schirrmacher, Associated Secretary General of World Evangelical Alliance, issues facing Christianity around the world have increased and include more and more countries and various circumstances. At the same time, Jesus’ church is growing to an extent never before known, and in some regions such as Iran or China it is seemingly growing almost on its own.

Since the Christian faith rejects spreading the faith through coercion, force, or through the state, according to Schirrmacher, the Jesus’ church is having to endure increasing expressions of enmity against it politically or through the use of force and human rights infringements. It is often the case, however, that at the same time the hearts of people are won who often shed the violence within their own religion or worldview and open up to the message of the love of Jesus. “That is a soundly New Testament thing and a mandate, yes even a command of Jesus, to bless persecutors and to pray for them,” to quote Schirrmacher. “Father, forgive them, for they do not know what they are doing,” Jesus prayed upon his crucifixion and Stephen prior to his being stoned.

The full-day seminar, entitled “The Global Spread of Christianity,” was broken down into four blocks and was attended by 300 participants. The lead pastor of the congregation, Heinrich Klassen, appeared to be very satisfied. He maintains that it is important for the church and for Christians generally to see beyond local problems and grasp the big picture and consider the whole world.

The Mennonite Brethren congregation in Bielefeld was founded in 1974 by Russian-German Christians and is today divided among three locations. It has more than 1,000 members and is counted among the Federation of Anabaptist Churches (Bund Taufgesinnter Gemeinden, or BTG), an association of 27 churches throughout Germany.

Schirrmacher preached on Romans 12:1-2 at the church’s worship service on Sunday. Paul saw the “renewing of your mind” as a means against conforming to the pattern of this world, according to Schirrmacher. According to this, evil and unjust principles are not to be found somewhere outside of the Christian or the church but are rather in the minds of Christians. Only a Christian who likes to think can expose and overcome cherished but wrong principles of thought by means of the Bible. 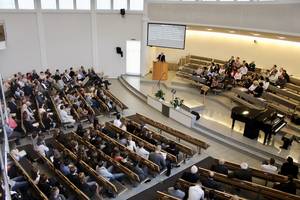 In response to the question of what he would counsel Russian-German Christians to do with respect to their relationship to the German majority culture, Schirrmacher recommended combining successful integration with a self-conscious maintenance of one’s own ecclesiastical tradition. People are neither happy when they completely give up their special features in favor of the majority culture nor when they are in an unending battle with their surroundings. Thus, Schirrmacher maintains that it would be a sad thing if Russian-German music culture were to disappear. At the same time, in a multicultural society, such as one has in Germany, it is important to reach out to other cultures in the exemplary way Schirrmacher believes the church in Bielefeld has done with people from Iran.

Schirrmacher remembered the Anabaptist movement for the principle of religious freedom it brought forth, which even applies for one’s own children. In his comments, Schirrmacher held that adult baptism is an external sign for the view that God also does not force children from believing families into the church. As a result, Russian-German Anabaptist congregations have to demonstrate this sort of Anabaptist movement DNA in dealing with their children, who have to cope with problems typical for those belonging to the second or third generation after immigration.

Subsequently, the Directors of Studies at the Martin Bucer Seminary Study Center in Bielefeld, Dr. Bodo und Dr. Rita Heller, moderated a discussion between the Bielefeld students and the speaker. 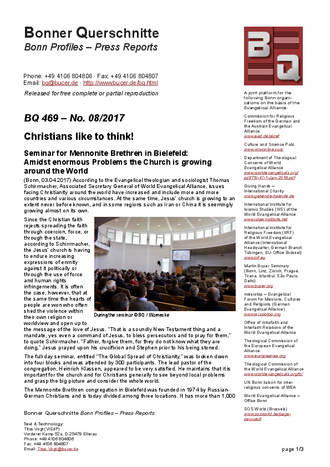 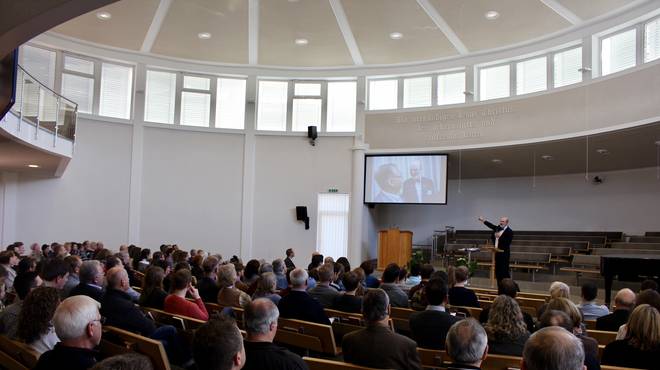 During the seminar © BQ / Warnecke 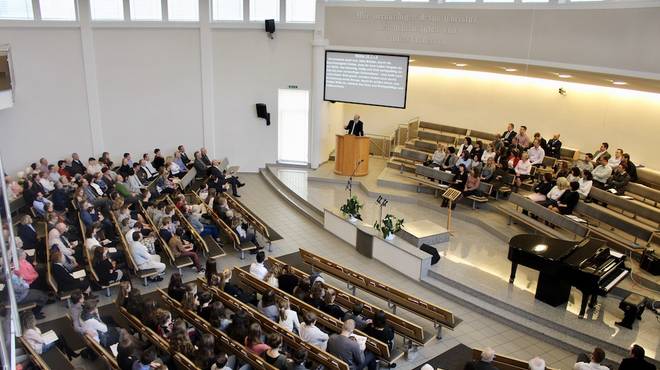 During the sermon © BQ / Warnecke

During the sermon © BQ / Warnecke 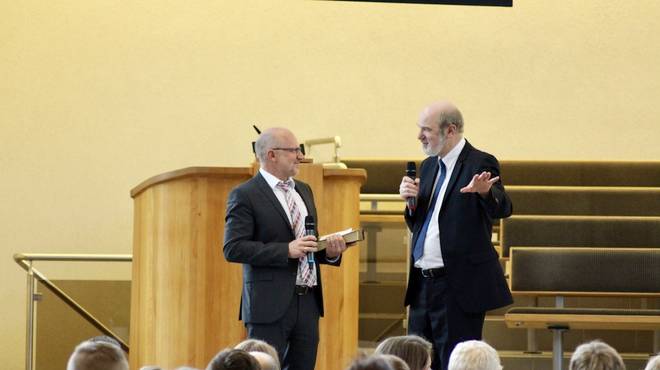