Bishop Dr Thomas Schirrmacher, Secretary General of the WEA, says, “The WEA is very concerned about potential escalation in conflict between Russia and Ukraine. We join with our brothers and sisters in both countries in calling our global community to pray for peace and reconciliation in the region.”

“There have been tensions on the border between the two countries since 2014 but there is a significant risk that any war could draw in other nations and continents. We are therefore not only praying for an immediate de-escalation but also for lasting peace and a restoration of respectful relationships between Russia and Ukraine as well as the wider region and beyond,” Schirrmacher commented.

Evangelicals in both nations are praying and fasting for an end to the years-long conflict that has cost thousands of lives and instilled an atmosphere of anxiety and stress among the wider population. They are concerned about the increasingly tense rhetoric but remain hopeful that a deterioration of the situation can be avoided. In an expression of unity that transcends nationalities and politics, Russian and Ukrainian believers also regularly pray for each other.

Commenting on the continuing situation, Thomas Bucher, General Secretary of the EEA, said that “both Russia and Ukraine are sovereign nations, having the right to live without fear of attack but also having a duty to live peaceably as neighbors. Given the political and military developments over the past several years, each side may perceive the other as a threat but there is absolutely no justification for the Russian government to continue its interference in Eastern Ukraine or even start an invasion.”

Bucher points out that the real hope now lies in those who will raise their voices to build peace. “We need to pray for peacemakers and truth champions to speak up loudly in both Russia, Ukraine and the autonomous territories,” he says. 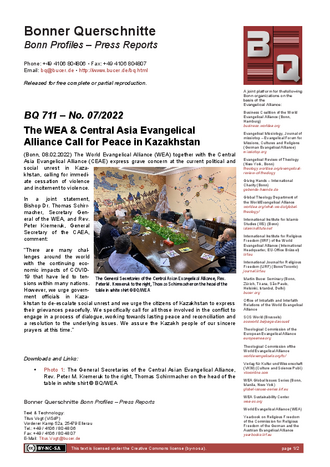