By Michelle A. Vu

(Bonn, 15.04.2009) The U.N. Human Rights Council adopted a “defamation of religions” resolution on Thursday, ignoring a mass petition signed by over 180 non-government organizations from more than 50 different countries.

“Human rights protect people, not ideas,” responded L. Bennett Graham, Becket Fund representative to the U.N., in a statement after the resolution was passed. “The passage of this resolution by the Human Rights Council is a disaster for people of all faiths.”

Becket Fund for Religious Liberty co-drafted the petition that requested the Council to reject the resolution.

Critics of the defamation of religions resolution warn that it could be used to legitimize anti-blasphemy laws and intimidate human rights activists and religious dissenters. Instead of protecting adherents of religions, including those of religious minorities, the resolution protects religions themselves, they say.

“Unfortunately these resolutions seek to undermine the very principles we were celebrating just last December with the 60th anniversary of the adoption of the Universal Declaration of Human Rights,” said U.K.-based Christian Solidarity Worldwide advocacy director Alexa Papadouris. “They attack freedom of expression and freedom of religion and seek to protect powerful governments at the expense of often powerless individuals.”

CSW was among the 186 NGOs that called on governments to reject the Pakistan-tabled resolution.

But international outcry against the resolution resulted in sustained lobbying at the United Nations. Since 2005, the resolution has been passed annually at the U.N. General Assembly.

However in 2008, for the first time, “no” and “abstention” votes combined outweighed “yes” votes on the “defamation of religions” resolution.

The U.N. Human Rights Council adopted the resolution by a vote of 23 yes, 11 no, and 13 abstentions. NGOs have noted that this is the second year in a row that “no” and “abstention” votes combined have outweighed “yes” votes on the resolution.

Becket Fund’s Graham, who is in Geneva, emphasized, “We are no longer talking about rights at the Human Rights Council, we are talking about politics. It’s a disgrace.”

He added, “We already have the tools we need to address religious conflicts in international law, including existing provisions against incitement to hatred and violence. We need to use them better.”

CSW’s Papadouris urges governments to reject defamation of religion in “whatever form it should take” at next month’s U.N. Durban Review Conference in Geneva. 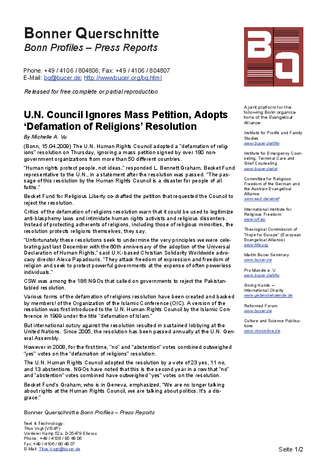