(Larnaca, Cyprus/ Bonn, Germany, 3 April 2010) Key organizations that work on religious liberty issues around the world made strong statements on the killings and violence in Nigeria and launched a global campaign calling for prayer for that nation. In what is being called “The Cyprus Statement,” the Religious Liberty Partnership (RLP), with member organizations based in 18 countries, is calling the worldwide Christian community to pray for the crisis in Nigeria.

The Cyprus Statement acknowledges some positive elements within Nigeria, including the role that the church is playing, but expresses deep concern about the ways in which the situation is being handled by the government. In addition, the Statement calls on the worldwide church to pray for work toward the religious rights of all Nigerians, to provide practical humanitarian support, and to support reconciliation efforts.

“Following the recent appalling massacres of Christian men, women and children in villages around Jos, Nigeria it was timely that this years RLP Conference in Cyprus had a focus on Nigeria,” stated Dr Thomas Schirrmacher, Director of the International Institute for Religious Freedom, based in Bonn, Germany. “The Cyprus Statement calls amongst other things for the perpetrators of violence to be brought to justice. If these people continue to kill with impunity, the violence will escalate even further, and will eventually endanger the entire nation.”

“Together as the RLP, we stand in support of Christians in Nigeria, calling upon the Church worldwide to pray for a restoration of lasting peace in Nigeria,” said Dr Christof Sauer, Co-Director of IIRF, based in Cape Town, South Africa. “Christians in central and northern Nigeria today face unprecedented persecution, with women and children suffering barbaric acts of violence. In this context the Nigerian Church leadership are actively choosing to isolate those perpetrators of these recent killings by not retaliating, and relying on God to sustain them in their grief.”

Together with the German Professor for political geography, Dr Rainer Rothfuss, Tübingen, who was a guest at the consultation, the IIRF directors agree: “The statement of the RLP is characterized by the fact that the most influential Christian human rights organizations are speaking with one voice, and that they have listened to the advice of local Christian leaders beforehand. The highly complex situation in Nigeria is assessed with much differentiation and positive aspects are acknowledged. At the same time very specific intervention is clearly called for”.

The International Institute for Religious Freedom focuses on scholarly research on religious freedom, religious persecution and the situation of oppressed Christians. It is an institute of the World Evangelical Alliance. 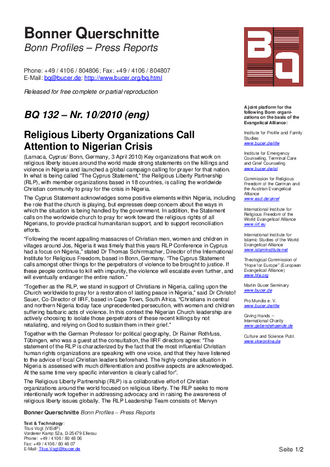