(Bonn, 13.08.2021) The World Evangelical Alliance (WEA) and the European Freedom Network (EFN) are pleased to announce the launch of a new global network to fight human trafficking. An estimated 43 million people worldwide are caught up in this modern form of slavery, in which women, men and children are exploited, bought and sold for economic gain. The newly formed World Freedom Network (WFN) will bring together a variety of organizations and experts with a specific focus on how churches can get involved and play a unique role in addressing this issue in their own local contexts. Leanne Rhodes who has served as Executive Director of the EFN has been appointed as the new networkâs Global Director. 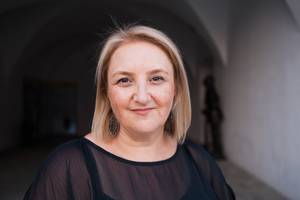 âHuman trafficking is a global organized crime and needs a global response to combat it. I am excited to see the World Freedom Network become an integral part of the solution through equipping and connecting Christian professionals working in this space as well as engaging churches across the globe to act locally and nationally. We can achieve so much more when we all work together. Weâve seen the strength that comes from this approach in Europe and we, at EFN, are so excited to now support other regions to do the same,â Rhodes said upon her appointment.

Human trafficking is a complex problem that outworks differently across the world. In some regions the main focus is trafficking for labor while in others it is trafficking for sexual exploitation. Other countries contribute more to the problem through consumer purchases. In the European context, EFN, which is part of the European Evangelical Alliance, has run a high-profile campaign called âDonât Shut Your Eyesâ that highlights how pornography fuels human trafficking, educates churches and the public on how to identify signs of trafficking and also helps people become free from addition.

The WFNâs aim is to build autonomous regional networks that engage with the problem in their context whilst also joining together with other regions to represent the global Christian response to human trafficking. In many places, the WFN will be able to build upon the existing structures and efforts among WEAâs constituency of regional and national Evangelical Alliances that bring together churches and ministries in 143 countries.

âAs followers of Jesus, it is our mandate to engage in anti-trafficking efforts. With over 600 million evangelicals spread over every region of the world, I am excited about the good that can be achieved to turn this crime against humanity around,â said Rhodes.

A native Australian living in Portugal, Rhodes has led the EFNâs network of 270 Christian organizations from 42 countries for several years and also founded Abolishion, a multi-national effort to break the systems that keep people in slavery. Her previous work in community development has taken her to a number of countries in Asia and Africa. Holding an IT degree and a graduate diploma of Theology, Rhodes is currently completing a Master of Arts at Alpha Crucis College with her thesis research on the question: âWhat is the modus operandi that traffickers use to recruit people online for the purpose of sexual exploitation?â 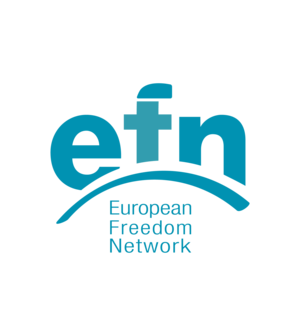 Commenting on the long history of evangelical engagement in the fight against human trafficking, Bishop Dr. Thomas Schirrmacher, Secretary General of the WEA, pointed out that when the term âevangelicalâ emerged for the first time in the 19th century, it referred to those Christians in the United Kingdom who were fighting slavery. The WEA inherited this legacy when it was founded in London in 1846, some thirteen years after slavery was officially abolished in Britain.

âWhen I researched for my book on human trafficking, I was amazed to discover how similar our present vision is to the vision these Christians had more 175 years ago,â Schirrmacher said, and added: âThe famous hymn from that time âAmazing Graceâ is almost like a national anthem of evangelicals. It includes a very personal view of salvation by grace but also speaks to the global political picture, having been written by a slave-trader who became a believer in Jesus Christ and struggled to grasp that God in His grace gave him a second chance and an opportunity to now work on behalf his former victims as a leading abolitionist.â

The WEA has been responding to the issue for a number of years through its Human Trafficking Task Force and its work at the United Nations. The new network seeks to widen the scope and bring together the many facets and components of what is being done at the global, regional and country levels and ultimately at the grassroots in the neighborhoods.

âEvangelicals have been engaged in a vast number of local, national and transnational organizations against racism, slavery and human trafficking. They advocate for stronger laws, better protection and also run safe houses for those exiting from forced prostitution around the globe,â Schirrmacher said, and expressed: âI am very pleased that all these aspects can now be visibly brought together and networked, so that we strengthen our global advocacy on this issue and can better assist national Alliances to address their governments and fellow citizens with one voice.â

âWhile we know that the fight against human trafficking is not a sprint but a marathon, as evangelicals we will continue to be at the forefront of advocating for those who have fallen victim to the evil of modern slavery and stand up for their freedom and restoration,â he concluded. 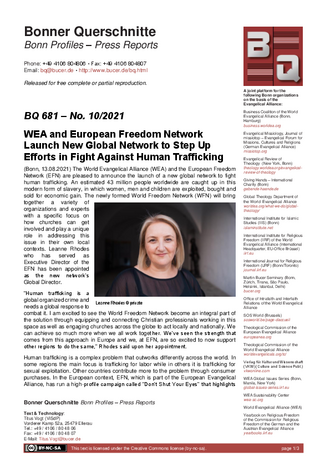