(Bonn April 24, 2009) The ethicist Thomas Schirrmacher, resident in Bonn, has called upon ethicists and social ethicists to heighten their support of efforts made by the German Army with respect to ethical training. A good tradition of the Federal Republic of Germany is that the parliamentary army is in constant dialog with the civil society, and one in which Christian as well as non-Christian ethicists belong.

Schirrmacher spoke in the framework of a “Security Policy Think Tank Roundtable” on the “Implementation of ethical Training and Advanced Education,” which took place in the German Army Academy for Information and Communication in Strausberg in the state of Brandenburg. 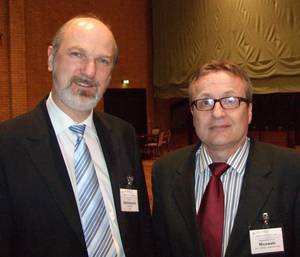 Schirrmacher accused many of his colleagues of occupying themselves too little with ethical questions within the army and for an army in action. It is naturally correct to occupy oneself generally with ethics in peacetime. However, it is in the everyday activities of the Germany army in its foreign deployments that it is decided how much our democracy differentiates itself from countries which simply utilize the military to accomplish its political goals.

A democratic parliamentary army begins with one of the largest ethical dilemmas that there is, one with which many do not want to get their hands dirty. This applies equally to theologians as well as to politicians. The protection of life and the prohibition against killing is one of the highest values that is known in our constitution and which (almost) all citizens share instinctively. Since there are, however, people on earth – countries as well as armies for civil war and terrorists who are ready to kill or already do kill, someone has to be prepared to potentially risk his or her life or if necessary to even end the life of the attacker. Without this dilemma we would not need an army, and an army would only be employed at that point where a threat to life is real – otherwise, for instance, the Red Cross would be sufficient in Afghanistan.

The monopoly on force which is in the hands of the state, according to Schirrmacher, only allows the state to rightfully maintain an army. There have admittedly been many war mongering armies in history which were contemptuous of human life. A rightfully maintained army can only be differentiated from a war mongering army if political and internal military orientation and structures ensure human rights protection and the goal of freedom.

According to Schirrmacher’s opinion, ethicists – Christians as well as others – may not be allowed to leave the German army out in the cold, and neither may politicians, who disguise highly dangerous operations as peace missions or humanitarian operations and do so in order to present before the public the appearance of not being a participant in a war.

In theory the German Army, with its concept of ‘internal leadership,’ has again confirmed through its Central Service Regulations 10/01 that globally it has the best prerequisites. Now it is left for these ambitious goals to be thought through, communicated, and put into practice.

As a representative of the military, Dr. Edwin Micewski of the Austrian Federal Army also spoke in addition to Schirrmacher at the Security Policy Think Tank Roundtable. Micewski teaches ethics at the Austrian Military Academy as well as at universities in the USA. Although in contrast to Schirrmacher he does not refer back to Christian ethics, but rather a deontology reminiscent of the Kantian tradition, he came to the same result relative to the initial dilemma that an army faces. He also calls for not putting a positive spin on this problem, but rather to pay particular attention to offering support to soldiers and officers in overcoming these problems. 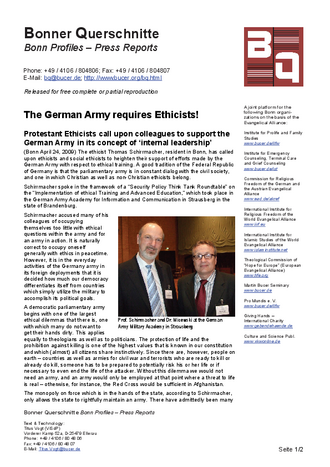