Yakubu Joseph, research coordinator of the International Institute for Religious Freedom (IIRF), participated in a panel meeting organized by Jubilee Campaign USA at the 19th Session of the Human Rights Council in Geneva on 7 March 2012. Other members of the panel included Jubilee Campaign Executive Director, Ann Buwalda; Mr. Edward Pwajok, the Attorney General and Commissioner of Justice of Plateau State, Nigeria; Mr. Emmanuel Ogebe, who directs the US Nigeria Law Group; and Mr. Gregory Treat, Jubilee Campaign researcher. The main objective of the event was to draw attention of the international community to the reality of anti-Christian violence in Nigeria.

Joseph argued that the present spate of sectarian violence led by the islamist sect Boko Haram is an overlay on what has been endemic religious intolerance in Nigerian multi-ethnic and multi-religious society. Religious minorities are often vulnerable and marginalized, and subjected to structural and systemic injustice. This hardly gets the attention of the media. Besides these hostile treatments, which have become part of the daily lives of religious minorities, the toll that the recent sectarian violence takes on the lives of Nigerians is quite alarming. While this has caught the attention of the international community and the media because of the scale of the destructions, the debilitating impacts on the victims are long lasting, and in some cases permanent, without state and non-state actors concerned providing long-term rehabilitative supports to the victims.

Presenting the plight of indigenous Yobe Christians as a case study, Joseph showed how the increasing attacks against Christians in northern Nigeria have resulted in a humanitarian crisis with far-reaching human security challenges. Since 4 November 2011 when deadly attacks were launched by the Boko Haram sect in major cities in the north-eastern state of Yobe, Christians have become increasingly vulnerable in that part of the country. This resulted in the internal displacement of many people, some in the state while others to different states in the country. The trauma, disruption of family lives and livelihoods, and the uncertain future that many of them see add to the grief of losing loved loss.

Finally, Joseph reminded the group that although many of the displaced persons are not in camp setting due to the practice of Christian solidarity in suffering, they are still in great need of support and protection against further violations. To underscore this point, Joseph cited that the UN Special Rapparteur on the Human Rights of Internally Displaced Persons, Mr. Chaloka Beyani, has dedicated his thematic report to the 19th Session of the Human Rights Council this year to internally displaced persons ( IDPs) living outside camp setting who constitute the majority of IDPs in the world. Joseph’s presentation ended with a call to the international community to support Nigeria to overcome the present security challenges bedeviling the country, and called on leaders of all religions to commit to building bridges of understanding and accommodation among the members of their faiths.

The United Nations Human Rights Council heard the truth on the killing of Christians in Nigeria. The hidden causes and terrifying implications of the militant, Islamic-driven violence were laid open for the perusal of the international community. Ann Buwalda pled with international community to recognize the pernicious effects of impunity, using the massive escalation in violence. “Freedom of religion or belief does not merely mean that governments do not detain or execute people on account of their belief, but that the governments ensure that religiously motivated murder is not permitted and that incitement draws its proper prosecutorial response,” she proclaimed.

Jubilee Campaign showed a new clip from Fred Williams entitled “The Price of Impunity.” The wails of the bereaved women of Dogo Nahawa, where almost 500 people were massacred two years ago today, provided a chilling soundtrack to image upon image of butchered children and decapitated pastors, with imagery as recent as December 10, 2011.

The testimony of Mr. Yakubu Joseph provided a brilliant analysis of the situation of northern Christians. With his expertise as a researcher at the Institute for International Religious Freedom, Mr Joseph expertly dissected the current anti-Christian climate in its religious, social, and political dimensions and noted the difference between legal and actual protection. Despite the ratification of numerous international human rights treaties and Constitutional language promising religious freedom, the reality faced by Nigeria’s northern Christians is anything but free.

Barrister Edward Pwajok, the Attorney General of Plateau State presented his case for empowering the States to arrest and investigate the crimes they are theoretically responsible for prosecuting under Nigeria’s current system. All existing security forces fall directly under Presidential authority. Unfortunately, the corrupt and often partisan nature of the centralized security forces sabotages sub-national justice procedures undermining the freedoms enshrined in Nigeria’s Constitution.

Jubilee Campaign researcher Gregory Treat presented the report “Recognizing the Religious Underpinning of Violence In Northern Nigeria” based on Jubilee Campaign’s recent situation assessment trip to Nigeria in the first half of February. Unfortunately, far too much of the international community spends its time denying the reality of the religious element in Nigeria’s northern conflict choosing instead to arbitrarily focus on “cross cultural frustration over government corruption” as the U.S. Department of State did in a recent Washington Times article. By contrast Mr. Treat asserted that: “Until the international community recognizes the religious element in this conflict they will continue to be blindsided by massive escalations in violence like what we are seeing now.”

The violence has continued unabated since January and shows no signs of ending. An ultimatum issued by a Boko Haram spokesman in early January ordered all Christians to leave the north or face attacks. Over 300 people died in the month of January alone as Boko Haram attempted to fulfill their promise, a 7-fold increase in killings over all of last year. This past Sunday March 4, Boko Haram declared “war on Christians.” Boko Haram has never broken their word when they promise to deliver violence despite the opinions of outside observers who continue to cast doubts on Boko Haram’s organization and capacity.

Jubilee Campaign called on the Special Rapportuer on Freedom of Religion or Belief to request an invitation for a country visit to Nigeria and urged the Government of Nigeria to grant that request and respond to the many communications they have ignored on this issue over the past several years. We are encouraged by the dedication of the Special Rapportuer as he continues to hold Nigeria accountable, but more engagement from both the UN and the international community at large is necessary to prevent this situation from spiraling out of control. The failure to prosecute greatly expands the number of societal actors willing to commit violence in the name of Islam and until that issue is dealt with the violence will continue. Jubilee Campaign pleads with the international community to recognize and respond to this crisis before it grows to genocidal proportions. 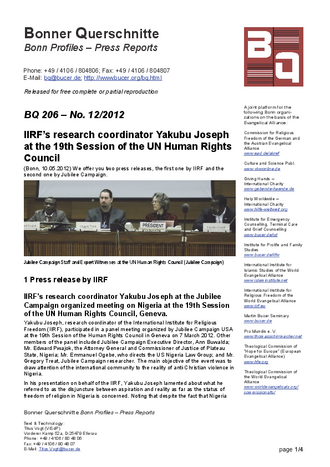