First time ever documented: Facts and Figures about the Recent and Growing Phenomenon of Intolerance and Discrimination against Christians in Europe

Five-Year Report to be released on Friday, December 10th, 2010

(Bonn, 04.06.2011) At the occasion of the OSCE/ODIHR Human Dimension Implementation Meeting on Freedom of Religion (Vienna, Dec 9 – 10), as well as for the International Day of Human Rights (Dec 10), the Observatory on Intolerance and Discrimination against Christians in Europe released a five-year report. For your convenience, please find the embargoed report attached.

The report – available in print and for download – contains a detailed description of the European phenomenon and surprising quotes from intellectuals and international human rights documents. It provides lists of exemplary cases in different categories of intolerance and discrimination.

The Observatory’s director, Dr. Gudrun Kugler, says, “Intolerance and Discrimination against Christians includes the denial of rights of Christians, such as in the area of freedom of expression and freedom of conscience. Religious freedom is endangered especially with regard to its public and its institutional dimension. We also receive many reports on the removal of Christian symbols, misrepresentation and negative stereotyping of Christians in the media, and social disadvantages for Christians, such as being ridiculed or overlooked for promotion in the work place.”

Mr. Mario Mauro, Member of the European Parliament and OSCE representative on freedom of religion said on the new report, “The examples shown … prove that the discrimination against Christians occurs not only in countries where Christians are a minority, but that cases of intolerance and discrimination against Christian are present both East and West of Vienna, without counting the violent persecutions which affect Christian communities outside the OSCE area… There are several types of discriminations … intentional, when discrimination is motivated by an effective dislike of Christians, and unintentional, that is when some apparently neutral government rules result in unequal treatment for Christians.”

Mr. Mauro concluded by recalling the importance of ensuring freedom of religion, as well as guaranteeing the right to conscientious objection and also ensuring a full participation in public life by modifying legislation that provokes intolerance against Christians.

The Observatory hosts a website which monitors and catalogues instances in which Christians and Christianity are marginalized or discriminated against throughout Europe. The Observatory gathers instances of discrimination against Christians from media sources and individuals who report to us. We brief international governmental organizations, such as the EU Fundamental Rights Agency (FRA) and the Organization for Security and Co-operation in Europe (OSCE). Our findings are available to politicians, NGOs, journalists and interested individuals through our website. An elaborate search tool on our website provides a useful service. 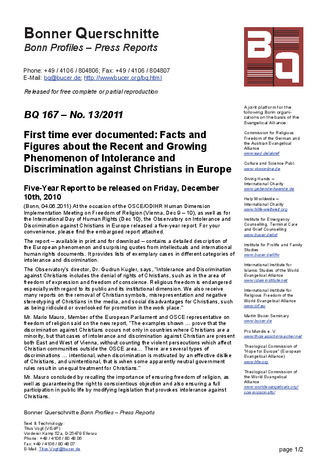