Chancellor Merkel: “Give a voice to the victims of persecution!”

(Bonn, 06.18.2010) It is time for Germans to get involved on behalf of persecuted Christians. Chancellor Angela Merkel made this declaration Friday before the Protestant working group (Evangelischer Arbeitskreis, EAK) of the CDU/CSU political party. CDU general secretary Hermann Gröhe was one of the prominent political leaders among the 450 guests at the national conference on “Persecution and Discrimination against Christians in the 21st Century.”

“We have no right not to protect of the dignity of others, simply because our own dignity is secure,” noted Merkel Friday in Berlin. The issue of religious freedom should gain attention beyond the circles of the EAK, including in the goals of the CDU-Liberal Democrat coalition government. “Anyone who denies human rights does not have the benefit of all in mind,” the chancellor said, referring to German history: Even during times of the GDR dictatorship it was “of the very highest importance” that Germans were actively engaged on behalf of those persecuted by the regime. “Because we have the good fortune of German unity, we must now become aware of and give a voice to the persecuted.”

Christians: “An unwanted voice for democracy” 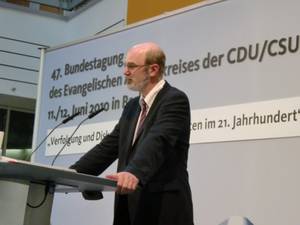 In addition to Merkel and Gröhe, prelate Bernhard Felmberg (international bishop representing the Evangelical Church in Germany-EKD), Bishop Martin Schindehütte (of the Lutheran World Federation), and sociologist of religion Thomas Schirrmacher participated in the event at the CDU party headquarters. In his presentation Schirrmacher explained why Christians are the most persecuted minority in the world. They are not only the largest world religion, and thus, because of raw numbers, most afflicted by oppression, they are also a rapidly growing group, especially in countries without religious freedom, such as China. Many former Western colonies had formed resistance against Christianity, because it was associated with oppression. In other countries Christians are suffering in a context of nationalist movements, so it seems almost natural that an Indian has to be a Hindu and a Turk a Muslim. Christians have become an “unwanted voice for human rights and democracy” against repressive rulers. “Ninety percent of the democracies in the world have Christian roots. And something else allows dictators and violent groups to act against Christianity: they know that Christians do not shoot back.”

Two-thirds of humanity lives without religious freedom, he explained. In countries such as Turkey the expulsion of Christians continues “without parallel.” “The only ones who do not leave are those who simply cannot leave,” said Schirrmacher. In Pakistan the situation is even more dramatic. Converts away from Islam live in great danger: “The only question is who, in the end, will kill them, a mob or the government?” In spite of the difficult situation, Schirrmacher voiced a trace of optimism: Never had the interest in the topic been so great as today. The problem is not only being reported in the international media, but it has also arrived on the political agenda. The EAK is also contributing to this goal. It has offered a public resolution on the persecution of Christians. The Christian Democratic Party is concerned about religious freedom in Turkey and Iraq.

Turkish Baptist pastor Ertan Cevik gave insight into the lives of Turkish Christians in a discussion with Martin Schindehütte and Hermann Gröhe. His church has 32 members and is the first of its kind in Turkey. For Cevik threats because of his faith are commonplace. Time and again, his congregation in Izmir is the target of Islamist attacks. He receives police protection. His name appears on the death list of an Islamist organization. Cevik is a child of Turkish guest workers in Germany. After his theological training, he chose deliberately to return to Turkey “to restore the gospel there.” Christian activities and meetings are often perceived by the Turkish population as “dangerous and illegal.” Christians have a hard situation: in school textbooks, as in the media, they are consistently portrayed in a bad light. “It will not be sufficient merely to reform the laws; the thinking has to change as well,” Cevik claims.

Schindehütte pleaded for tolerance between religions and expressed confidence that “violent potentialities can be turned into something positive.” Antagonism toward Christians is not an essential characteristic of Islam. Rather it is an intolerant fundamentalism, regardless of religious variety, which restricts the freedom of religion. Schindehütte sees some tendencies in this direction among Christians in Germany. Gröhe, however, called for a more differentiated concept of fundamentalism. Religious freedom in Islamic countries must extend to the public and private sectors. The right to Christian mission is a basic human right, as well as the freedom to change one’s religion.

Cevik used the debate to issue a call: “Christians come to Turkey!” Every official visit and any public affirmation of the freedom to change religion in Turkey is taken seriously by the politicians in his home country. Thus the situation of Christians has already improved significantly because of the current debate on EU accession for Turkey, and the issue of human rights is receiving more attention. Christians from other countries who take vacations in Turkey should not only “take in the sun” but also visit the Christian congregations in order to encounter the Christians there, as well as Turkish culture. Christians should not forget one matter, says Cevik. “We are obliged to pass on the hope that we have in faith.” 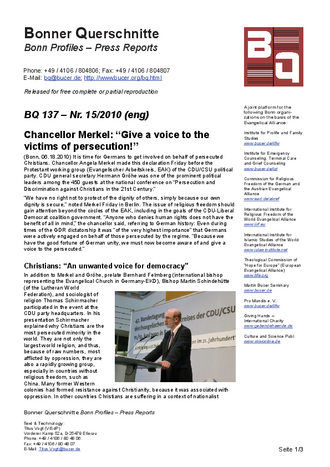