(Bonn, 17.06.2011) The Christian Democratic Union (CDU), the party of German Chancellor Angela Merkel, already has a strong record when it comes to furthering religious freedom and fighting the persecution of Christians and of adherents of other religions. Now the CDU’s Berlin based Commission for Development and Human Rights on the federal level is demanding an even stronger commitment to the assertion of religious freedom. Therefore the commission has passed the resolution ‘Worldwide assertion of religious freedom’. “It is good that the Government has made religious freedom a main focus of its foreign policy”, Arnold Vaatz, Chairperson of the Commission, emphasized. Now more attention should be given to this topic on the European level. 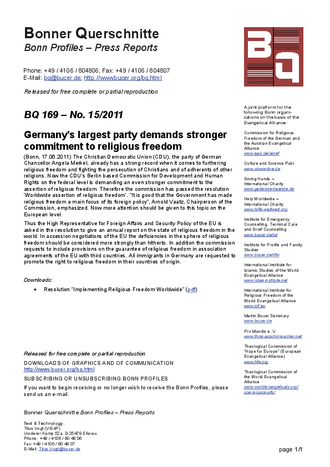