The Head of the Orthodox Church Meets with Evangelical Theologians

The World Evangelical Alliance Expresses its Solidarity with the Oppressed Patriarch 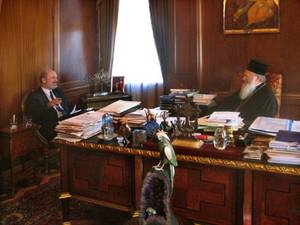 (Bonn, 09.11.2007) The German theologian and sociologist Thomas Schirrmacher represented the World Evangelical Alliance in a recent meeting with Bartholomew I, Patriarch of Constantinople and Head of the Orthodox Church. Schirrmacher brought the greetings of WEA general secretary Geoff Tunnicliffe and assured the Patriarch of the continued public support of evangelical Christians in light of the long term persecuted condition of the Patriarch and his church. For 150 years the WEA has spoken out in favor of freedom of religion, and already in the 19th century representatives of the WEA confronted the Sultan of Turkey regarding his persecution of the ancient Christian churches in his domain. Today this function of the WEA is especially pursued by the International Institute for Religious Freedom, which Schirrmacher leads. The Patriarch was presented with the recently published Book of Martyrs, 2007 (in German), edited by Schirrmacher’s office on behalf of the Human Rights Committee of the German Evangelical Alliance, which describes the problems faced by orthodox and other eastern churches in Turkey. 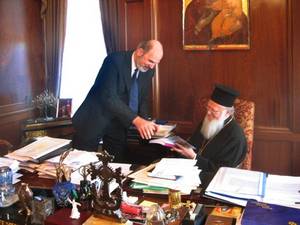 The Orthodox leader responded with thanks for the way German Christians, churches, and the German government have repeatedly given public expression to their solidarity with his church, which has included public visits by former chancellor Gerhard Schröder and current chancellor Angela Merkel. The Patriarch was given the most recent information on the “Code of Ethics in Missions” being jointly developed by the WEA, the Vatican, and the World Council of Churches; he expressed his agreement with the intentions of this document and cited his discussions with Turkish President Abdullah Gaul, in which he maintained that the Greek Orthodox Christians are loyal citizens who only want the same rights which are enjoyed by all other citizens. Schirrmacher enquired about a recent literary attack on the Patriarch by an evangelical author in the Turkish press and expressed his willingness to try to bring reconciliation in this conflict among Christians. 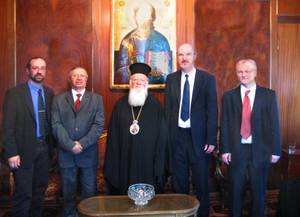 The second part of the meeting was devoted to problems of theological education, and for this reason Schirrmacher (Rector of Martin Bucer Seminary) was accompanied by two other senior German representatives of Martin Bucer Seminary, Vice President Thomas Kinker and Academic Dean Titus Vogt, as well as by Behnan Konutgan, President of the Turkish branch of MBS. They enquired if evangelicals can assist with re-opening the seminary of the Greek Orthodox Church in Istanbul, which has been closed since 1971. The Turkish study centers of Martin Bucer Seminary (Ankara and Istanbul) have recently opened their programs to students of other Christian confessions.

The Ecumenical Patriarch of Constantinople is the Head of the entire Orthodox Church worldwide, which has about 220 million members. The Orthodox Church honors him with a position above all other Orthodox Patriarchs, but the Turkish government has long restricted his activities and only recognizes him as the leader of the approximately 3,000 Greek Orthodox Christians in Istanbul. 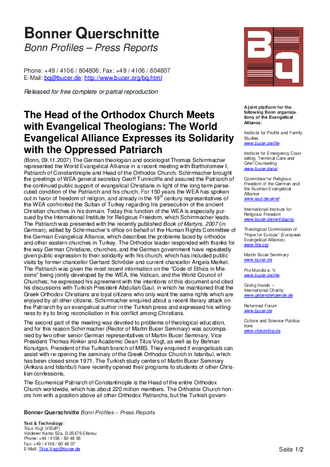