(Bonn, 09.09.2021) The World Evangelical Alliance honors the memory of Luis Palau, probably the greatest Spanish-speaking Christian evangelist in world history, who died at age 86 on March 11. 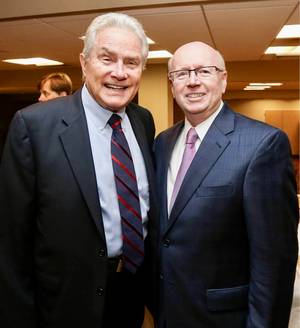 Palau, who began his career as a teenage preacher on the streets of Buenos Aires, Argentina, was an influential voice in Christian mission and evangelism for more than 65 years. Early in his ministry, he served as intern and occasionally as Spanish translator for the Billy Graham Evangelistic Association. Graham returned the favor by helping him start his own organization, Luis Palau Ministries, in 1978.

Although he preached in more than 80 nationsâincluding the Soviet Union in the 1970s and 1980sâPalau was best known for reaching the Spanish-speaking world through his festivals and daily radio programs.

Rev. RubÃ©n Proietti, President of the Latin Evangelical Alliance (the WEAâs regional affiliate in Latin America), worked with Palau for decades. He commented, âInnumerable people testify that they heard the Good News of salvation and gave their lives to Jesus through one of Luis Palauâs famous crusades. With passion and enthusiasm, he preached about his beloved Christ untiringly, delivering the message of hope at his huge gatherings under the âGood music and Good Newsâ motto or through his radio and television programs.â

Palau was a strong supporter of the WEAâs role in uniting evangelical Christians around the world in gospel-focused outreach. In fact, he wrote the foreword for a 1996 book tracing the first 150 years of the WEA, which was formerly known as the World Evangelical Fellowship.

âChristians who love the church worldwide, who love missionary work and the spread of the Good News of Jesus Christ, must stimulate and motivate support for this worldwide network,â Palau wrote in that foreword.

âLuis Palau is the visible evidence that God gives his gifts to all people around the globe, not just Westerners,â stated WEA Secretary General Bishop Dr. Thomas Schirrmacher. âHe is the proof that already decades ago the movement toward large-scale evangelism, which started in the Western world and was connected to names like John Wesley and George Whitefield in the 18th century, had moved to the Global South. We thank the Latin American church for their gift to our global community, we thank Luisâs many partners and staff for their decades of service through Luis Palau Ministries and we thank God for His gift to us in our dear brother who now sees and lives with the Lord Jesus whom he has been preaching all his life.â

Bishop Efraim Tendero, who led the WEA as Secretary General since 2015 until last month and now serves as Global Ambassador, echoed these sentiments saying, âLuis Palau showed that the work of mission and evangelism transcends ethnicity and race and has passed on this passion to his sons, who are working with a global network of evangelists.â

Dr. Geoff Tunnicliffe who served as WEA Secretary General from 2005 to 2014, said, âIt has been my privilege to be friends with Luis Palau for many decades. His passion for evangelism was reflected in his warmth, humility and compassion toward all people. I observed firsthand his ability and giftedness to motivate people, especially young people, to engage in the Great Commission and the Great Commandment. Luis had a great commitment to the World Evangelical Alliance and Christian unity. The way he engaged in Christian citywide festivals was a reflection of his desire to see the Church united in the cause of evangelism. We in the Church have lost a great champion. I believe his sons, Kevin, Keith and Andrew will enable the vision of Luis to continue in equipping thousands of evangelists around the world.â 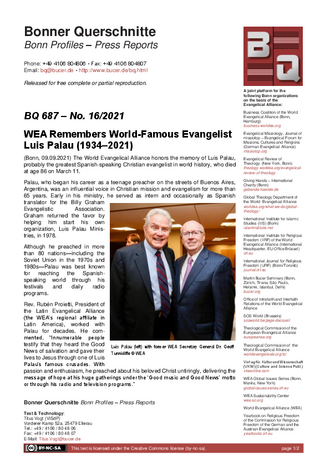