(Bonn, 27.06.2011) At one of the largest journalist conferences in the world, the annual Global Media Forum in Bonn, the Quran scholar Abdullah Saeed called upon Islamic theology and Islamic states to fully dispense with punishing apostasy, i. e., turning from Islam, to abolish apostasy laws, and to set Muslims and non-Muslims at liberty to a choice of religion. In classical Islamic theology this stance is indeed still a minority position, he said. However, Saeed was optimistic that people’s urge for freedom will help spread understanding that tough oppression of people of other faiths is not something that arises necessarily from the Koran and the teaching of the Prophet. Rather, it is something that was not stipulated until centuries later. It is a shame that when studies are produced and rankings conducted, practically all countries with an Islamic majority receive very bad grades with respect to freedom of religion. Article 18 of the UN’s Universal Declaration of Human Rights, which calls for freedom of religion, is good and right. Additionally, it benefits religion so much that Islamic theology has to ask itself what it has to change so that as a matter of course this article is associated with Islam. 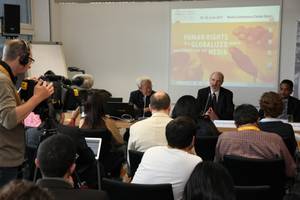 Saeed, who is originally from the Maldives, grew up in Pakistan and received his theological training in Saudi Arabia. He holds a teaching chair at the University of Melbourne financed by the country of Oman. Through his numerous books and lectures on all continents, he exercises a great amount of influence throughout the entire Pacific region. In his book Freedom of Religion and Apostasy, Saeed describes the horrible side of punishment of apostasy in many Islamic countries.

[This is the short version of the news. In case you have more space available for printing, please use the following text as cotinuation.] 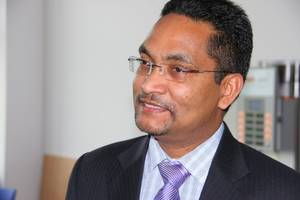 Organized by the International Institute of Religious Freedom, three professors on the Global Media Forum panel introduced the justification their religions have for religious freedom, alongside a Christian and a Buddhist representative. Prof. Somseen Chanawangsa of Thailand explained that it is in full contradiction to Buddhist teaching to denigrate or oppress other people on the basis of their beliefs. Indeed more is required than only to avoid overstepping human rights boundaries. It has to be positively demonstrated that one can live together with other people in harmony. For the Buddhist world, freedom of religion is a sensitive topic. “From a Buddhist point of view, respect of human rights is necessary. However, it is unfortunately insufficiently put into practice,” according to Chanawangsa. Authoritarian regimes rest upon religions in order to anchor their rule and to legitimize themselves as ordained by God.

Thomas Schirrmacher, who at the same time moderated the panel, explained that religious freedom in a country can only truly be implemented in a country if it is not only demanded by the state but rather when religions, above all the respective majority religions, want this as well. For this reason, it is important that religions justify their stance for themselves, demand implementation, and if need be push this through against their own adherents.

Schirrmacher traces the Christian perspective on freedom of religion back to the idea of human dignity that mankind has received as a created being of God and which Christians are always to respect. Faith is above all trust towards God and with that a completely personal decision of the heart. “If someone forces another person to become a Christian, that person has in fact not become a Christian, since that individual does not trust God and has not entrusted his cares and his guilt to God. From a Christian point of view, it is impossible to either punish others on account of having another faith or to misuse the state for it.”

With a view to Germany, Schirrmacher said the following about his Muslim colleague Saeed: “I wish that we had a comparable German speaking Islamic theologian who without any ifs or buts about it criticized the limitations on religious freedom in Islamic countries. Furthermore, I wish we had such a German speaking Islamic theologian who would help Muslims who would gladly advocate religious freedom deal with their bad consciences that their faith prohibits them from doing this.” One can only wish that Saeed’s books would be translated into German.

The panel discussion was recorded by several Islamic and European radio stations. The audio recording is already available around the world, and the video and long versions of the three discussion inputs will be released to the public shortly.

The Global Media Forum is an international media conference with 1600 participants, predominantly media representatives, from 188 countries. Since 2008, the conference has been put on annually by the international broadcaster Deutsche Welle, Bonn, to address varying topics.

The World Evangelical Alliance’s International Institute of Religious Freedom (Bonn, Cape Town, Colombo) is a network of professors and research facilities from all continents which conduct research in the area of religious freedom and its infringement and make their results available to universities, politicians, and the media. The institute publishes the International Journal for Religious Freedom.

For further information and research:

Freedom of religion and belief in the age of fundamentalism
It is often underestimated as a fundamental human right, but freedom of religion and belief is an essential component of free, democratic societies. Without it, a democratic state and neutral world outlook aren’t possible. But religious freedom must be supported by the religious communities themselves to be truly guaranteed in a given country. For this reason, advocates of religious freedom representing three world religions – Islam, Christianity and Buddhism – will engage in debate here.

Bio Saeed from GMF website: Abdullah Saeed is currently professor of Arab and Islamic Studies at the University of Melbourne. He has published over 12 books and a large number of articles. His publications cover Qur’anic hermeneutics, Islam in the West, reform of Islamic education and Islamic law, and Islam and human rights with particular reference to religious freedom and gender equality. Saeed is a member of the UNESCO Commission of Australia and a board member of the Australia-Thailand Institute of the Ministry of Foreign Affairs of Australia. He is well-known for his inter-faith activities and for his progressive outlook, and he is considered one of the key Muslim thinkers in Australia. He was elected fellow of the Australian Academy of Humanities in 2010.

Bio Chanawangsa from GMF website: Somseen Chanawangsa obtained a PhD in linguistics from Georgetown University in Washington, DC. Before his retirement, he was an associate professor of English as a foreign language at Chulalongkorn University Language Institute in Bangkok. Since 2000, he has been a fellow of the Royal Institute of Thailand, where he served on its advisory panel from 2004–2009. He is now a freelance lecturer, writer, and translator. Among his research interests are linguistics, translation, lexicography and English for Buddhist studies. All these are integrated into his long-term project to translate some important Thai-language books on Theravada Buddhism into English.

Bio Schirrmacher from GMF website: Thomas Schirrmacher, PhD, DD, is director of the International Institute for Religious Freedom (Bonn, Cape Town, Colombo), professor of the sociology of religion at the State University of the West in Timisoara (Romania), and distinguished professor of global ethics and international development at William Carey University in Shillong (Meghalaya, India). He is also a speaker for human rights of the World Evangelical Alliance, speaking for approximately 600 million Christians. He is a member of the board of the International Society for Human Rights. His newest publications include books on fundamentalism, racism, and Christians and democracy. 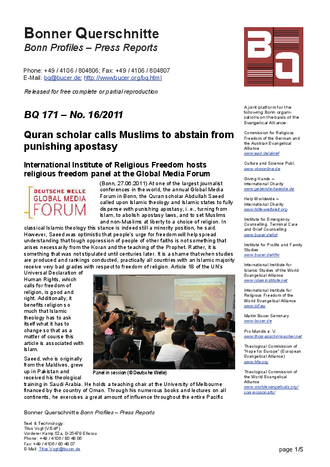