WEA Expresses Concern over Afghanistan, Calls for Prayer for Most Vulnerable Including Religious Minorities and Women

(Bonn, 17.08.2021) The World Evangelical Alliance (WEA) expresses its deep concerns over the take-over of Afghanistan by the Taliban who in the past have been known for persecution of religious minorities, suppression of women, drug trade and human trafficking. The WEA calls on churches and believers to pray for the country, especially for Afghan Christians and others who are vulnerable, and those who have already fled or are trying to flee abroad.

âWe are very concerned about the recent developments in Afghanistan and the dire prospects for all those who do not fit within the Talibanâs view of a society. Women, who will be among those who have most to lose, will likely again be prevented from enjoying basic rights, including tertiary education, professional careers, and even freedom to move around on their own. What is less reported is the plight of religious minorities, including Christians, who have suffered severe oppression during the past twenty years and who are now at even greater risk,â said Bishop Dr. Thomas Schirrmacher, Secretary General of the WEA.

âWe should not pretend as if everything was well in Afghanistan prior to the Taliban taking control of the country now. Converts from Islam have been killed in areas under the former official government, and war lords who controlled part of the country, and are now losing their power, were not much better,â Schirrmacher noted. âThe Constitution of 2004 stated that Afghanistan is an Islamic Republic with Islam as its state religion, leaving no place for religious freedom in the country. In reality, all religious minorities suffer in Afghanistan and will suffer even more now â including Muslim minorities like the Shiites and those Muslims who have become followers of Jesus Christ.â[1]

Highlighting the complexity of the nationâs history and culture, Schirrmacher also pointed out that the media at times portray the situation too simplistically, as if the Taliban represent only a small group of insurgents imposing their will on society.

âWhile there have been improvements for womenâs rights and other developments in recent years under the official government, these changes have not been welcomed by all Afghans. Instead, it should be noted that the backing of the Taliban in society has been much more significant than Western countries thought, with many people even voting for them in elections,â Schirrmacher said.

In addition to the oppression of religious minorities and the restrictions on women that are already being felt in many of the regions that fell to the Taliban in recent days, the country will likely again see a significant increase in illicit trade and slavery.

âTaliban finance themselves to a large extent through all kinds of criminal means, especially drug trade and human trafficking. Selling girls into sex slavery is no problem for them, especially if they do not belong to their faith community,â Schirrmacher said.

Calling on believers to pray, he said âour hearts cannot help but ache for the many Afghans who are longing for freedom but once again have to live in fear within their own nation, as well as the many who have fled to other countries as refugees leaving behind everything. Join us in prayer for our brothers and sisters in Christ that they would be protected and comforted. Scripture reminds us that we are one body in Christ and âif one part suffers, every part suffers with itâ (1 Corinthians 12:26a). And let us pray for new hope for the whole nation that is facing a very dark moment at this time.â

[1] Shiites are the largest Muslim minority, especially among the Hazaras and Qizilbash. For decades, the Taliban sought to eradicate the Hazaras in the regions it controlled, killing thousands of them for no reason. Many of them will now come under Taliban rule for the first time, and among those are also many Christian converts from the Hazara who will face even greater risk. Besides them, the vast number of adherents of Muslim sects like the Sufi order Ahl-ehaqq and non-Muslim religions have left the country by now. Those staying behind, however, live in constant danger and include Hindus, Sikhs, Buddhists, Bahaâi, Zoroastrians, Christians, atheists and others holding a secular worldview. Among all of them, the greatest threat is directed against those who changed their religion â a basic human right in international law â which are mostly Muslims who became followers of Jesus. Many of them belong to smaller ethnic groups that are already discriminated against by the Pashtuns, a Sunni Muslim ethnic group that historically dominated Afghanistan. 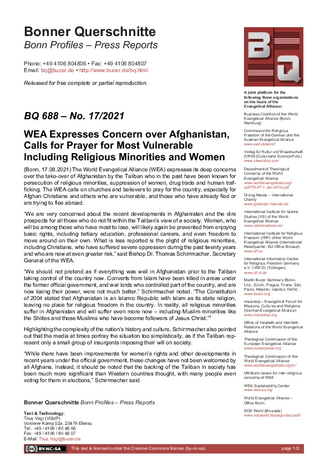