If a prosecutor sees missionary activities as criminal, then it is not difficult to understand how some people can become crazy and kill these people

orhan.kemal@tdn.com.tr), is one of the lawyers of the bereaved family of the Malatya victims. This article was published 22th of November 2007 in the „Turkish Daily News“.

Seven months ago, three Christian missionaries were ruthlessly murdered by a gang of Turkish nationalists in the eastern Anatolian city of Malatya. The killers broke into Zirve Yay?nc?l?k, a Bible publisher, and first tortured and then killed their victims by slitting their throats.

Seven months after the bloody murders, the prosecutor finally brought his case against the perpetrators. For seven long months we could not get any documents from the file because they had been declared confidential. We waited seven months for what? After reading the file, I have come to the conclusion that we waited for nothing! We do not know anything more than we knew seven months ago. So, what did the prosecutor do during that long period?

There are 31 files in this case and just 15 of them comprise information about the murder and the perpetrators. What about the other 16 files? You will not believe, but these files are about the activities of the victims whose throats were slit. The prosecutor retrieved all documents from the computers of the victims and put them in the case file as “evidence.” If I did not know the background I would think that there were two gangs fighting each other and the members of one gang killed the members of the other, and that the prosecutor collected evidence about both these gangs! In reality though we are talking about an unbelievable slaughter of three innocent people, whose only wrongdoing was carrying out missionary activities in the wrong place! But the prosecutor collected all information about their missionary activities. If a prosecutor sees missionary activities as criminal then it is not difficult to understand how some people can become crazy and kill these missionaries!

Furthermore, these files, which are public now, may lead to new murders because they include many details on other Protestants who reside in different parts of Turkey. The addresses, emails, telephones of many other Turkish Protestants are in the files, which have already been in the hands of the murderers. The prosecutor failed to make a thorough investigation and he has also put many other lives in danger. Why all this information in the file, I do not think anyone can explain this.

Only a glimpse into the files is enough to understand how inefficiently they were prepared. The statements are not taken properly, correct questions are not asked, and necessary details are not traced. I would like to give you some specific information but if I went into all details of the weirdness of the files, this article would turn into a small booklet. Therefore, I would like to give you some examples for the time being in order you to get a general picture of the preparation process of the Malatya massacre trail.

Emre Gunayd?n, number one suspect in the case file, states that some people directed him toward Protestants and he gave some names. But he was not asked any question about how exactly he was directed or what he was told. Emre states that he was a member of the Ülkü Ocaklar? (the youth wing of the ultra-nationalist Nationalist Movement Party, or MHP) but he was not asked a single question about his membership in this Ülkü Ocaklar? whose members had previously demonstrated in protest to missionary activities of the publishing house.

Ruhi Polat’s statement, who Emre indicated informed him about missionaries, and who is a member of the MHP, is just half a page long. Neither the police, nor prosecutor conducted any investigation about the connections of this person. This person says he talked over the telephone with Emre once, but if you look at the telephone traffic in the file, you can see that before the murders took place, there had been many telephone conversations between this person and Emre. Yet no one bothered to ask them about the contradiction. Even an uneducated eye can see that many people who have apparent contacts with the gang members and who were probably involved in different stages of this plot are just set free because of the insufficient investigation into their relations and actions. All statements in the file are cursory and lack vital details. From the statements it is clear that this murder had been in planning and preparation for at least a couple of months. It is really very difficult to believe that the police or the gendarmerie had no intelligence about the plans of these murderers.

From the communications sent to the file we understand that Necati Ayd?n, one of the victims, had been under constant surveillance and in his police record he has recorded as a former criminal for the “crime” of “missionary activity.”

The prosecutor who put all kinds of documents about the activities of the victims did not conduct any investigation about the provocative publications of the local newspapers.

In short the case has been prepared in such a way to say a bunch of young people got angry with the missionaries and decided to eliminate them. That’s simple.

Massacre for the homeland:

If you just look at the last pages of the files however you can see a completely different picture. There are letters these murderers sent to their families and their girl friends. In these letters, they say that they are not ashamed of what they did, because they did it for the country, and that they sacrificed themselves for the homeland. They want to be praised and appreciated. And there must be some people who give them these positive feelings.

If state officials keep talking everyday that Turkey is in imminent danger, that there are internal enemies of this country, that missionaries are the agents of foreign states who try to break up Turkey and so on, such horrible crimes are inevitable. If “internal enemies” such as missionaries are shown on countless Web pages as legitimate targets, and no legal action is taken against this mania, we will continue to see new murders, attacks and slaughters.

Both the Hrant Dink and Malatya cases are extremely important for the future of this country. The file prepared by the prosecutor created huge disappointment for me. However, Dink’s lawyers and some lawyers from the ?emdinli case (a bookstore bombing in the southeastern town of ?emdinli in 2005) will be attending the Malatya case. In this way we will create a collective memory and I hope this memory will help us to cast a light on the web of dark relations.

The first hearing in this case is this Friday in Malatya. We will try to make a spark! 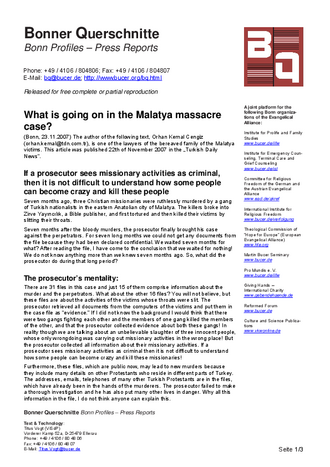