A new Page of History is Written

“Christian Witness in a Multi-Religious World: Recommendations for Conduct” published

(Geneva / Bonn, June 29, 2011) “Today represents an historic moment in our shared Christian witness,” claimed Jean-Louis Cardinal Tauran, president of the Pontifical Council for Interreligious Dialogue. For the first time in history the World Council of Churches, representatives of the Vatican, and the World Evangelical Alliance have issued a joint document.

“Mission belongs to the very being of the church.” These words stand at the beginning of the document that was delivered in a public ceremony celebrated at the headquarters of the World Council of Churches in Geneva yesterday. Representatives of the above named church organizations worked more than five years in a series of larger and smaller conferences to come up with a document stating what it means to bear testimony to and pass on the Christian faith in the multi-religious world of the 21st century. The result is a document reflecting classical foundations for Christian witness and followed by principles and recommendations.

Cardinal Tauran called upon those present with the following words: “We Christians have the duty to proclaim our faith without any compromise . . . We are not teachers giving lessons about God. We are messengers of salvation brought to us by Christ’s death and resurrection, who is still living today.”

Geoff Tunicliffe, the Secretary General of the World Evangelical Alliance (WEA), pointed out that all four major concerns which the WEA have defended since its founding in 1846 play a leading role in the document presented. These main concerns are: 1. Christian Unity, 2. Human Rights, 3. World evangelism, and 4. Religious freedom. The Secretary General of the WEA spoke of a “powerful document,” not least of all due to the fact that through the representatives of the various organizations 90% of the world’s Christians are represented. Mission is at the “heart of the Gospel,” and without mission the church is dead. Christian witness should not only take place through words; rather, it should likewise take place through deeds.

Thomas Schirrmacher, who coordinated the efforts for the World Evangelical Alliance, made it clear that the document presented is in no way a compromise. Over the years there have been very skeptical voices from assorted directions which held a document with any substantial content regarding the topics of freedom of religion and mission as impossible to compose. In the end there are now distinct recommendations which, on the one hand, clearly bear witness to Jesus’ mandate to his church. On the other hand, there are also limits highlighted with respect to mission tied to the biblical message and religious freedom and human rights are seen as the other side of the coin of mission.

[This is the short version of the news. In case you have more space available for printing, please use the following text as continuation.]

In this connection the text points out in its first foundational point that that it is not only a joy to give an account to others about one’s own hope, but that rather this has to happen with “gentleness and respect” (with reference to 1 Peter 3:15). In the final point of the foundations it is reinforced that while Christians have the responsibility to bear witness to Jesus, “conversion is ultimately the work of the Holy Spirit.” According to Schirrmacher, this theologically excludes any thought about the possibility of a forced conversion. This places limits on Christian mission, not, for example, for political reasons but rather due to the fact that it is biblical.

Archbishop Pier Luigi Celata said in the subsequent press conference that the document is built upon two pillars: the first is Jesus’ mandate to make the Gospel known, and the second is the dignity every person has by virtue of the creation. 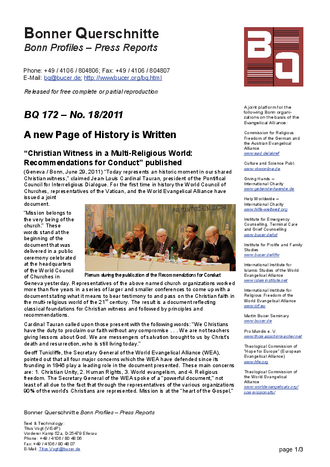