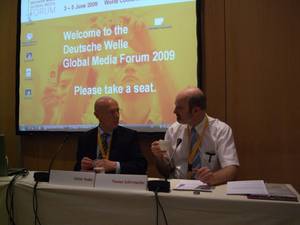 (Bonn, 06.06.2009) My announced contribution to the Global Media Forum on the relationship between civil society and the German Army went off delightfully. It was not the first time that my counterpart was retired Colonel Hans W. Odental. The moderation was conducted by Günther Knabe, who has many years of experience in Afghanistan and Asia, was most competent, and the audience came from all continents. The discussion integrated well with the overall topic of the Deutsche Welle’s Global Media Forum, which was how journalists and the media can help assuage crises. Congratulations to the Deutsche Welle on a successful Forum!

There is hardly any country on earth like Germany where the civil society can so directly participate in discussions about the army. No one expects wrongly understood nationalism where everything that the army does will be found to be wonderful (as it was in the emperor’s time). The number of those who basically reject the idea of an army is also small. This is also due to the fact that the Bundeswehr (German Army) may not ‘conduct war.’ Rather, it may participate in defense measures or peace missions (even if that has occasionally been linguistically exaggerated for the sake of political correctness). One only has to think about the report of the Parliamentary Commissioner for the Armed Forces. There everyone can publicly learn about (almost) everything that has gone wrong in the Bundeswehr, and even soldiers who are treated badly find therein a public advocate. 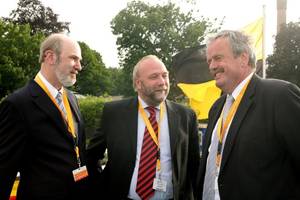 Unfortunately there are too few citizens, few too Christians, few too many theologians, and few too many ethicists who take advantage of the opportunity to thoroughly inform themselves about internal Bundeswehr questions and then to participate in discussions about the ethics of the ‘inner leadership’ of the Bundeswehr, either where they are stationed or where they find themselves in action. I have in any case always been cordially received by the Bundeswehr as ‘moral support’ just as much as a civil critic.

The first photo shows Günter Knabe und me during a panel discussion, while the second one is an official Deutsche Welle press photo (photo: DW/K. Danetzki). To my right are Günther Nooke, the Federal Government’s Commissioner for Human Rights Policy and Humanitarian Aid, and Erik Bettermann, the Deutsche Welle Director. 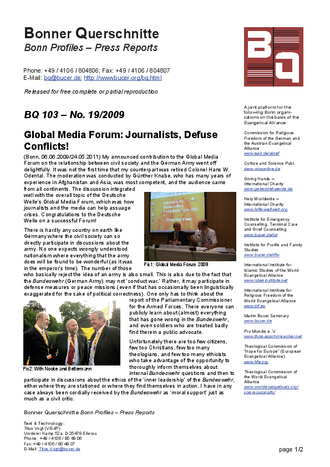