Director of the IIRF holds guest lecture in Nepal

(Bonn, 04.07.2011) In a guest lecture at the largest university in Nepal, the sociologist of religion and director of the International Institute of Religious Freedom, Thomas Schirrmacher, met with the applause of hundreds of largely Hindu students as he represented the view that the term fundamentalism often is used in the west in order to denigrate people of all faiths in the southern hemisphere in one broad stroke. 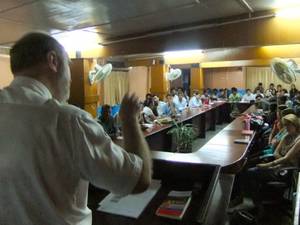 Schirrmacher had been invited by the head of the Department of Conflict, Peace and Development Studies in the Faculty of Humanities and Social Sciences of the Tribhuvan University, Professor Dr. Hem Raj Subedee, to speak in connection with the topic “Fundamentalism as a militant truth claim: How religious freedom overcomes fundamentalism towards a peaceful society.” The state university, founded in 1959 and located in a suburb of the capital city of Kathmandu, is the largest in the country. The prime minister of Nepal is the chancellor of the university, and the minister of education is the pro-chancellor.

The background for the invitation is that the constitution of Nepal has only guaranteed freedom of religion since 2007 – only proselytizing remains forbidden. However, the interim constitution is still to be replaced by a final version by the middle of 2011.

[This is the short version of the news. In case you have more space available for printing, please use the following text as cotinuation.]

What more can one demand from a religious community in a ‘modern,’ democratic state than that it advocate freedom of religion, and with it, the religious neutrality of the state, the separation of church and religious structures from the state, and respect for other religions and worldviews in a political setting? 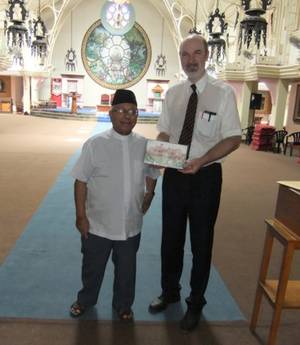 Prior thereto, Schirrmacher had visited Archbishop Anthony Francis Sharma, S.J., Vicar Apostolic. Sharma has been the highest ranking Catholic dignitary of the Roman Catholic Church in Nepal since 1984 and since 2007 has held the rank of Vicar Apostolic. For many years Sharma performed forbidden Easter masses at different location and was arrested each time at the end of the worship service. His cathedral, the Church of the Assumption, was built in 1995 as the first Catholic church in the country. Previously, from 1952 onwards, there had only been scattered Evangelical churches. Several bomb attacks have been made on the cathedral. Most recently a home-made pressure cooker bomb with sharp nails exploded on May 23, 2009 amidst 500 visitors at a Sunday mass, killing three participants and severely injuring 14 others. A small organization from within Hindi fundamentalism, the National Defence Army, acknowledged responsibility for the attack. The assailants and their initiator were arrested a few weeks later, but up to this time they have not been charged, probably because they are serving time for other crimes.

Additionally, Schirrmacher met with the leader of the International Human Rights Organization Rights Without Frontiers in Nepal, Raju Thapa, who introduced him to the current human rights situation in Nepal and its small neighboring countries.

One topic was the status of negotiations on the part of the highest court as to whether children’s rights and human rights of Kumaris are infringed upon. These are prepubescent girls who are worshiped as divine, whereby the most important ones do not go to school but rather always live in a large temple room. Schirrmacher had beforehand observed the worship of the girls together with Raju Thapa. This question is in connection with an IIRF international research project relating to how religious freedom is restricted by other human rights.

Photo 1: During the Lecturing

Photo 2: With Archbishop Sharma in the Cathedral of Kathmandu 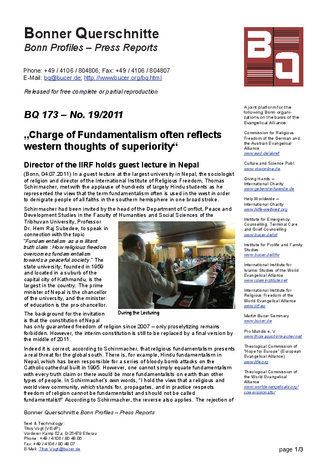