Work Ethics and the Economic Crisis

(Bonn, Prague, 2009-06-06) The Evangelical Reformed Church of Lithuania has asked Thomas K. Johnson to present a special lecture on “The Spirit of the Protestant Work Ethic and the World Economic Crisis,” taken from a small book Prof. Johnson is preparing. The ERCL asked Dr. Johnson these questions to prepare for the lecture:

ERCL: In our June 20 Synod meeting you will declare the basic principles of reformed work ethics. You said, “If we keep these principles, we can recover from the crisis.” – Please explain.

Johnson: Yes, our crisis goes far beyond problems in banking, the stock markets, or government economic policy. We need reforms in banking and economic policy, but we also need to reconsider the basic values and ideas about work, life, and money that we all bring into our work and economic life. I call this package of ideas and values we need “The Spirit of the Protestant Work Ethic.” Economic recovery may be slow and painful. But it is the right time to make some deeper changes in how we think about many things. Our historic Protestant principles of diligence, honesty, and thrift can contribute to a more humane way of life and to a stable but growing economy over a long period of time. A Czech economist has compared our economic situation to waking up with a terrible hangover after a night of hard drinking. The changes needed are more than taking aspirin or changing brands of vodka.

ERCL: Usually the hierarchy of Catholic Church says very little about work ethics. Why is this so important for reformed people?

Johnson: I think the problem is more that our Catholic neighbors have not learned all that the Vatican and the better Catholic theologians are saying about work ethics. We Protestants have a similar problem, which is why I am trying to write on this topic, as are some of my other Protestant colleagues. Since John Paul II, Catholic and Protestant theologians have shared a constructive dialogue about work ethics. Some Catholic theologians say that John Paul II learned a lot about social ethics from the Dutch Reformed theologian Abraham Kuyper. And in recent years, many of us Protestants have learned from our Catholic colleagues in this area. I learned from the writings of John Paul II.

The big problem I see is that both Protestants and Catholics have followed a mixture of communist and consumerist ideas about work and business. The world would be much better if our consumerist and communist neighbors followed Protestant or Catholic ideas about work and business. Something like this happened in the past, when much of Europe was influenced by the ethics of Martin Luther and John Calvin.

ERCL: How do reformed Christians correlate human activity with God’s grace? For some Christians it is traditional to look for better times, pray and….wait for God’s grace. But a very active person – with his whole way of living – is this person not fighting against God’s sovereign decrees?

Johnson: I believe God created us in his image with the responsibility to manage and care for his world. God has a sovereign plan which he will surely accomplish. And because we are in his image, we should also have plans which we try to accomplish very actively and energetically. Because God created us this way, our energetic activities will not prevent God from carrying out his plans; our activity may be the way in which God carries out his plans.

I sometimes think about this question when I walk our family dog. When the dog pulls very hard, it is hard for me to walk in a straight line, since the dog weighs about one third of my weight. But we must not think we can pull one third as hard as God can pull, and we must not think of our relationship with God as similar to being a dog on a rope. There is no comparison between how hard we can pull and how hard God can pull on a leash or rope; furthermore, God can easily accomplish his will by means of my pulling, not in spite of my pulling.

ERCL: Can you please give us more explanation about the phrase in an advertisement to the press that the 16th and 17th centuries ages formed a golden age in our history. At this time the reformed faith was a dominant faith in our country.

Johnson: We have to be quite careful when we talk about a “golden age,” because we must never forget that in the 16th and 17th centuries many people lived in terrible poverty and without significant medical care. And that era in European history was the time of the terrible so-called “wars of religion,” which I regard mostly as wars which destroyed true religious practice, not as wars which were honestly caused by religion. But there was a certain type of flourishing which we see in that era: new political developments which led to democracy, new educational initiatives, new beginnings in natural science, and new economic growth. The classical Protestant faith made significant contributions to these very positive cultural developments. Today we need to understand and build on these contributions of our fathers and mothers in the faith.

ERCL: Traditionally the Scandinavians, who have a Protestant religion, have lived better than Greek Orthodox or Portuguese Catholics. So what happened to our neighbors, the Latvians, since they are also reformed?

Johnson: To be honest, I do not know Latvian history as well as I should. But the relationship between a religion and a society is never automatic or mechanical. The direction of a society is the result of the decisions and actions of millions of people. When the Christian faith is playing its proper role in the lives of people, in addition to giving them the gospel of Christ, it will also provide the ideas and values needed to make life flourish. But this whole positive process will only happen if people honestly accept healthy values and live by them. If millions of people honestly practice diligence, honesty, loyalty, and thrift, which we Protestants should preach, then that society can be expected to flourish. The mere presence of Protestant church buildings or Protestant institutions will not automatically contribute a lot to a society.

ERCL: Is it possible for the ERCL and the Lithuanian catholic church to work together to help the Lithuanian people to overcome our current and future problems?

Johnson: It is certainly important that Protestants and Catholics attempt to encourage and assist each other in regard to social, political, and economic problems. Our basic ethics are very similar in these areas; cooperation and joint efforts in regard to business and economic ethics may provide a good context for friendly discussions of the religious questions on which we may disagree. I would love to see extensive Protestant/Catholic cooperation with regard to renewing the moral/cultural foundations of a growing and humane economy.

Thank you for your interest in what I have to say.

www.iics.com) and Vice President for Research of Martin Bucer Seminary (http://www.bucer.de/das-seminar/kollegium-mitarbeiter/johnson.html). During June, 2009, he is Visiting Theologian of the ERCL and teaching at Vilnius Pedagogical University. 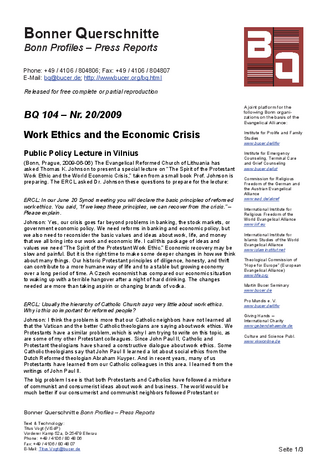