(Bonn, May 20, 2015) Patriarch of the Syriac Orthodox Church of Antioch, S. H. Moran Mor Ignatius Aphrem II, heartily thanked the World Evangelical Alliance (WEA) – as his predecessor had likewise done – for its intensive efforts for discriminated and persecuted members of his church and its members on all levels - through prayer, through humanitarian help, through the media, on the political front, and with the UN. The General Secretary of the WEA, Bishop Efraim Tendero (from the Philippines), had recently met with the General Secretary of the United Nations and had urged setting the situation Christians face in the Middle East at the top of the agenda. 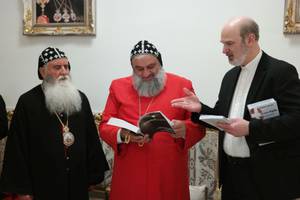 Upon the occasion of an official visit of the Patriarch to Germany Thomas Schirrmacher gave an address demonstrating solidarity and expressing good wishes on behalf of the World Evangelical Alliance. This occured within the framework of the Church Congress of the Syriac Orthodox Church of Antioch in Germany, which took place in the St. Jakob v. Sarug cloister in Warburg/Westphalia.

In addition to his official audience with the Patriarch of the Church, S.H. Moran Mor Ignatius Aphrem II, there were also a number of additional conversations with the head of this Eastern Church, as well as with the Syrian Archbishop in Germany, the Netherlands, and Sweden as well as bishops of other churches. At the same time, the present persecution of Syrian Christians in their homeland in the Middle East took central focus. Schirrmacher had an additional audience with the Patriarch as the Deputy Chairman of the Advisory Board of the Central Council of Oriental Christians in Germany (Zentralrates der Orientalischen Christen in Deutschland, or ZOCD), together with the Chairman of ZOCD, Simon Jacob. 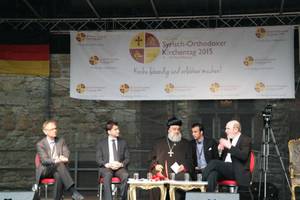 During the Church Congress. there was a panel discussion on the question: “Christians in the Middle East – an End to their History? Participants along with the Patriarch were Thomas Schirrmacher and Prof. Heribert Hirte, a Member of the German Parliament who represented the CDU/CSU faction in the German Parliament, the party of the German Chancellor Angela Merkel. Prof. Hirte is the Chairman of the Stephen’s Circle (Stephanuskreises), an interdenominational discussion group within the German Parliamentary with over 80 MP’s as members. It takes a special stand for religious freedom and works for the cause of persecuted Christians around the world.

Prof. Heribert Hirte underscored how important on-site help is for Oriental Christians so that IS does not achieve success by making Christians have to flee. Nevertheless, it is correct to accept civil war refugees here in Germany. Due to the high number of asylum seekers who come from countries which are safe and largely have no chance for having their asylum recognized, it remains difficult to allocate the necessary capacity to those who are politically and religiously persecuted. However, they must unconditionally have priority.

Prof. Thomas Schirrmacher emphasized that the political discussion of whether the killing of Oriental Christians 100 years ago was genocide or not is bad enough in itself.“ What is particularly bad is that this is taking place in light of the fact that IS and other forces want to complete what was not completed 100 years ago. The genocide of Syrian Christians is in full swing. It was just a few days ago that the Grand Mufti of Saudi Arabia called for there to be no more churches in the Arab world in ten years. For Christians it does not matter if it is IS or Saudi Arabia which stands opposed as an enemy, even if the latter is officially fighting against IS. In the end, the goals are the same. 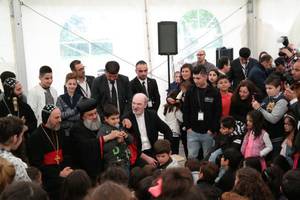 As to the question of whether Oriental Christians have a future in the Near East, Patriarch Ignatius Aphrem II answered as follows: We must and we want to have a future there.” Basically, as Syrian Christians, they are “people who belong to the country.” With that, he pointed to a close to 2,000 year history which the Syrian Church has in the Near East and which goes back all the way to the first Aramaic-speaking Christian congregation. The Patriarch emphasized his gratitude to the German government as well as to Christians and churches in Germany for all the aid which is being extended to all the refugees from Syria and Iraq. At the same time, he reminded his hearers that many refugees do not even reach Europe. Rather, he said they die while on the way. And that is not only due to unfit boats. In part, Christians are singled out from among the refugees by the smugglers and selectively killed.

Patriarch Ignatius Aphrem II criticized, however, that the pledge to arm contingents of Christian troops who put themselves under the Iraqi government and army is not being kept. The weapons are always going to others. 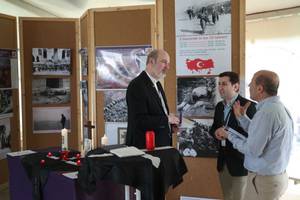 Thomas Schirrmacher made it clear that in his view there are basically two alternatives: Either there will be serious protection offered Christians on-site, or the countries of Europe will have to “seriously open the doors for refugees.” If instead one waits a couple of years, there will simply no longer be any local Christians. And leaving the refugee catastrophe to the neighboring countries of Jordan, Lebanon, and Turkey is something which cannot be done for a longer period of time. At least Jordan and Lebanon, where in the meantime the number of refugees in parts makes up more than 25% of the population, are not in such a position to handle the situation, and in time one would have to worry about the political stability of these countries. 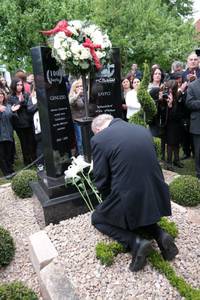 A memorial was dedicated by Patriarch Ignatius Aphrem II on the premises of the cloister during the Church Congress as a constant reminder of the victims of the genocide. Schirrmacher prayed for the protection and peace of Christians in the Near East as a representative of the 600 million Protestants who are affiliated with the World Evangelical Alliance.

Photo 1: Thomas Schirrmacher presenting a number of books to Patriarch Ignatius Aphrem II, among them a comprehensive work by the WEA on the topic of Christian persecution

Photo 2: In lively discussion with the Patriarch

Photo 5: Visit to the exhibition on the genocide of Syrian Christians

Photo 8: Dedication of the Sayfo (the genocide of Syrian Christians) memorial

Photo 9: Thomas Schirrmacher prays in front of the memorial for the protection of and peace for Christians in the Near East 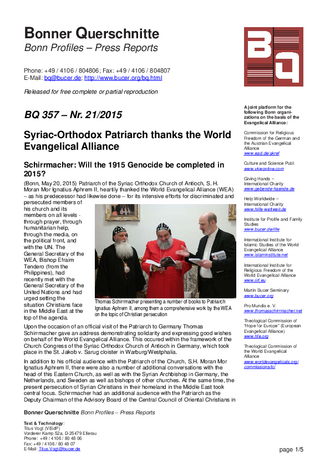