(Bonn, 28.05.2015) The World Reformed Fellowship  (WRF) installed a new International Director during its General Assembly, which occurs every three years. Prof. Dr. P. J. (Flip) Buys, from South Africa, took over from Prof. Dr. Samuel Logan, who had previously been president of Westminster Theological Seminary in Philadelphia, and who served as International Director of the WRF since 2005.

The World Evangelical Alliance (WEA), to which the World Reformed Fellowship belongs as a member, congratulated the new International Director of the WRF on his election. Thomas Schirrmacher, who was a plenary speaker at the WRF General Assembly, brought the wish for Godâs blessing from the WEA General Secretary, Bishop Efraim Tendero, who is from the Philippines. With warm words, Schirrmacher thanked Dr. Logan for a decade of top quality cooperation between the WRF and the WEA, as well as between their representative Theological Commissions, especially in the areas of religious freedom/persecution of Christians and understanding Islam. Schirrmacher said, âI know only a very few Americans who have such a heart for all cultures and who really want to hear from all of them. Sam, we are truly going to miss you!â

Dr. P. J. (Flip) Buys was born in 1947 in South Africa. His doctoral dissertation was an exegetical study of the relationship between evangelization and church development. Buys is a pastor of the Reformed Church of South Africa and has initiated numerous projects in the field of HIV/AIDS and the resulting poverty. He teaches as an adjunct professor of missiology for Northwest University in Potchefstroom, South Africa.

Prof. Dr. Samuel T Logan, Jr, was Professor of Church History and President of Westminster Theological Seminary, 1991-2005. He then became the International Director of the WRF. He is a pastor of the Orthodox Presbyterian Church.

In addition to Thomas Schirrmacher, the WEA was represented by Christine Schirrmacher, who, along with the Indonesian evangelist Dr. Stephen Tong, sketched the worldwide situation in relation to Islam in plenary speeches.

Important Reformed educational institutions from around the world belong to the WRF, including Westminster Theological Seminary in Philadelphia (USA) and the Centro Presbiteriano Pos-Graduacao Andrew Jumper of Mackenzie University in SÃ£o Paulo, Brazil. Martin Bucer Seminary cooperates with both institutions.

When they apply for membership in the WRF, new members have to identify themselves as affirming at least one of the following historic confessions: the Belgic Confession, the Canons of Dordt, the Gallican Confession, the Heidelberg Catechism, the London Confession of 1689, the Savoy Declaration, the Second Helvetic Confession, The Thirty Nine Articles, the Westminster Catechism, or the WRFâs own statement of faith. 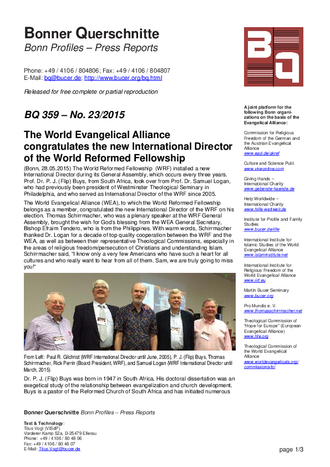