(Bonn, 17.07.2009) Tough-Minded Christianity is a collection of essays about the great work of John Warwick Montgomery (*1931), a living legend in the field of Christian apologetics who has earned eleven degrees in philosophy, theology, law, and librarianship, debated historic atheists including Madalyn Murray O’Hair, and influenced the work of bestselling authors such as Josh McDowell. 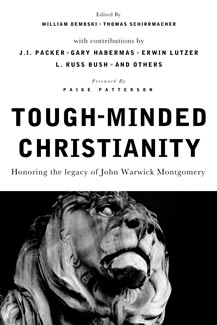 Contributors to this volume include James I. Packer, John Ankerberg, Erwin Lutzer, Vernon Grounds, Gary Habermas, among many others. Paige Patterson writes in the foreword that John Warwick Montgomery did the “intellectual heavy lifting” that undergirded the conservative renewal of the Southern Baptist Convention.

The Festschrift is an American-European joint venture with an editor from each continent. Co-editor Thomas Schirrmacher from Germany stated that he knows very few Americans who, like Montgomery, have become so much a part of European culture that many in Germany and France are astonished that he was not born in continental Europe. He really helped to develop an apologetic for European cultures, not just a copy of what works in the US.

Montgomery is presently Distinguished Professor at Patrick Henry College and Honorary President of the Academic Board of the International Institute for Religious Freedom of the World Evangelical Alliance.

John Warwick Montgomery, a lawyer-theologian, holds dual citizenship (US and UK) and resides in France. His international activities have brought him into personal contact with some of the most exciting events of our time: he was in Paris during the “days of May” 1968; he assisted East Germans to escape during the time of the Berlin Wall; he witnessed the 1987 bloodless revolution in Fiji; and he was in Beijing at the time of the Tiananmen Square atrocity in June 1989. In recent years he has defended the religious liberties of Christian believers in national and European courts. Dr. Montgomery is the author of some fifty books in five languages and over one hundred scholarly articles. He holds eleven earned degrees, including a Master of Philosophy in Law from the University of Essex, England, a Doctor of Laws from Cardiff University, Wales, a Ph.D. from the University of Chicago, and a Doctorate of the University in Protestant Theology from the University of Strasbourg, France. He is an ordained Lutheran clergyman, an English barrister, an avocat à la Cour (Paris), and a member of the bars of California, Virginia, the District of Columbia, Washington State, and the Supreme Court of the United States. He is Emeritus Professor of Law and Humanities, University of Bedfordshire, England.
Biographical articles on him appear in Who’s Who in America, Who’s Who in France, the European Biographical Directory, Contemporary Authors, and Who’s Who in the World.

The German editor Thomas Schirrmacher has published the latest works by and about Montgomery, including his Tractatus Logico-Theologicus (a major defense of the truth of Christianity in the style of Ludwig Wittgenstein’s Tractatus, 2002, 2nd ed. 2003); Heraldic Aspects of the German Reformation (2003); Christ Our Advocate (2002), as well as Ross Clifford’s John Warwick Montgomery’s Legal Apologetics: An Apologetic for All Seasons (2004). He also reprinted Montgomery’s German book Hat die Weltgeschichte einen Sinn (2003) and his French books Jésus: La raison rejoint l´histoire (2003) and La Mort de Dieu (2009).

JW Montgomery is a lost gem in Christianity, likely because he is of a another intellectual level from most. Astounding can only begin to describe a career filled with books on numerous subjects as well as doctorate degrees to back them up, and then his debate history with major players such as Madalyn Murray O’Hair, Thomas Altizer, and recent ones with likes of major Muslim apologist, and then his legal case history winning major human rights issues.

44 contributors to this volume are organized into six groupings: Christian Worldview; Nature of Nature; Doctrinal Integrity; Defending the Faith; Law, Ethics, Society; Tribute. What surprised me somewhat is the non-Lutheran contribution here, with there only being four that I could identify, allowing that some of the laypeople might be as well.

Having read at least two in each of these categories, I can relate that they are superb for the most part. They are captivating, whether or not your view concurs with that being offered. A few words about several of these which put forward interesting points.

At the top of the list would be Angus Menuge’s excellent essay: “The Transcendent Incarnate.” Here he argues that where one starts his apology is vital. Most would start at the top, while Montgomery starts at the bottom, with Christ incarnate. This has many advantages to the Christian defender, since it goes right at the point of the superiority of the Christian God over other contenders, and balances firmly on the historicity of the Biblical documents for eyewitness evidence. This flows well, he argues, in areas of not only theology, but human rights and ethics. This fine statement at the end: “Starting at the bottom, although it requires an arduous evidential apologetic, promises to deliver more accurate, objective, and universal answers. Perhaps not only theologians but also Christian philosophers, historians, ethicists, and human rights activists could benefit from laying the foundation before building the roof.”

I. Howard Marshall’s contribution on importance of the resurrection in justification is thought provoking. Dallas Miller’s analysis of JWM’s debate career is insightful, especially the opening sharing of JWM’s portrayal of Sherlock Holmes fame to a gathered religious profs conference. Equally enlightening is Christine Schirrmacher’s contribution on Muslim Immigration to Europe and its Challenges, where she points out the difficulties in this part of the world of assimilating Muslim immigrants into European culture, and the resultant challenges to running two political control groups and two ethical groups. Robert Rogers, a Calvinistic Baptist, attempts to run Lutheranism in the Calvinistic TULIP formula. Wonder how JWM reacts to this, but for this Lutheran, he misses the mark on numerous points, especially omitting the center of theology of the cross and incarnational/sacramental emphasis of Luther. Lutheran Craig Parton provides a fine essayal tribute to his mentor as an evangelical, evidentialist and confession Lutheran apologist.

This fine work with prominent names will provide more excellent reading in support of a rich life’s contribution by Montgomery. Many will fine this an inspiring read which will vector them off into JWM’s writings as well as many others.

The year is far from over, but I still feel justified in saying that Tough-Minded Christianity will most likely be the best collection of Christian essays released this year. I have read numerous collections from Beyond Opinion, (Thomas Nelson), Passionate Conviction (B&H), To Everyone An Answer (IVP), Why I Am A Christian (Baker) but this collection (768 pgs/ 43 Essays) deliver a much broader scope of quality essays. Its numerous sections includes: (1.) The Christian World View (2.) The Nature of Nature (3.) Doctrinal Integrity (4.) Defending the Faith (5.) Laws, Ethics Society (6.) Tribute. It hard to find fault with such an excellent collection expect to say that it might not appeal to someone that want an anthology that has a narrower focus. For example if someone wanted an anthology dealing with the New Atheists like B&H upcoming title Contending with Christianity’s Critics. A book of that nature would appeal to them more since this book had only have eight essays (119 pgs in total) specifically on that subject, 15 if you include the Christian Worldview section. While To Everyone an Answer (a apologetics anthology) has 18 essays on that specific apologetics topics and 2 on Ethics, Law, Society.

Why such a broad scope? Because the book is in honor of John Warwick Montgomery, and he is a man of intense scope. He has more PhD’s and Graduate degrees than I have fingers, in essence he has a hand in about every field and the book reflects on his contributions and has essays in the fields in which he has worked. As for the clincher, the quality of the essays? Names such as J. I. Packer, Dembski, Yamauchi, I. Howard Marshall, Geisler, Habermas and Lutzer should signal there is quality and editors such as Dembski and Schirrmacher ensured the final product was coherent and enjoyable. Even names that others may not be familiar with such as Peter Zoller-Greer deliver superb essays that fascinate the mind such as The Scully Experiment in his essay, “LOGIC, QUANTUM PHYSICS, RELATIVISM, AND INFINITY”. If you are getting one anthology this year get TOUGH-MINDED CHRISTIANITY it is a solid, diverse mix of quality Christian Essay honoring a fascinating man and exploring interesting and relevant topics today. HIGHLY RECOMMENDED!

Professor Montgomery is a world-renowned theologian and international lawyer with a long standing ministry of research, teaching, writing, and successful defence of religious liberties in the courtroom.

Some have found it hard to believe that one man can achieve in two worlds what others do not often reach in one. But the topic of this study demonstrates that at heart level one finds the same person who, with the mind of a lawyer and the faith of a theologian, has become one of the most brilliant thinkers of our time in defending the Christian faith.

The theologian can learn from this study not to separate his or her life from created reality—while those who think like lawyers can learn that clear reasoning does not tear them away from our Christian heritage but rather reinforces the conviction the Jesus is indeed the Way, the Truth, and the Life. 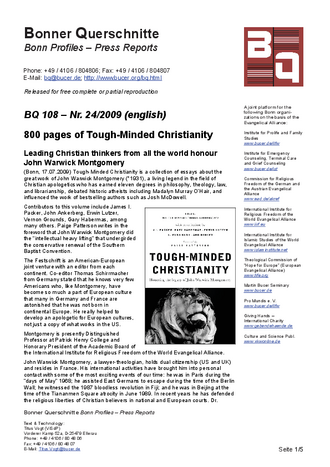