Schirrmacher meets with Victims of Attack in Alexandria

(Bonn, 18.08.2011) The Director of the International Institute of Religious Freedom, Thomas Schirrmacher, has personally met with two eye witnesses of the attack on a Coptic worship service in Alexandria. Both victims were badly injured but survived and were operated on in Germany. Twenty-three people died in the attack. In additional, smaller attacks and assaults approximately the same number of Coptic Christians have died in Egypt since January. 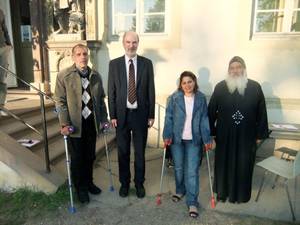 Shortly after midnight on January 1, 2011 a car bomb exploded with approximately 100 kg of explosives in front of the Al-Qiddissine Church in Alexandria. This was after police, who due to warnings had guarded the worship service, conspicuously withdrew from the area. Of the around 1,000 visitors at the New Year’s worship service, ninety-seven were injured, among them eight Muslims, and twenty-one were killed. Two of the injured died on January 4, 2011 while receiving hospital treatment. After Cairo, Alexandria is Egypt’s second largest city with 4.4 million inhabitants.

In the conversation, Schirrmacher pointed out to the victims that the early church as well as the fathers of the Coptic church not only viewed Christians who died on account of their faith as martyrs. Rather, they also considered those who survived attacks on their lives to be martyrs. For that reason, it was an honor for him to personally learn about the faith of living martyrs.

Bishop Anba Damian, who was present at the two days of discussion, pointed out that the Coptic church has never been a state church and from its beginning – not only since Egypt was conquered by Muslims – has had to assert itself in a hostile environment. For this reason one also calls it the ‘church of martyrs.’

[The following quote is offered to you as background information in case you wish to produce your own report.]

The words of the Bishop: This is a component of our history and the tradition we have lived out. We as Coptics have our own calendar, the calendar of the martyrs. This begins with Emperor Diocletian in 284 A.D. At that time the persecution of Christians was at its worst. Within five years more than one million Copts were killed. Some of our martyrs are also known in Europe, such as Holy Mauritius as the patron saint of the Magdeburg Cathedral and Saint Cassius and Saint Florentius, the patron saint of the city of Bonn. In Cologne there are two additional martyrs who are especially revered: Saint Gereon and Saint Victor. Times have not always been rosy for Copts. One speaks of around one million martyrs since the seventh century up to the present day. We have had to carry our cross over the course of our history, and our cross has always been something other than light. We try to deal peacefully with Muslims, for that is the teaching of our Bible. That there are still Christians who live in Egypt today counts as a true, or as an eighth, wonder of the world. When Islam came to Egypt, we were oppressed by the Romans. Copts actually hoped to be freed by Islam. And it actually came to that. The beginnings were very peaceful, such that the Copts did not offer any resistance. In contrast, we even paved the way for Muslims in our country. The first Muslims were very favorably disposed towards us. We have nothing against Muslims. The one thing which I wish for in my life and of which I dream is the right to be allowed to live in peace and to live out our Christian tradition. . . . My wish is that every person has the right to choose his religion or to change his religion or denomination without being punished or rewarded.”

Damian expressed his dismay at the fact that so little is done in German churches and German politics for Copts, even by those who after all loudly point out injustices with their words. It is often the case that churches in Germany only give donations to churches of their own denomination in Egypt. The Coptic church, however, now needs local practical solidarity as well as any possible political pressure that can be applied on the Egyptian government.

Bishop Anba Damian, who was born in Cairo in 1955, has been the General Bishop of the Coptic Orthodox Church in Germany since 1995. He is thus a pastor and contact person for approximately 6,000 Copts in eight Coptic Orthodox congregations in Germany. His official residence is a monastery in Höxter-Brenkhausen. Damian has lived in Germany since 1981, studied medicine, and was a senior physician in radiology from 1988-1991 in the Mühlacker District Hospital (Enz district).

Damian is thereby one of fourteen international Coptic bishops globally, looking after Copts who are emigrating in increasing numbers due to long-lasting and increasing oppression and discrimination in their home country. On the basis of their good education and high qualifications, they are able to quickly integrate everywhere, including Germany, and do not have the problems of some of their fellow countrymen who are Muslim.

Of the 85 million inhabitants of Egypt, 86.7% are Muslim, 12.8% Christian, and 0.5% (= 422,000) are non-religious. Christians comprise primarily 9.4 million Copts. In addition to them, there are 1.4 million Christians of other persuasions. 4.6% of the population is considered to be Evangelical, and the larger portion of this number is found within the Coptic church.

Entry regarding the attack and made in the book of condolence of the Coptic church in Alexandria:

They died with faith in Christ, who died for their salvation and who alone can overcome the evil that is expressed in this bloody deed. May the Lord grant the Coptic church and all Coptic Christians the courage to believe and the wisdom for an appropriate reaction!

Prof. Dr. Thomas Schirrmacher in the name of the World Evangelical Alliance

·         Comment by Christine Schirrmacher in the Germany newspaper the Frankfurter Allgemeine Zeitung:

·         Comment by Thomas Schirrmacher in the German newspaper Die WELT: 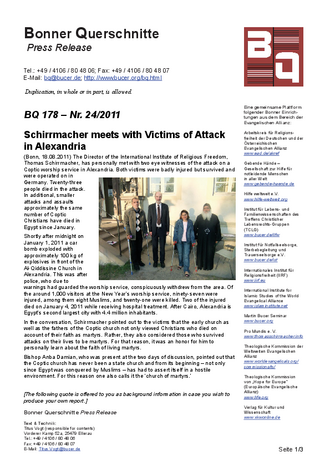