(Bonn, 04.05.2020) Christine Schirrmacher, scholar of Islamic Studies at the University of Bonn (Germany) and the Theological Faculty Leuven (Belgium) has recently been reappointed to the Board of Trustees of the German Institute for Human Rights (Deutsches Institut für Menschenrechte, or DIMR) in Berlin as a representative for academic institutions related to human rights. All parties of the Parliament unanimously voted in favor of Christine Schirrmacher who has been proposed to serve for a second term by the two ruling parties, CDU and SPD. 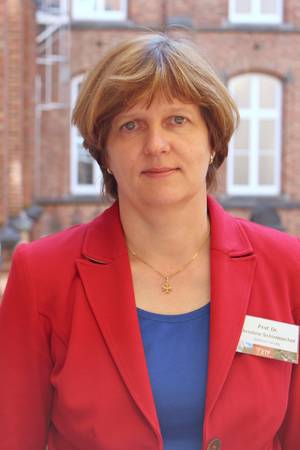 The Director of the Institute, Professor Dr. Beate Rudolf, who prior to her present post had taught public law, international law, European law, and gender equality law in Düsseldorf and Berlin, congratulated Schirrmacher because of her reappointment. Schirrmacher will belong to the body for another four years. Serving on the Board of Trustees is limited to two times four years.

The 18 member board, to which representatives from civil society, academia, the media, and politics belong, establish the content-oriented guidelines for the work conducted by the institute. In accordance to a June 2015 law addressing the legal position and duties of the German Institute for Human Rights, Schirrmacher belongs to a group of four individuals appointed by the German Parliament (Bundestag) through its Committee on Human Rights and Humanitarian Aid. In addition to Schirrmacher, the German Parliament appointed Prof. Dr. Markus Krajewski (Center for Human Rights Erlangen-Nuremberg, or CHREN) as representatives for academic institutions with a human rights connection. Furthermore, Martin Lessenthin, board spokesman for the International Society for Human Rights (Internationale Gesellschaft für Menschenrechte, or IGfM), and Dr. Anja Nordmann of the National Council of German Women’s Organizations (Deutscher Frauenrat) were appointed as representatives of civil society.

The German Institute for Human Rights is a body of civil society with headquarters in Berlin. As an independent national human rights institution in the sense of the United Nations’ Paris Principles, it is to inform the public of the domestic and international human rights situation as well as contribute to the promotion of and protection of human rights. The Institute implements these goals through political consulting, research, human rights education, and information as well as documentation. A particular concern of the institute is to make international and European mechanisms of human rights protection in Germany better known and more useful. 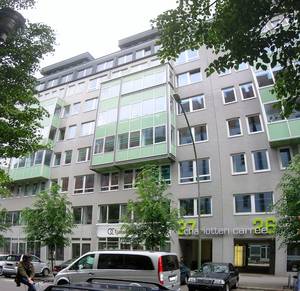 On various occasions, Christine Schirrmacher has been invited as an expert in connection with hearings on human rights questions in the German Parliament and has grappled with human rights questions in research and publications. She has published repeatedly on Islamic human rights declarations, on women’s rights, on the rights of minorities as well as freedom of religions and worldviews in countries characterized by Islam. Recently she published the book ‘The Oppression of Women’ [Original title: ‘Unterdrückte Frauen’] and her revised postdoctoral thesis ‘Let there be no Compulsion in Religion (Sura 2:256): Apostasy from Islam as judged by contemporary Islamic Theologians’, as well as the compendium ‘Can Freedom Be Unlimited? Examples of Censorship in Middle Eastern Societies in the 19th and 20th Centuries’ (with Haggag Ali and Stephan Conermann) and the essay ‘A Discourse on Human Rights and Civil Rights and Liberties in Muslim-Majority Societies’ in the Polish Yearbook of Oriental Studies. 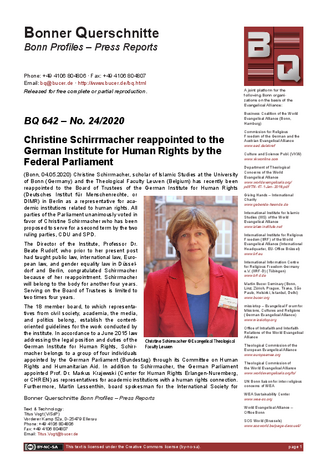