(Bonn, 26.10.2010) Christianity wants to show that it totally rejects abuse and all physical or mental violence, said the director of the International Institute for Religious Freedom of the World Evangelical Alliance, Thomas Schirrmacher (Bonn), on Wednesday evening at the 3rd Lausanne International Congress on World Evangelism in Cape Town. 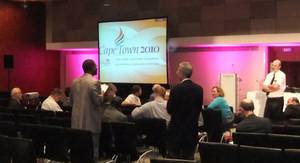 The coming code of ethics is in favor of mission, however it will condemn all immoral forms, such as psychological pressure or material incentives for people who want to change their religion, said Schirrmacher, who is a sociologist of religion and the Spokesman for Human Rights of the Evangelical Alliance as well as founder of the International Institute for Religious Freedom (2006).

According to statements from the Vatican, the World Council of Churches, and the World Evangelical Alliance, such a document will be jointly adopted. The World Evangelical Alliance claims to be a platform worldwide for more than 400 million theologically conservative Christians from more than 120 countries. The World Council of Churches, a coalition of Protestant, Anglican, and Orthodox churches, represents more than 500 million Christians. The Vatican represents more than a billion people. The three organizations together represent 97 percent of all Christians.

A code of conduct for religious conversion has been discussed among Evangelical and Protestant leaders for several years, in dialogue with the Roman Catholic Church. Conversions not only lead to controversy between religions, but they can also contribute to intra-Christian tensions. The original plan was to accept a code of conduct this year, but careful deliberation has required extra time.

Peter Beyerhaus, professor emeritus of missiology from the University of Tübingen, supports a code of ethics for missions. Missions often have a bad  public reputation, he said in Cape Town. Only if you carefully define both the freedom for mission and the limits of the mission can these allegations be properly challenged.

More than 4,000 evangelical mission leaders and experts from 190 nations met until October 24 at the 3rd Lausanne International Congress on World Evangelism in Cape Town. Christians from the entire world discussed the future of the churches and the possibilities of missions. 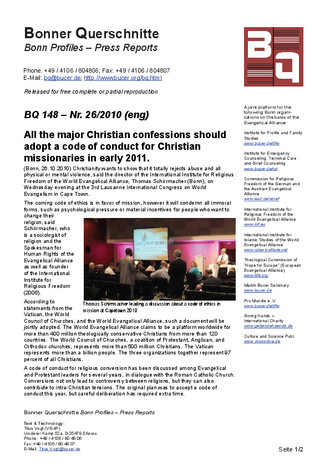