Archbishop Akta? informs the World Evangelical Alliance about the Situation at Mor Gabriel

(Bonn, 26.08.2011) The Director of the World Evangelical Alliance’s International Institute for Religious Freedom and Board Member of the International Society for Human Rights (ISHR), Thomas Schirrmacher, has been personally informed of the status of negotiations surrounding the threatened Syrian Orthodox Monastery Mor Gabriel by the abbot of the monastery and by the monastery’s attorney.

At the meeting, the monastery’s abbot, Archbiship Timotheos Samuel Akta?, emphasized how important international support of the monastery is. Akta?, who was born in 1945 in Tur Abdin, has been the abbot of the monastery since 1973 and the Archbishop and Metropolitan of Tur Abdin since 1985. 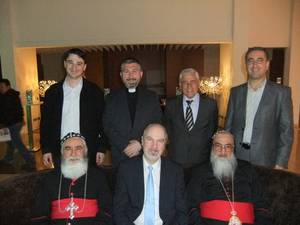 Archbishop Akta? and Schirrmacher have been bound together for a long time by the following: Both are recipients of the Finnish ProFide Human Rights Prize, and both have been honored for their efforts in connection with Iraqi refugees. Akta? was honored in 1993 for his efforts in connection with refugees during the Second Gulf War, and Schirrmacher was honored for efforts surrounding present-day refugees since the fall of Saddam Hussein.

The Mor Gabriel Monastery has been under massive pressure by the Turkish state for years. A number of lost court cases, in which neighboring Kurdish villages have used absurd reasons to contend for land belonging to the monastery for centuries, is threatening the very existence of the monastery. Archbishop Akta? is convinced that the Turkish state is using the court cases as a pretext for driving remaining Christians out of southeast Turkey. An indication of this is the fact that the monks are not allowed to instruct any students within the monastery walls and thus cannot pass on centuries- long traditions to the next generation.

The Mor Gabriel Monastery was founded in 367 A.D. and is one of the oldest monasteries in Christendom. The cupola, with a diameter of 11.5 meters, dates from the 6th century and has been considered an architectural masterpiece. In 1915, during the time of genocide against the Christian minority, all the inhabitants of the monastery were killed by militia at the instigation of the Ottoman government. A seminary for priests was established in the 1950s after renovation work was completed, and in 1980 the Turkish government closed and prohibited it from further operation.

Communiqué from the ISHR

The International Society for Human Rights has called on Germany’s Federal Foreign Office and members of the German Parliament to stand up in defense of the Christian Mor Gabriel Monastery in eastern Turkey. Germany should protest the virtual expropriation of the monastery and make further EU membership negotiations dependent upon respect for the rights of the Christian minority in Turkey, according to an appeal made by the ISHR. The Mor Gabriel Monastery, which dates back to the 4th century, counts as one of the oldest sites of the Christian faith in Turkey and is “the last spiritual sanctuary for Christians in southeast Anatolia.” One hundred years ago there were still about 950,000 Assyrian Christians living in the region of Tur Abdin. It is now feared that the remaining 2,500 -3,000 Christians will have their spiritual center taken away and see it converted into a property for tourism, the ISHR said. The organization pointed to the historically “absurd charge” that prior to the building of a monastery a mosque had stood on the property. Claims that the monastery had to give back allegedly stolen goods attack the “foundations of tolerance on the part of the Turkish state over against religious and ethnic minorities” and lacks respect and a willingness for understanding other spheres of cultural. The offer to lease the land to the monastery was referred to by the ISHR as “a further form of the policy of expropriation over against the Christian minority.” European politicians should not accept this. The organization called upon representatives of the German Parliament and the government to support the Christians’ legal actions against the Turkish state. Without Turkey’s providing property and human rights protection, there should be no negotiations regarding EU membership, according to the ISHR.

Links for background research on the topic:

BQ 79 on the ProFide Prize 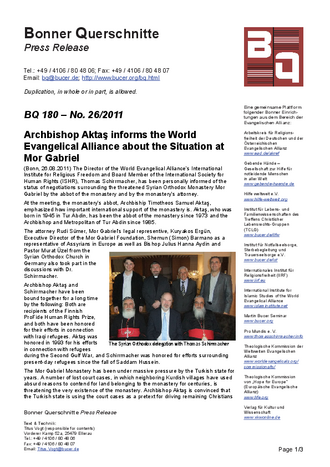