“His work made a pronounced difference in the lives of persecuted Christians.”

(Bonn, 10 November 2008) The Bonn based human rights activist, Thomas Schirrmacher, received this year’s “International Pro Fide Award” from the Finish organization “Friends of the Martyrs,” for his ongoing international efforts on behalf of persecuted Christians and followers of other religions. The award money will be used on behalf of Iraqi refugees. 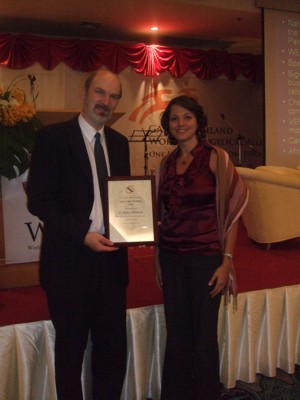 Since 1991 the annual award has been granted to a person “whose work has made a pronounced difference in the lives of persecuted Christians.” Some of the previous recipients include Richard and Sabina Wurmbrand (Romania), Archbishop Samuel Aktas (Turkey), Bishop Paride Taban (Sudan), Bishop Laslo Tökes (Romania), and Godfrey Yogarajah (Sri Lanka).

The award ceremony was part of the General Assembly of the World Evangelical Alliance in Pattaya, Thailand, with about 600 people present. It came at the end of a two hour panel discussion on the themes of freedom of religion and the persecution of Christians, with participants from all the continents. The award was presented by the Lutheran pastor, Johan Candelin, religious freedom advisor to the Finnish Parliament. Candelin especially emphasized that the recipient and his team have made the problems of the persecution of Christians and the denial of religious freedom a well documented matter of public knowledge, trusted by academics, politicians, and the media.

Because the recipient was especially thanked for efforts to assist Christian refugees from Iraq in Jordan and Syria, the Legal Advisor from the UN Refugee Commission for Jordan, Yara Hussein, participated in the discussion and award ceremony. She congratulated the recipient in the name of the UN Refugee Commission and thanked him for his international engagement on behalf of Iraqi refugees in Jordan and Syria. He played an essential role in bringing this theme into international public discussion, so that Germany, the EU, the US, and Canada now plan to accept groups of refugees from Iraqi minorities.

The International Director of the World Evangelical Alliance, Geoff Tunnicliffe, explicitly endorsed the International Institute for Religious Freedom led by Thomas Schirrmacher. He emphasized that Schirrmacher’s institute is addressing concerns which also have been central for the WEA since its beginning. 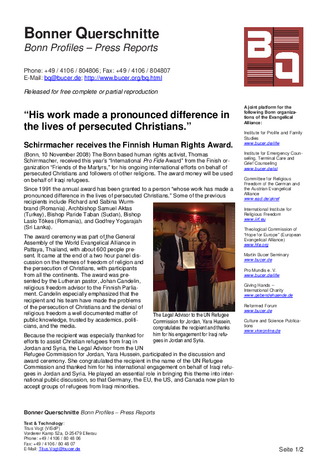