(Bonn, 19.10.2009) The humanitarian aid agency Giving Hands (Gebende Hände in German) has taken a public stand against the well documented and sometimes violent racism practiced against the Roma and Sinti peoples in eastern Europe by means of supporting a Roma medical student from a poor background who has just received his Doctor of Medicine degree. Working with a Czech think tank ‘The Comenius-Institute’, which is jointly led by local Christians with Martin Bucer Seminary and the International Institute for Christian Studies, Giving Hands is seeking to both change the life conditions of the Roma (often without education or medical care) and also help them to earn a higher level of social recognition. 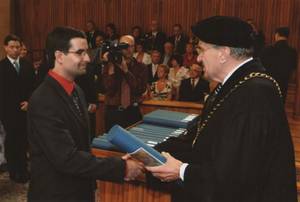 The director of The Comenius Institute, Prof. Dr. Thomas K. Johnson, commented on the occasion of Vladimír Cervenák‘s doctorate at Charles University, that the support of the Roma carries great symbolic significance in contrast with the horrendous ideas and actions of the Czech neo-Nazis. This type of assistance recognizes the dignity of the Roma, while Cervenák’s work as a physician should help address the serious medical problems found among his Roma people.

Prof. Thomas Schirrmacher, Giving Hands Board Chairman, used the occasion to note that racism is too often regarded as merely a problem of the past, something like the persecution of the Jews under the Third Reich or slavery in the USA. The tendency to despise and suppress the Roma and Sinti, along with the persecution of Jews and Blacks, has been one of the three major historical types of prejudice seen in much of the world; it is still far too widely encountered in Europe.

A disturbing part of social life in much of eastern and southern Europe is the situation of the Roma (also called Romani or Gypsies). Descended from immigrants from northern India (and maybe Pakistan) in the middle ages, there are now several million living on the margins of society, often in isolated ghetto-like conditions or separate villages. Only a small fraction of Roma children graduate from secondary schools, although under Communism, at least some of the countries forced all children to attend school, and provided them, like other citizens, with all required basics such as textbooks and the compulsory uniform.

Many Roma have faced discrimination and prejudice from both private groups and national Governments. The Roma suffer the worst health conditions in the industrialized world together with some of the worst health problems associated with the third world. Rates of both infectious and non-communicable diseases are high. The proportion of Roma living in poverty exceeds 75% in countries throughout the region. There are reports of some living in caves and old shipping containers.

Little education, massive unemployment, discrimination, isolation, extreme poverty, terrible health conditions: the situation invites reactions, whether in compassion or in hostility.
The hostile reaction is seen in the way some neo-Nazi and skin-head type political gangs have talked about sending the Roma to concentration camps, as recently as 2008. The following is taken from an advertisement for a protest against Czech neo-Nazis:

You are warmly welcomed to a public gathering being convened by the civic association Tolerance a ob?anská spole?nost (Tolerance and Civil Society)

www.ecn.cz/tolerance/ on the 60th anniversary of the adoption of the Universal Declaration of Human Rights. The aim of this gathering is to draw attention to the rising neo-Nazism, racism and xenophobia which draws its strength from indifference.

For the first time since the WWII, neo-Nazis are marching through the streets of Czech towns intent on committing violence, spreading fear and provoking armed conflicts to an unusual extent. The neo-Nazis have found active supporters among ordinary people, and the passivity others only confirms that hatred, aggression and “battle for the white race” is legitimate, welcomed by society, and offends no one.

This year the neo-Nazis’ target has become the Roma; last year it was Jewish people. Next year it could be any of us. If we close our eyes to the neo-Nazi attacks, we endanger our own freedom, we endanger this democracy, and we become complicit in this state of affairs.

Let’s set aside what divides us and realize what unites us. Let’s say NO to racism and neo-Nazism.

The problem is clearly multifaceted. The widespread discrimination and poverty finds its counterpart in the internal cultural patterns of the Roma people, who have not always pursued excellence in education and hard work. On a few occasions the reputation of the Roma as “tramps and thieves” has been earned, though many are also honest citizens and good neighbors.

Solving a problem of this magnitude is far beyond the capacity of any person or agency. But the situation will not get better unless all the regional organizations with humane principles respond in compassion. A few years ago Giving Hands of Germany partnered with the Comenius Institute of Prague to sponsor university level education for a small number of Roma who are ready for advanced studies. The project is beginning to bear important fruit. In June, 2009, a Roma student in this program received his Doctor of Medicine degree from the medical faculty of Charles University in Prague. He will be one of the first Roma doctors of medicine in the region. We hope that he will be able to provide medical care in a Roma area, after completing his practicum in a Czech medical clinic. He should help with some of the serious medical need among the Roma, provide a good role model for young Roma, and help earn respect for the Roma people in the wider area in a manner that reduces prejudice.

In a report to Giving Hands, the Comenius Institute Director, Prof. Thomas K. Johnson included the following explanation: “One of the reasons our little Roma student program is very important symbolically is the growth of neo-Nazism in the area, some of which is specifically and openly anti-Roma. There was recently an anti-Roma riot, very strange, something hardly seen in Europe since the 1930s. We Christians want to help send Roma to universities to get good educations, not to concentration camps. Thank you for your crucial role.”
Whether we decide to respond to the Roma in compassion or in hostility is influenced by our view of human dignity. The Giving Hand/Comenius Institute program is based on the Christian view that all humans have a God-given dignity, because all people are created in the image of God. The need is immense. We would invite other civic organizations to do all they can to assist the Roma to reach their full potential; we would also invite other civic organizations to give an account of why they believe in human dignity, the basis for human rights and a humane way of life.

Dr. Johnson articulated his view of human dignity in his book Human Rights: A Christian Primer, World Evangelical Alliance, 2008. This book is available as a free download at the homepage of Martin Bucer Seminary, 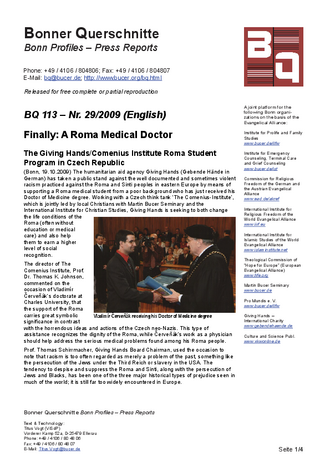