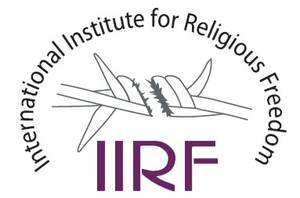 Never before in the history of the Christian church has such a large number of Christians been suffering persecution as today, the missiologist Sauer told German press service epd on Friday. He explained that this is only partly due to the rapid population growth and a phenomenal increase in the number of Christians worldwide.

As of November, the Evangelical Lutheran Church of Württemberg appointed Sauer on one of its own positions in order to second him as the Co-Director of the “International Institute of Religious Freedom” (IIRF) in Cape Town. Sauer, who also holds a doctorate in theology, has been appointed Associate Professor Extraordinary at the Department of Practical Theology and Missiology of the Theological Faculty at the University of Stellenbosch in South Africa. The 48-year-old minister of the Württemberg Lutheran Church is the co-founder of IIRF of the World Evangelical Alliance with offices in Bonn, Cape Town and Colombo. He is also the editor of the scholarly “International Journal for Religious Freedom”.

Christof Sauer, a minister of the Württemberg Church directs the “International Institute for Religious Freedom” in South Africa (picture)

Lutheran ministers usually work in a congregation, baptise, marry and conduct funerals. Christof Sauer is in a very unusual position: he is the only minister within all of Germany who is doing research in an institute in order to help discriminated and persecuted Christians.

He is a minister of the Württemberg Church and does not work in Swabia but in South Africa: the 48-year-old missiologist and expert of religious freedom has been appointed on a church position and seconded as the director of the “International Institute for Religious Freedom” (IIRF) in Cape Town. According to Sauer, who co-founded the Institute in 2006, the IIRF is doing extensive research in the field of religious freedom on the “highest academic level”, incorporating a large variety of disciplines.

For example, psychologists are researching the traumatic consequences of religious persecution and sociologists are comparing the degree of intensity of the oppression in countries with the most severe restrictions of religious freedom on an international level. The results of this kind of scholarly research have one common goal: The information is intended to serve advocacy for believers who suffer discrimination and persecution.

The ordained minister of the Württemberg Church is the co-founder of IIRF of the “World Evangelical Alliance” which is represented on three continents in Bonn, Cape Town and Colombo. In addition, Sauer publishes the scholarly “International Journal for Religious Freedom”. Sauer also holds a doctorate in theology and informed us that he has been appointed Associate Professor Extraordinary at the Department of Practical Theology and Missiology of the Theological Faculty at the University of Stellenbosch in South Africa as of October this year.

In the “Bad Urach Declaration” which was published by Sauer together with a team of 30 theologians a year ago, the IIRF appeals to governments and bearers of public office to protect religious freedom and all fundamental human rights. In addition, the 50-page document suggests how to theologically deal with the fact that Christians are suffering, persecuted and even killed. The Declaration calls upon Christians to support their persecuted brothers and sisters and to uphold them in prayer. Human rights experts estimate that approx. 200 million Christians are living in countries with severely restricted religious freedom and are partly suffering discrimination or persecution.

Prof. Dr. Sauer who studied theology in Tübingen/Germany and with his family has been living in Cape Town for the past eleven years, said: “In Germany we are living in peace, which is a wonderful blessing. But it must not be taken for granted.” Western Christians should learn from the courage of their persecuted brothers and sisters to hold on to their faith even under difficult circumstances, he added. Western Christians seemed to be lacking courage when it came to taking a stand for their faith in a pluralistic world. 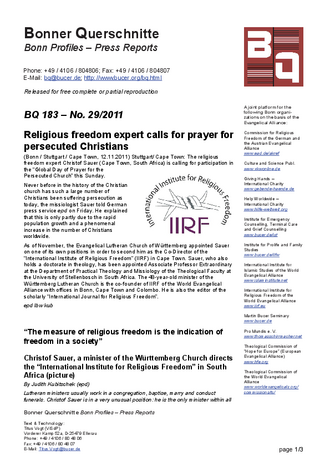