â??We Are Working Together for the Right to Convert Each Otherâ? â?? Charting a New Direction of Christian-Muslim Relations

(Bonn, 16.11.2021) For the past three years, the World Evangelical Alliance (WEA) has engaged in conversations with representatives of the worldâs largest Muslim organization, the Nahdlatul Ulama (NU) in Indonesia, to pursue the mutual desire to protect religious freedom for all. The emerging partnership led to the recent publication of a joint book titled âGod Needs No Defense â Reimagining Muslim-Christian Relations in the 21st Century.â WEAâs and NUâs hope is to chart a new direction for Christians and Muslims to engage with each other honestly and respectfully, even if they disagree with the othersâ beliefs. 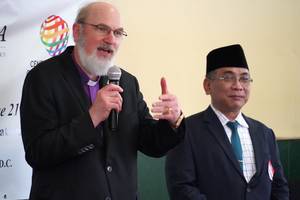 What some described as an âunlikely partnershipâ between the WEA, that represents and serves over 600 million evangelicals in 143 countries, and the NU, that represents some 90 million Muslims is rooted in the shared desire to counter radical and violent expressions of religion and build a safer and more peaceful world. Most foundational for living together peacefully is for the state and society to respect the right of any person to choose their religion, or as WEA Secretary General Bishop Dr. Thomas Schirrmacher expressed it: âWe are working together for the right to convert each other.â

In his thank you address at the book launch that took place in Washington, DC, in July, Schirrmacher noted that both Christianity and Islam experienced times in history where theological disagreements between the two religions, or even among different groups within the same religion, led to conflict or even war. On the other hand, there are also many examples of societies where Christians and Muslims live together peacefully and at times also cooperate on issues of mutual concern.

Conscious that some believers are hesitant about engaging with people of different faith in fear they might compromise their own convictions, Schirrmacher emphasized that inter-religious dialogue and cooperation does not contradict absolute truth claims. âIt is possible to advocate for religious freedom, social harmony, and inter-religious cooperation without sharing the convictions of other religious groups,â he said.

He also referenced the Resolution on Religious Freedom that was passed at the WEAâs General Assembly in 2008 that states: âThe WEA differentiates between advocating the rights of members of other or no religions and endorsing the truth of their beliefs. Advocating the freedom of others can be done without accepting the truth of what they believe.â

âRelativists, or people who lack firm, deep convictions about absolute truth, are much less capable of meaningful dialogue because they are no longer really sure what they believe. In contrast, significant collaboration can happen between groups who do know what they believe, because they can identify areas of clear agreement and work together in those areas,â Schirrmacher observed. He added that âconversely, freedom and harmony do not emerge automatically when religious communities or non-religious people give up their truth claims.â

Religious freedom has been a priority of the WEA since its founding in 1846. It was the first global faith body that advocated not only for religious freedom for evangelicals but also for those of different or no faith. The joint efforts with NU to promote peaceful co-existence and to allow the other to share their faith freely continue to build on this long tradition. 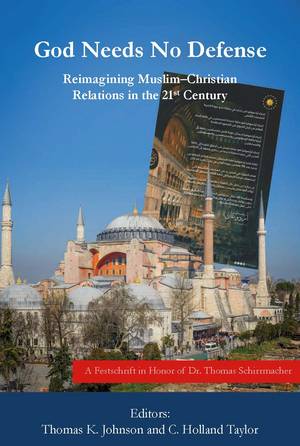 The topic also featured prominently in Schirrmacherâs inaugural address when he assumed the leadership of the WEA earlier this year. In remarks that were also included in the introductory chapter of âGod Needs No Defenseâ, he pointed out that the very idea of religious freedom and the need for a decision to believe based on free will is not simply a political principle, but it is integral to the understanding of Godâs love and His desire to be in a relationship with the humans He created. âGod Himself wants to be loved, wants us to trust Him, wants our life. He does not want us to pray to Him because we are forced or because someone paid us or somebody cheated us. He wants our very trust, our very heart and our very love, and love is something that cannot be forced,â Schirrmacher stated.

Dr. Thomas K. Johnson, who serves as WEAâs Senior Theological Advisor and Special Envoy for Engaging Humanitarian Islam, co-authored the book together with C. Holland Taylor, Chairman and CEO of the LibForAll Foundation and Emissary for the UN, Americas and Europe for Gerakan Pemuda Ansor, the worldâs largest Muslim young adults movement. In his speech at the book launch, Johnson explained the choice of the book title: âA pattern of jihads and crusades still captures the imagination of many. Think of 9/11 or the continuing conflicts in the Sahel and West Africa. When we say, âGod Needs No Defense,â this is what we have in mind. In place of military conflict as a way to âdefend God or a religion,â the book we are releasing today develops serious theological discussion of how to live together as good neighbors and how our faith communities can contribute jointly to flourishing societies. Serious discussion of principles must replace violent conflict.â

In a 2020 article for Christianity Today, Johnson pointed to the example of The Gambia as a fruit of the collaborative initiative with NU. The small West-African nation that is 95 % Muslim was on the verge of enshrining sharia law into its new constitution, which âwas causing alarm for both Christians and tolerant Muslims.â

âSchirrmacher found that some Muslim leaders in the Gambia had already heard aboutâand were favorably impressed byâthe WEAâs alliance with Humanitarian Islam. The engagement demonstrated that Christians and peaceful Muslims, although they often have cultural differences and misunderstandings to overcome, can be more politically effective and more persuasive in many countries when they work together,â he continued.

The joint efforts between evangelical Christians and moderate Muslims ultimately helped prevent sharia law from being included in the constitution. Referring to NU, Johnson commented: âWe have crucial religious differences, but these Muslims are seeking to enable people to live together in peace, and we should applaud them for doing so.â

Also in attendance at the book launch were WEA Global Ambassador Rev Dr. Brian Stiller and Dr. Christine Schirrmacher, Director of the International Institute of Islamic Studies, both of whom had been present at meetings with NU leaders on the side of WEAâs General Assembly in Jakarta, Indonesia, in November 2019; Dr. Paul Marshall, Academic Advisor on Religious Freedom to the WEA; and Timothy Goropevsek, WEAâs Chief Communications Officer. 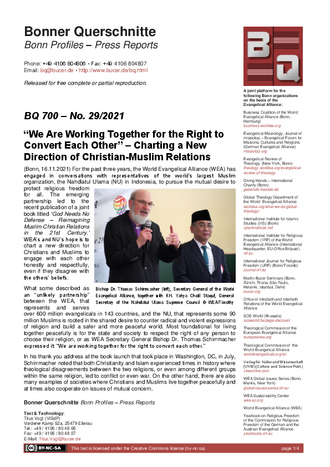