Council for the Protection and Promotion of Religious Freedom makes impact

67 religious bodies and organizations, including numerous Christian denominations and various influential individuals representing together approximately 8-10 million out of about 50 million inhabitants of South Africa have so far signed the Charter.

The co-director of the International Institute for Religious Freedom, Dr. Christof Sauer (Cape Town, South Africa) comments: “The Charter is an international novelty and uses the opportunity provided by the South African Constitution for civil society to collectively spell out specific rights as they see them in a charter instead of their establishment over a long period of time through case law. It is now crucial that the right avenues will be found in order that parliament will enact the Charter into law.”

He added: “Already the Charter is finding interest and emulation in other African countries. The enactment would create an international model that could have a wide impact.”

Rev. Moss Nthla, the General Secretary of The Evangelical Alliance of South Africa (TEASA), also a board member of the Cape Town Bureau of the International Institute for Religious Freedom, was elected as one of nine members of the Executive of the said Council. Both TEASA and IIRF are signatories to the Charter and have given their input into its drafting.

The Chairperson of the Council is Stellenbosch Professor emeritus for church and law, Dr. Pieter Coertzen.

·         South African Charter for Religious Rights and Freedoms, including an article by Iain T Benson describing its constitutional framework, formation and challenges (

Repository of documents related to the Charter 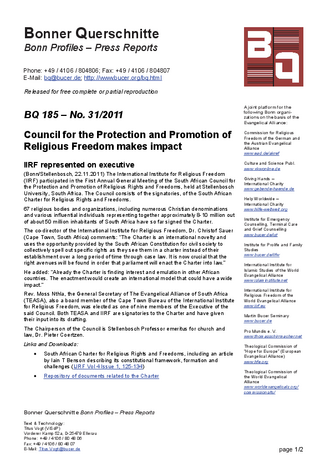